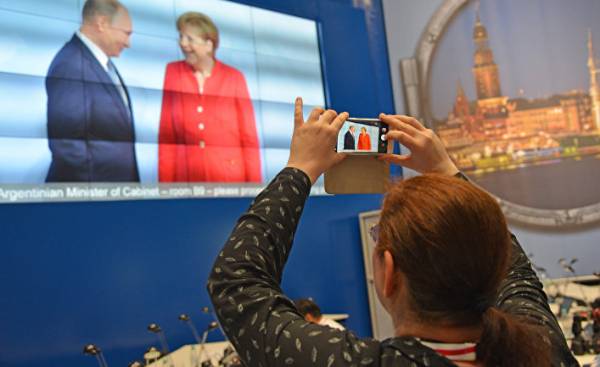 The group of 20 is so defective that this organization it’s time to save it from its troubles and misfortunes. The last summit of “Big twenty” in Hamburg, where Donald trump has destroyed the feeling of unity (what a surprise!), seems to be confirmed by the arguments that the G20 and the G7, is a club of richer countries, and therefore having a smaller size, reached the point of utter worthlessness and turned into a farce.

I do not agree with this. The G20 is needed as never before, and because of the fact that the American President takes his country into isolation. At least some unity is better than disunity, and a vivid example of this Paris agreement on climate change.

At the summit “the Big seven” in Taormina, Sicily, held in late may, trump said may terminate the participation of the United States signed in 2015 Paris agreement. He did so shortly after the summit, and no amount of persuasion and exhortation of the members of the G20 in Hamburg caused him to change his point of view. To cease means to stop.

But look what happened. 19 of the 20 members of this Association, including, China, India and Russia to stand together on climate issues like never before, isolating the United States. Published on Saturday the final statement of the G20 climate agreement is called “irreversible.” Of course, the Paris agreement will be weaker without the participation of the United States, which ranks second in the world in terms of pollution; but the deal, valid almost all over the world, in any case better than none.

When trump cancelled U.S. participation in the agreement gave rise to considerable concerns about the fact that now this deal will completely fall apart. But it has not collapsed. The Paris agreement was even supported by the mayors of the 50 largest cities in the world.

Of course, the G20 is for that love. Members of the organization at its discretion choose the most influential participants of “twenty”, this means that entire continents may be represented either insufficient or excessive.

Spain, whose economy is almost the same size as in Canada, does not participate in the G20 or the G7. From Latin America in the “Group of 20”, three countries (Mexico, Brazil and Argentina). And the whole sub-Saharan Africa represented only by one country — South Africa. This continent begins to dominate the world in terms of population and economic growth, while oil-rich Nigeria, with a population of almost 200 million people has the full right to membership in the “Big twenty”. Undoubtedly, it’s much more rights than the average performance with low growth rates, such as Canada or Italy.

No one wants to turn the G20 into G25, because this organization is already too bulky. But it’s time to drive out a couple of inconsequential players or to introduce a system of rotation to, for example, the leading country allocations of international aid and in terms of human rights protection, such as Spain or Norway, each year will receive a place at the negotiating table.

In addition, the G20 does not need such pomp, officialdom and expense. Some delegations, including the Americans, the Chinese and the Saudis, there are hundreds of people who arrive with a huge Armada of helicopters and armoured vehicles, and lease luxury hotels entirely. It’s obscene, unnecessary, and it takes the sponsors of such excess to the taxpayers a signal that the ruling elite is completely detached from the people. In essence the G20 (like the G7) is just a talking shop. It could be in any diner, fast food, and there it would be much more productive.

As for govorilo, the “twenty” in it. The “big seven” is too small, it is dominated by countries with low growth rates, and there is not included almost the entire developed world. The share of the G20 account for two-thirds of the world’s population, three-quarters of global production and 80% of greenhouse gas emissions that cause the warming of our planet.

At the summit of “twenty” in Hamburg there are no special achievements, except for the fact that 19 countries have rallied around the Paris agreement, which in itself is already a lot. The G20 turned into a mockery when nobody elected and incompetent Ivanka trump at one of the meetings took the place of his father, strengthening throughout the world the impression that the Executive branch of the U.S. most important of all family ties. The G20 failed to unanimously approve a statement condemning the provocative missile tests of North Korea, although it is one of the most pressing security issues in the world.

Trade issues in the best case, brought a partial victory for the United States and G19. In the final communiqué about the trade says that the G20 promises to “continue the fight against protectionism.” But as a nod to the Americans, it acknowledged “the legitimate role of instruments in the protection of trade.” Such a formulation may be a prelude to trump’s promise to impose duties on steel imports.

After trump’s participation in the meetings of the “seven” and “twenty” it became obvious that his national security Advisor to Herbert McMaster and economic Advisor, Gary Kohn (Gary Cohn) wasn’t kidding when I wrote in may that believe the world is “arena”, where countries “interact and struggle for advantage.” The American view is that the world is a jungle in which survival of the strongest, the smartest and the meanest.

That is why it is important “Big twenty” — and to a lesser extent the “Big seven”. A significant part of the non-American world, and especially Germany, led by Angela Merkel still believes in alliances, multilateralism, consensus and diplomacy, because the world is faced with common problems, ranging from pollution to terrorism.

The G20 often do not reach their goals. But it will not achieve anything at all, if dissolve itself due to the fact that one man by the name of Donald trump suddenly decided to show his temper. The evidence of the Paris agreement on climate change. 19 statements in support of it— worse than 20, but much better than none. If we want to see in the era of trump has maintained its existence to the principle of multilateralism, the “Big twenty” should not be allowed to die due to the fact that one person treats her without respect.