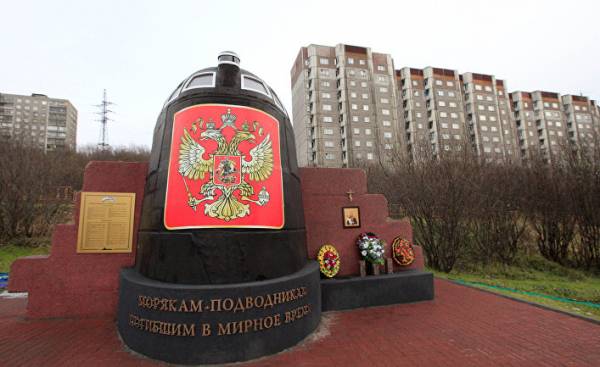 There wasn’t much left that can remind the visitors in the great Arctic city of Murmansk on the submarine “Kursk” and its sad fate.

“Kursk”, also known as the submarine “K-141”, was assigned to the Russian Northern fleet in the closed city of Severomorsk.

But on top of a hill on the outskirts of Murmansk it is still possible to find a fragment of the wheelhouse of the submarine “Kursk” which went down August 12, 2000, after two explosions occurred, apparently because of defective torpedoes.

During 10 days in autumn 2000, the “Kursk” was the main material of the media in Russia and abroad, while there have been unsuccessful attempts to get inside the submarine lying at a depth of 100 meters in the Barents sea 200 km North of Murmansk.

When Norwegian divers eventually managed to get inside the submarine on 21 August, it quickly became clear that all on Board were 118 crew members died, although some of them within a few hours after the explosion was still alive. 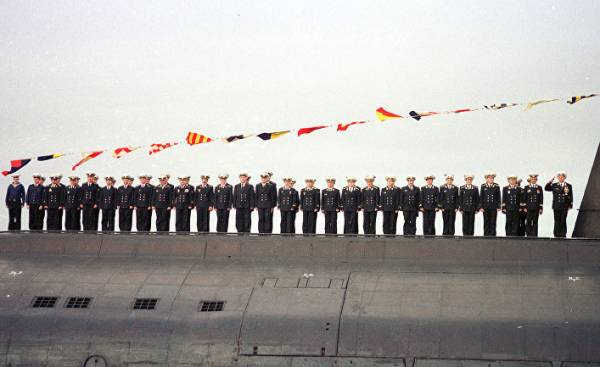 Then oblivion quietly enveloped the submarine and her crew.

In the years following the disaster, relatives of the deceased crew received apartments in other regions of Russia, and now they are scattered across the country.

The authorities of Murmansk were in no hurry to put a monument dedicated to this event, which many perceived as a dark page in the history of the Navy. It was not until until in 2009, photographer Lev Fedoseyev together with a local journalist began to wonder what exactly happened to the cabin “Kursk” after the submarine eight years ago, was raised from the bottom of the Dutch firm and then sent to scrap.

“We found her in a scrap yard, photographed and wrote the article. It helped to move the thing,” says Fedoseev.

Today the cabin “Kursk” is part of the monument, as it says here, “to seamen-the submariners who died in peacetime”.

Many of the disaster

We are not talking about a few submarines. On the plate of the monument lists the 14 victims of Soviet submarines and the Russian Navy and 26 of the disasters which inevitably resulted in casualties.

But the death of the “Kursk” it is necessary to allocate especially if we talk about the scale of the losses and the reaction of the society. Submarine “Kursk” was relatively new. She entered service in 1994, and the accident occurred when she participated in the first in many years, large naval exercises, which caused even greater harm to the prestige.

In contrast to the Soviet time when it was possible completely to silence almost any catastrophe, the tragedy with the “Kursk” happened in the moment when the Russian press could publish sharp article. Therefore, the event received very wide publicity in all of the big country.

Then there was the whole cohort of self-proclaimed experts on “Kursk”, which put forward a more or less detailed theories about the causes of the disaster — for example, that the submarine was sunk by an American torpedo, or what was on Board Chechen suicide bomber.

The tragedy has left traces also in the arts, particularly in Hollywood was filmed on the basis of events related to the “Kursk”.

The armed forces are in decline

In Russia in some areas, and today you can see the consequences of the disaster of “Kursk”. She had a strong influence on the Kremlin and on the way the military and political development on which the country entered during the reign of Vladimir Putin.

The Russian armed forces in the years before the crash, was in full decline. If in the last years of the Soviet defense budget was approximately $ 300 billion in the late nineties, it fell to $ 20 billion a year, according to the Stockholm Institute for peace studies (SIPRI).

Military equipment inherited from the Soviet Union, was worn out, theft and corruption struck a significant portion of the officer corps, there was no money for the maintenance of equipment or the development of new models.

The attitude of the military leadership to disaster also caused a storm of criticism.

“Very sorry to see it all. After all, the crew probably could have been saved,” says local historian Dmitry Korzhov.

In the first days after the tragedy, the leadership of the Northern fleet and the Russian defense Ministry apparently tried very hard to conceal and hush up the incident, rather than to organize rescue work.

Consent to foreign aid was given only after hope of finding survivors on the submarine completely disappeared.

“That tragedy “Kursk” could occur, evidence of the condition of the fleet at that time. Today the situation has changed,” says photographer Lev Fedoseev.

The loss of the submarine showed the rulers in the Kremlin, how is running situation in the Russian armed forces. The tragedy helped to launch the upgrading, which significantly accelerated in the zero years.

“You can perceive the tragedy of the “Kursk” as the “point of no return” of the Russian armed forces. After it became clear that something must happen”, — says Dmitry Korzhov.

The tragedy of “Kursk” became a kind of benchmark for Russia. At that moment, in less than 100 days after the accession of Vladimir Putin as President, and the actions taken in connection with the tragic events that caused a barrage of criticism — was criticized not only the generals, but also the President.

Putin was on vacation in the resort city of Sochi in southern Russia, and it took five days before he decided to interrupt rest and to take the matter under his personal control in Moscow.

The press harshly criticized the President, caught in his first real media storm, which he clearly preferred not to pay attention. So when Putin on 22 August, finally arrived in Murmansk, he made accusations to the media in a way that promised nothing good for them and their owners.

He said that on TV there are people who shout louder than others, but which are themselves in a period of 10 years destroyed the army and Navy, where people die today.

The media reacted instantly. One journal was printed a transcript of the meeting where the relatives of the dead sailors sharply spoke with Putin, and secret recordings of presentations at this meeting have been reproduced in the popular television programme of the ORT channel, which went all over the country.

This led to a massive attack of the Kremlin on the press. Daring TV show was immediately taken off the air, and the true owner of ORT billionaire Boris Berezovsky was forced to sell his share of the channel.

After that Berezovsky and the other big media magnate Vladimir Gusinsky was forced to emigrate, after which their channels have been integrated in a media organization, controlled by the Kremlin, and for 15 years they have become a powerful propaganda weapon of Putin.

“From the submarine “Kursk” the struggle of Putin with those who “bought the media and manipulate them through public opinion” — that is, in fact, with all the media that are not under direct control,” — says Mikhail Zygar in his book on the Putin years and all the President’s men.