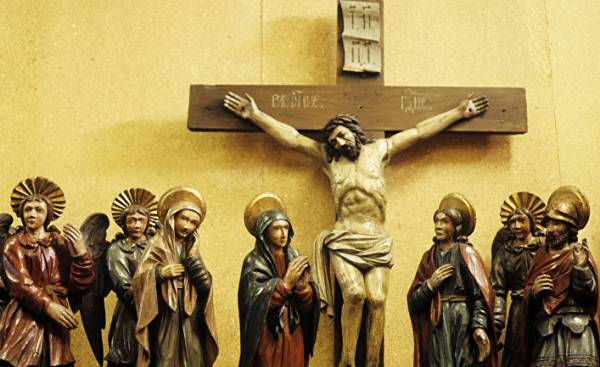 History teaches us that Christianity and democracy are impossible to reconcile. This truth is demonstrated repeatedly and thoroughly analyzed, many centuries disseminating the resulting findings, however, the relentless army of “Christian Democrats” tries to mix these two phenomena, not noticing that the resulting hybrid is a funny, artificial, and barren.

All errors and heretical deviations in the bosom of the Church arose from attempts to bring democracy to the hierarchical nature of the Institute, the Foundation for which is the authority of God, not interpersonal contracts. If we look at the teachings of Wycliffe, Luther, or Calvin, ideas conciliarism, febronianism or movement “We are Church”, we find in them the seeds of democracy.

This place indignant “Christian Democrat”, of course, argue that Christianity was and remains democratic in nature, but in the past it was not in the spirit of the times. This is not so. The best proof is the present: the era of almost unbridled democracy, which have been transformed from a system of appointment of state managers in the overall ideology and even state religion, which is based on a magical ritual. Democracy has now become a cult object. God in the modern democratic world ceased to be the highest good, doesn’t make them people, what matters is democracy. Isn’t this idol, idol, idol, about which warns us the first commandment?

The truth has no place

Is it possible in this case to reconcile democracy and Christian morality? No, because in a democracy there is no place for the truth. It the saddle the different, conflicting opinions, and the truth remains for those who gathered more votes. But what about values, morals, commandments? In a democracy or they don’t exist, or are even considered braking force that should be as fast as possible to neutralize (i.e. destroy). The essence and Foundation of democracy is an agreement between people. If we agree that to surrender unto the abominations of the normal, because it gives us physical pleasure, which stands for human core value of Christianity would automatically turn into public enemy number one or itself will include these abominations in the list of most important good deeds. The third is not given.

“If man becomes the ultimate authority and own Creator, the verdict about what is good and what is bad, shall be made by majority vote. Things are not divided into good and bad, and those that fell or got away with it. (…) There is no spirit, there is no absolute. Good and evil are in the hands of the Parliament, as the ban on gambling or the sale of alcohol after half past ten in the evening,” aptly noted English writer William Golding (William Golding). The rejection of the ancient Holy principles in a democracy is a successful alignment of forces in Parliament a five minute job. So a fully democratic system that fully respects Christianity is an illusion or a pipe dream.

What it all means? To absurdity. An example in this regard can serve as Anglicans whose bishops by a majority of voters refused the dogma of the existence of hell. Commenting on the event, I wondered whether the sign of God is the law, and dared to suggest that he shouldn’t do it, or he can be impeached. So soon happened: Anglicans voted with their feet, choosing instead the Church other forms of spiritual activity.

The lesson of democracy

If appropriate this kind of thinking on Good Friday? Should we not be in the day when Christ died, rather, to set aside from such questions about the earth and ascend to the top of a transcendent eschatological contemplation of the mystery? Again with all this politics associated with so much controversy and aggression, maybe in the Easter tridenta focus on your own soul? Holy words! My text, however, is aimed precisely at this, and at the same time he reminds us that reflecting on their actions, we should not forget about the public sphere, because that is where lies the root of the most serious sins.

You can’t let starry-eyed idealists to catch us in his trap and eliminate reflections from spiritual political issues, because (especially in a democracy), there is no sphere of life that is not in contact with politics. No other day is as good for thinking about democracy, as good Friday, which democratic procedure became the basis for the killing of Christ.

Good Friday teaches us a beautiful lesson of democracy. In the province originated the mass public movement, which the authorities saw as a threat to their privileged position. They were afraid of their Leader because “all the people were astonished at His doctrine” (MK. 11:18). At a closed meeting influential lobbyists, a decision was made to eliminate the risk, has not been without controversy that stopped the spectacular demagogic admission of Caiaphas: “you know nothing, and I do not think that it is better for you that one man die for the people than that the whole nation perish” (Jn. 11:49-50). It is important only that all this did not happen during the feast, “lest there be an uproar among the people” (Matt. 26:5). For the holidays in Jerusalem was attended by many pilgrims from the province and that they, the people in remote from the capital regions, cut off from the life of the people “elite” feared the most.

At the mercy of the demos

Christ lawless lawless was arrested and condemned. How is it democratic when you have the majority! Later Jewish demos, spurred on by the influential Pharisees who voted before Pretoria that he was crucified, and the disciples could not do anything about it, because they were in the minority. In this context, recalls the only democratic instrument — the public opinion poll. About how it is ineffective shows a comparison of good Friday with the day of the Lord’s Entrance into Jerusalem. The crowd, which enthusiastically threw at his feet his clothes, beat carrying the cross of a man and spit on him. Love the demos are very changeable…

On the other hand, how do we know it was the same crowd? The arrest and the process was a secret and many people sympathized with the Christ, did not know what was happening to him. In addition, the events unfolded on Friday, when the thoughts of the Jews were concentrated on the coming Sabbath, and in that moment, and in the preparation for the Passover. Most likely, there was used another tool of democratic representation. People, as you know, eating caviar through their representatives (though not always their own). This could happen in the day of the Lord’s passion. We know that the Jewish elders attracted false witnesses: “many gave false testimony against Him” (MK. 14:56). Perhaps in the group of those who shouted “let him be crucified” was most carefully chosen.

This explains why the crowd was so blind. Pilate unsuccessfully three times declared the innocence of Christ, but the poor people through their representatives uttered the worst blasphemy: “we have no king but Caesar” (Jn. 19:15), in fact, renounced God.

Easter tridente, the time of hard thinking about himself and the world, should demonstrate to us that the events, which are remembered these days, is not the case of bygone days. This is a lesson that does not lose its relevance not only in a purely religious sense, as reflections of a religious character in our time are required to call thoughts about the socio-political sphere. After all, we were created “political animals” — creatures that by their social nature are committed to the common good.