A two-day visit of U.S. Secretary of state Rex Tillerson in Russia ended yesterday’s meeting with Minister of foreign Affairs of the Russian Federation Sergey Lavrov and talks with Russian President Vladimir Putin. According to the results of the United States and Russia agreed to establish a working group to stabilize bilateral relations. However, according to experts, the breakthrough has not occurred, but the parties are willing to dialogue.

Meeting Tillerson and Lavrov lasted five hours. Two gossekretat the United States held by Vladimir Putin. The talks were held in a closed format, but the main message of the participants said during the press conference.

“Two major powers, the nuclear powers can’t be in that state of Affairs,” said Tillerson.

However, as Lavrov said, Russia in Syria does not rely on any of President Assad, nor to anyone else. According to him, to resolve the situation, it is important “not to remove a particular character from the political scene, and to agree on how it will be organized by the Syrian government that it is democratic, that it was secular”.

The Russian Minister noted that in achieving such a consensus, which requires the development of a new Constitution, “questions the fate of individuals will be addressed much more effectively without any tragic consequences for the state and the country, for the people.” Lavrov said that the overthrow of the regime in Syria may result in a loss in the fight against the terrorist group “Islamic state”.

“I hope that will prevail people who learn lessons from history, and those who commit crimes in Syria, of course, you need to understand, he said. – But I think everyone should be priorities. The priorities that we have heard recently from Washington, namely that the IG is the number one priority and you can cope with them without disturbing the regime of Bashar Assad.”

At the same time, during the talks, Putin confirmed his readiness to renew the Memorandum on the prevention of incidents in the skies over Syria, which was suspended after the missile strike on the United States airbase Assad’s forces.

During the meeting, Tillerson and Lavrov discussed Ukraine. So, the parties confirmed the necessity of fulfilling the Minsk agreements, the US administration has demonstrated a willingness to continue contacts with Russia on Ukraine, Lavrov said.

“We have a common position that the Minsk agreement must be implemented, – he said, – We have felt the interest of the current administration to continue bilateral contacts on the subject in order to help find practical ways to implement fully the Minsk agreements”.

The results of the negotiations was praised by the President of the United States Donald trump. According to him, Tillerson has done an excellent job, “to promote the interests of the security of the US and its allies.” Trump also noted that it is necessary to wait results of negotiations, which will appear after some time.

“It would be great if NATO and our country was able to interact with Russia, we currently do not interact,” said trump.

Experts: breakthrough negotiations did not bring any, but the parties have established communication Rex Tillerson and Sergey Lavrov during the meeting in Moscow: Photo: Ministry of foreign Affairs of the Russian Federation

The meeting of Lavrov and Tillerson laid the lines of communication between Russia and the United States. The purpose of the meeting was to agree on the establishment of a working group for the study of controversies and the establishment of lines of communication. About it “Today” said the political analyst on international Affairs Anton kuchukhidze.

“Breakthrough could not be, because the contradiction is very deep. But, at the same time, high in terms of building dialogue between the parties, this meeting has provided,” he said.

The expert notes that the establishment of the working group will explore all issues of the parties approaches the same Syria or in other global issues, then to make common decisions.

“This positive momentum in the sense that the parties do not refuse dialogue. This does not mean that they will be able to agree on a series of many questions. But, still, the first step to cooperation, despite the fact that each of the parties at the moment retains its position,” he said, Contradictions remain. But, at the same time, both sides have an understanding that without the common efforts they will not be able to solve some regional problems, a number of issues on a global level.”

According to political analyst Vladimir Fesenko, the creation of this working group is communication intermediate result – both sides will be in contact in order to avoid a new cause for confrontation. Thus, the fact that the meeting between Lavrov and Tillerson took place, says that the parties to the confrontation are not configured and retain the intention to negotiate, though shifts in their position have not yet seen.

The expert notes that the main theme of the talks was Syria. Thus, in his opinion, could the parties to overcome the crisis due to US air strike on Syria, will be seen later on further action. Russia urged the United States to make a new “sudden movements”, but the question remains, will listen to this trump. At the same time, the West, prior to the meeting, called on Putin to abandon support for Bashar al-Assad, said Fesenko.

“I don’t see any progress or any new agreements during this meeting, he said, was to Assess the outcome of the negotiations we will be in action – how to act, the United States and Russia on Syria in the coming weeks or months.”

“Directly in the last incident (in Syria – Ed.) the parties – disagreement. On Assad they have differences. But the two sides recognized that the need to fight terrorism”, – said Anton Kuchukhidze.

As for Ukraine, the parties declared that their positions remain the same – America is of the opinion that Russia should withdraw its troops from Ukraine, and Russia denies their very existence, sums up Fesenko.

Recall that the events in Syria have led to the cancellation of the visit to Moscow of Minister of foreign Affairs of great Britain, Boris Johnson, is scheduled for April 10.
Then foreign Minister of Britain, said he discussed the situation with U.S. Secretary of state Rex Tillerson. “He, as planned, will visit Moscow and, after the G7 summit will present a clear and coordinated message to the Russian side,” said Johnson.

The British Minister said that London regrets that Russia continues to protect Assad’s regime even after the attack with chemical weapons against innocent civilians.

“We call on Russia to do everything possible to achieve a political solution in Syria and work with the rest of the world community over the fact that the shocking events of last week never happens again,” concluded Johnson.

We will remind, negotiations of high-ranking representatives of the USA and Russia came amid the recent tense situation in Syria. On 7 April the US Navy ships stationed in the Mediterranean sea, struck by Tomahawk missiles at the air base of forces of Syrian President Bashar al-Assad. The operation was carried out by order of the President of Donald trump in response to a chemical attack in the Syrian Idlib, which claimed the lives of at least a hundred people. In Russia the use of America’s missiles, called aggression against a sovereign state in violation of international law under false pretenses. 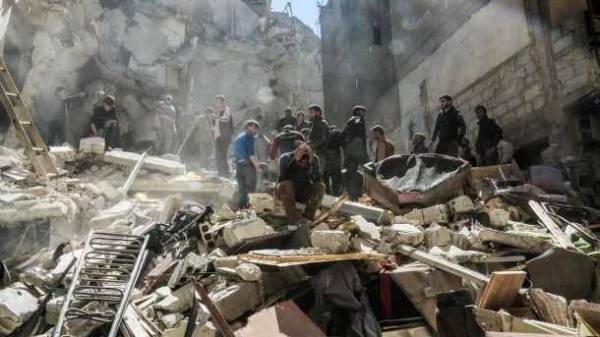 The consequences of a chemical attack in Idlib. Photo: AFP

According to experts, after these events, the already difficult relationship between Russia and America became more acute. As told “Today,” political analyst Volodymyr Fesenko, an indicator of their development was to become the U.S. Secretary of state Rex Tillerson in Russia.

Before meeting with Russian foreign Minister Sergei Lavrov Tillerson said that these negotiations will allow to delineate the positions of Washington and Moscow against each other, and expressed hope that the dialogue will help to promote relations between the two countries.

“This meeting comes at a really important moment for us, when we try to explain each other’s positions and talk about those areas in which our goals and our challenges are shared and our interests are the same, despite the differences in tactical approaches, said Tillerson, Is also will give us the ability to explain and Express those points in which we differ in opinions in order to narrow down these points of differences and in order to clarify the positions and views of each other”.

In turn, Sergei Lavrov said that the visit of U.S. Secretary of state will “openly and honestly to try to clarify the prospects for cooperation on all issues, particularly the formation of a broad anti-terrorist front.”

“Frankly, we had a lot of questions, given the very ambiguous and sometimes contradictory ideas expressed in Washington the entire range of bilateral and multilateral Affairs. I’m not talking about the fact that apart from the statements we recently observed an alarming action when you have taken illegal attack against Syria,” said Lavrov at the meeting with Tillerson.