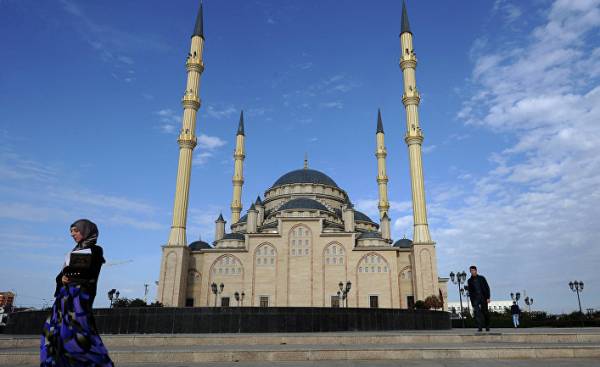 “I’m afraid that he’s one of ours. Can’t find the words to Express their feelings,” wrote to me one of my Chechen acquaintances, after a young man of 17 years was arrested in Oslo with a device that the police security Service has described as “a primitive explosive device of limited damaging effect”.

The young man, who, according to the law on terrorist activities, suspected of illegal handling of explosive material on Monday, was placed for two weeks in a detention cell.

Corporation NRK reported that several people about 17 years old said that several times alerted the police security Service about its concern over extremism in his age group.

The young man was born in the North Caucasus region in southern Russia populated mainly by Muslims.

The region began to feature prominently in the news in the early nineties, when after the collapse of the Soviet Union, the Republic of Chechnya declared its independence.

This was the beginning of a bloody conflict that has engulfed several neighbouring republics, but not in the same manner as in Chechnya. Russia, weakened economic and political chaos, was humiliated in the first Chechen war of 1994-1996.

But in 2000, the Russian government supported the moderate forces in Chechnya, regained control, and since then the Republic is managed by the clan of the Kadyrovs, father and son Ahmad and Ramzan Kadyrov.

From the struggle for self-government terror

At the same time, unrest began to spread to some neighboring republics, primarily Ingushetia and Dagestan. What was first a rebellion for greater autonomy from Moscow, has gradually turned to more radical attempts to establish Islamic rule under strict Sharia law.

This struggle was waged in the form of attacks, which hardly had happen in the world: in particular, was the seizure of hostages in the Dubrovka theater in Moscow in October 2002, and was a brutal attack on a school in Beslan in September 2004.

Gradually, Russian authorities were able to establish control in the area, at least outwardly. Akhmad Kadyrov was killed in a terrorist attack in may 2004, but his son Ramzan soon took power in Chechnya in their hands. He made an Alliance with Russian President Vladimir Putin, which gave him freedom of action in the Republic and allowed to restrict the activities of radical groups.

Huge sums of money from the Treasury of Russia has angered many citizens who believe that the money should be spent on other purposes.

In the neighboring Republic of Ingushetia. in General, did not participate in the Chechen war, the situation in two-thousand years was very difficult — not least because it was impossible to offer them a job and hope for a better future. Radical Islam became for many an alternative, and from it walked a short way to the armed terrorist groups.

Many of the participants in the attack on the school in Beslan were from Ingushetia. The Russian government in 2008 had appointed a former officer of the Russian airborne troops Yunus-Bek Evkurov President of the Republic. After the assassination in the following year he barely survived and managed to stabilize the situation in the Republic, in any case, to a certain extent.

In the Republic of Dagestan with a large and ethnically very diverse population, the situation is very troubled, that came out a few suicide bombers who committed the terrorist acts on the territory of Russia.

It was two women blew themselves up in Moscow metro in January 2010 (the explosions occurred in March — approx. lane), and the terrorists who committed the terrorist attack in Volgograd during Christmas 2013.

Twenty-year-old Magomed Yevloyev, blew themselves up in the Moscow airport of Domodedovo on 24 January 2011 killed 37 people were from Ingushetia.

It was evidence that the radical Islamist group entrenched in a significant space Muslim North Caucasus. This was emphasized by former Chechen field commander Doku Umarov, in 2007 saying that he is now in charge of the Caucasus Emirate — own Muslim government, and claimed responsibility for the blast in Domodedovo.

After the last Chechen war, Norway agreed to accept refugees from Chechnya and gradually became, together with Austria and Belgium, one of the main European countries receiving immigrants.

Until 2004, when restrictions were imposed, the majority of refugees from Chechnya were automatically granted a residence permit. There were small groups of other, mainly Muslim Russian republics of the Caucasus, of the asylum seekers.

Most of them managed to adapt to life in Norway, and many of them gradually upgraded their Russian passports, and now they go back and forth between Norway and Chechnya. When we, the correspondents NRK, visited Chechnya in April 2016, you heard the talk about the fact that many Chechen families have built houses in their villages for the money from Norway.

Neither Norway nor Russia allow dual citizenship, but both countries are apparently condoning the fact that people go back and forth with two passports on hand. It is believed that today in Norway there are between 7 to 10 thousand people from Chechnya and the North Caucasus.

Many Caucasians are going to Syria

Part of young Chechens who grew up in Norway — followers of radical Islam. According to unconfirmed reports, about ten of them went to fight in the ranks of radical groups in Syria.

Abu Edilbaev (23) was killed in Syria, and the Norwegian Chechen 22-years old jailed after returning from Syria, where he fought on the side of the terrorist group “Islamic state” (banned in Russia).

While the Russian authorities are firmly held externally the North Caucasus under control within this region of a smoldering fire. The next day after the attack at the Petersburg Islamic terrorists killed two policemen in Astrakhan, which is located outside of the Caucasus region, but which has a large Muslim population.

The persecution of homosexuals

Rather ironic that President Ramzan Kadyrov is currently introduced in Chechnya, the laws are very close to Sharia, which are Islamic fundamentalists say they are fighting for them. And he firmly opposed those who decided to go to Syria or carry out acts of violence, particularly in the West.

At the same time, the regime in Chechnya is accused of mass violence against his opponents, and in recent weeks there were rumors about the mass arrests of homosexuals that the authorities deny.

“We have no homosexuals as we can to pursue them. If they are, themselves, their relatives sent them from whence they never can return,” said a spokesman for Kadyrov, Alvi Karimov.

But there is ample evidence of the abuses documented in the reports published in the independent “Novaya Gazeta” and reported “Radio Freedom”.

Although President Kadyrov in his attitude towards homosexuals has the support of broad layers of the traditionally very conservative Chechen population, the persecution of homosexuals is evidence of cruelty against all who are not like the others. Such an atmosphere is, unfortunately, a perfect breeding ground for extremist views. At the same time, it is important to emphasize that just as dangerous to generalize the situation.

“Damn it, I have no words,” wrote one of my Chechen friend after it became known that the young man arrested with explosives in Oslo, is a native of the North Caucasus.

And I think that he speaks on behalf of most of all the Chechens in Russia and Norway.