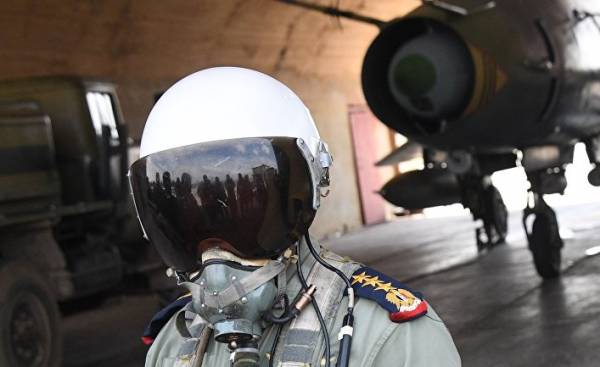 This week Moscow should visit the Secretary of state Rex Tillerson (Rex Tillerson). During his visit, the main topic will be Syria — and the stakes are now very high. If the administration trump and the Kremlin will not be able to converge views on Syria, it can threaten a dangerous collision between two nuclear powers.

On Friday morning, 59 U.S. Tomahawk missiles hit Syrian airbase Shirt. It was a response to the egregious actions of the forces of President Bashar al-Assad, two days before the carried out the chemical attack, which killed dozens of civilians. The missile attacks seemed unexpected step on the part of President trump, who in a similar situation in 2013, urged his predecessor not to attack Syria. Moreover, five days ago, the administration trump made it clear that she was comfortable Asad.

Decisive action trump was warmly endorsed by as many in Washington and America’s allies. However, Moscow is the main protector of Assad — was furious. The Kremlin has called the strike an “act of aggression” and Russian Prime Minister Dmitry Medvedev said that the incident has put the United States “on the brink of military clashes with Russia.” At the same time, the Russian military has closed a hotline that’s designed to avoid incidents between American and Russian forces in Syria, and announced his intention to strengthen the Syrian air defense.

However, no matter how justified and correct from a moral point of view, neither was the use of military force is always a serious matter. Even such limited strikes could push the United States and Russia to the escalation of the situation.

American officials say about the purpose of the shots is too expansive. This is dangerous, as it increases the risk of uncontrolled expansion of the operation. In a statement about the strikes on Syria, trump stated that their goal is “to prevent and deter the proliferation and use of chemical weapons”. Other members of his administration justified strikes the same reasons. However, trump also stressed that his decision was part of a broader initiative “to stop the massacre and bloodshed in Syria.” This implies that in order to end the war in Syria, he may resort to more large-scale military operation. The US representative to the UN, Nikki Haley (Nikki Haley) openly made that clear, saying on Friday: “We are ready for more, but I hope that this is not required. All civilized countries it is time to stop what is happening in Syria horror and demand a political settlement”.

The more widespread purpose of the administration in Syria, the more vulnerable will the White house pressure, pushed for escalation. Some regional allies (particularly Turkey), a long time dream to suck the United States into a war with Assad, has called the strikes “insufficient” and now urge the us to act decisively. Hawks of Congress such as Republican Senator from Arizona John McCain (John McCain) and the Republican Senator from Florida Marco Rubio (Marco Rubio), — in turn, urge trump to supply the Syrian opposition forces more arms to create a no-fly zone and to continue the missile attacks that should force Russia and Assad to agree to a political settlement. Meanwhile, the Syrian air force resumed bombing of the North-West of the town Khan shaykhun, who last week mode subjected to chemical attack. Thus, Assad continues to kill civilians as chemical weapons, and without his help, and against this background calls for a more active U.S. actions aimed at overthrowing Assad, will increase.

If the United States followed these appeals, the prospects of a military confrontation with Moscow will become real. Now on key Syrian military bases distributed several thousand Russian soldiers. Moscow also posted in Syria, their air defense system — one of the most advanced in the world and Russian aircraft patrolled Syrian airspace. Accordingly, a wide American campaign, aims to influence Assad with strikes on Syrian air bases and command centres, carries a risk of death of the Russian military. The same applies to the creation of a no-fly zone, which most likely will require to counteract the Russian and Syrian air defenses and can lead to air incidents between Russian and American aircraft. In both cases, the danger to slip into a direct confrontation is compounded by Moscow’s decision to freeze the channel to prevent conflicts between the American and Russian military.

Further complicating the situation is that Russia and the Assad regime is likely to try to prevent American strikes or the creation of a no-fly zone. To do this, they either preorienting its integrated air defense system against U.S. aircraft and coalition countries involved in the fight against “Islamic state” (organization banned in Russia — approx. transl.), or attack occupied opposition territory in Northern Syria, which are the nearly 1,000 U.S. military. This may prevent the campaign against the “Islamic state” just at the moment when the raqqa — the capital of this militant group is under attack from U.S.-backed forces. In addition, under the threat may be, the lives of American soldiers.

However, serious risks of escalation will occur even if the administration trump won’t go on this way and will be limited to the stated narrow purpose — that is, to prevent chemical attacks.

As reported by journalists, before the blows of the Trump options have been proposed retaliatory strikes against Assad’s forces. In particular, it was proposed to inflict “massive attacks” on dozens of Syrian air bases and other military objects to degrade Assad’s ability to use force for the chemical attacks. A similar option, presumably was considered in 2013 by President Barack Obama.

However, the trump, at the insistence of the Minister of defense of Jim Mattis (Jim Mattis) and the national security adviser G. R. McMaster (H. R. McMaster), rejected the idea and made a choice in favor of strikes winged paddles on one base. Apparently, the answer in Washington found, first, proportional, and secondly, much less life-threatening Russian military. Although it is reported in Sirat has been posted about hundreds of Russian troops, the administration warned Moscow that a missile hit the remote from the Russian barracks of the airbase.

In other words, trump’s preferred option of limited strikes because he and his advisers realize how dangerous it would be for the United States to attack a wider number of purposes.

This creates a key dilemma, which turned out to trump. Deterrence to be successful, there must be a significant threat of new strikes on Assad’s forces, in case if the regime continues to use chemical weapons or commit other crimes. However, if trump is on the move rejects the idea of a large-scale military intervention because of the associated threats, it can be difficult to convince Assad that he will be ready to take this step in response to certain actions of the regime.

Accordingly, there is a risk of error in the calculations. The Syrian dictator (perhaps under the influence of Russia or Iran) may again try to trump strength, hoping that the President will be a “paper tiger”. Meanwhile, trump, personal reputation depends on their willingness to be firm, it may be psychologically or politically forced to react harshly, even if it would mean a real threat of a direct military confrontation with Russia.

Before Tillerson on Wednesday will arrive in Moscow, the administration needs to develop a plan that will allow her to avoid this dangerous road. To do this, Trump and his team must precisely define the goals that they set for themselves. If they want solely to prevent another chemical attack or they try to end the Syrian conflict? In the second case, will the administration insist on Assad’s departure or she is ready for other solutions to limit the confrontation and force Damascus to share power, while leaving Assad with a ruler?

On Sunday, administration officials made a number of statement containing all of these options. Haley told CNN that “no political solution is impossible while Assad remains the head of the regime.” However, Tillerson in an interview with the program This Week on ABC noticed that regime change can be dangerous. He also said in the program Face the Nation on CBS that the administration trump will try to stop the civil war in Syria, creating a zone of cease-fire and restoring the political process. He stressed that this process must involve Assad and Russia.

Further increases the uncertainty Tillerson’s statement that the United States will focus on initiatives to stabilize Syria until “eliminated or reduced” the threat from the “Islamic state”.

Whatever that administration, her approach will need to combine a significant military component with steps to reduce the risks (in particular, it should find a way to restore the channels of communication between American and Russian military). Military operations of the administration must be complemented by diplomatic strategy, which will be based on the influence gained through military strikes, but will not cross certain boundaries. Since Russia is in Syria’s vital interests, Moscow is unlikely to respond positively to American ultimatums and maximalist demands. If the administration will not give the Kremlin the ability to withdraw from confrontation, saving face, is much more likely that Moscow will conflict, not reconciliation.

When finally subside caused by missile strikes an enthusiastic response, first priority will be to protect American interests in Syria, while avoiding war with Russia. In the end, to be stuck in the Syrian quagmire is already bad enough, but the Third world war is much worse.