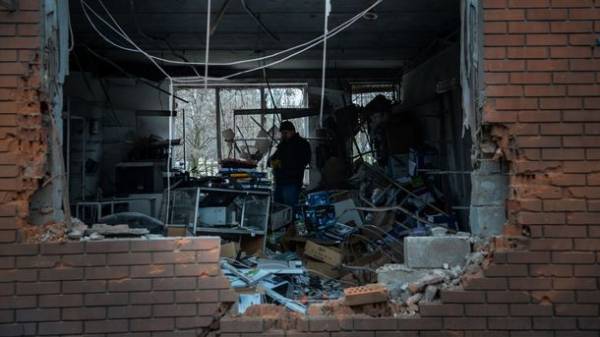 In frontline towns and villages under fire turned hundreds of houses, thousands of Ukrainians have lost their property and were forced to leave their native land. According to estimates of the Ministry of social policy, almost 1.5 million Ukrainians received the status of internally displaced persons. Every fifth family of migrants said that their houses damaged or destroyed, according to the Office of the UN high Commissioner for refugees. The website “Today” found out how much Ukraine can do the restoration of Donbass and where to get the money.

For the restoration of Donbass need another budget

– 27 Jan 2015 bomb destroyed my apartment on the fifth floor, – says a resident of Svetlodarsk Tatiana – when I heard that the house on my street it was a direct hit, I rushed home. Your door found on the street – they issued a blast. From the apartment almost nothing left. 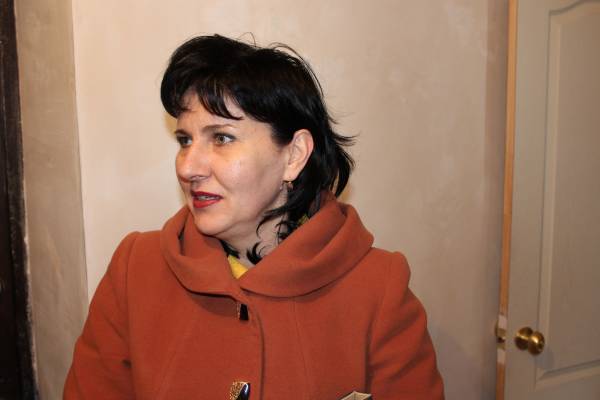 Tatiana talks about how the bomb destroyed her apartment. Photo: “Today”

Bomb destroyed part of the roof, wall with a neighboring apartment and the water system of the house. The local Executive Committee, says Tatiana, has allocated 630 thousand hryvnia for the restoration of property. For the money, dismantled the structure and built walls. 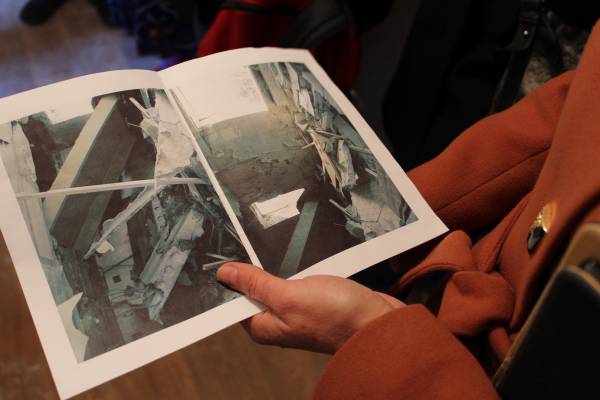 – Had to start from scratch. When I repaired the flat, there was a blank wall without interior finish. It’s hard to calculate how much it would cost to repair. Had to start everything from the beginning. The Executive Committee advised to contact the international Committee of the red cross (ICRC), they paid for the repair, – the woman tells.

In the frontal Marinka war left a mark in almost every house. Of the 57 apartment buildings damaged 53, says the Chairman of the local civil and military administration Vladimir Shekhirev. Some flats cannot be recovered. 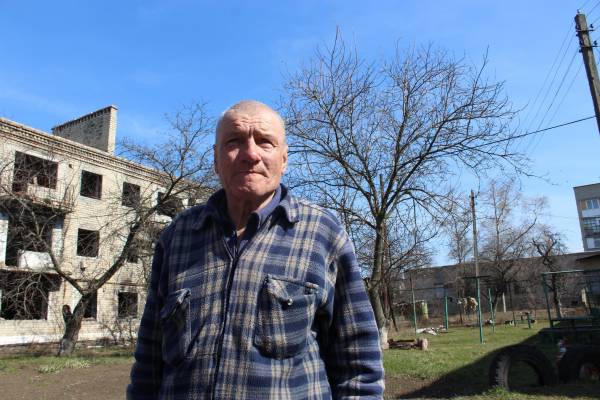 Nearby the man’s house destroyed by a shell. Photo: “Today”

Is in 2014 have. My grandmother yells: “Save!”, sho I save? Look, the house next door is burning. Tripataka. Four died immediately, and then another body was found. Our neighbors had been in that burnt-out house almost two years until the body was found, says 75-year-old resident of Maryinka Ivan.

Is in 2014 have. My grandmother yells: “save!”, sho I save? Look, the house next door is burning. Tripataka. Four died immediately, and then another body was found. Our neighbors had been in that burnt-out house almost two years until the body was found, says 75-year-old resident of Maryinka Ivan. 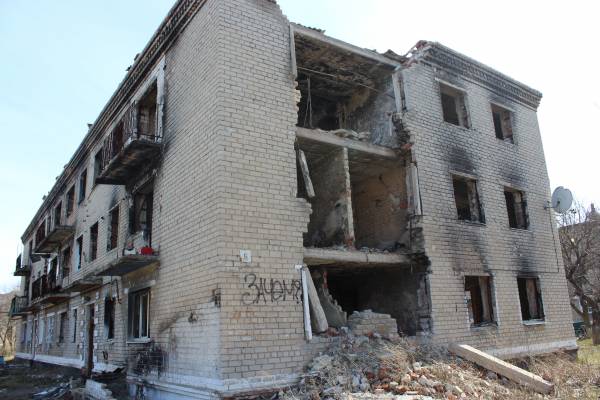 Military action in Ukraine held in densely populated areas. For several years, residential homes, schools and hospitals regularly shelled by the militants. Part of the infrastructure of Donbass destroyed, its recovery will require billions of dollars. “We have seen similar conflicts in other parts of the world, but not in such a densely populated area. The scale of destructions and number of victims has made me a big impression,” – said in an interview with “Today” ex-gossekretar Ministry of foreign Affairs of Switzerland, the ICRC President Peter Maurer.

READ ALSO: How Ukrainians live next to the “DNR”

To estimate the cost of restoration of the Donbass difficult. It is unknown how much of the infrastructure destroyed in the territory of the so-called “republics”. In the controlled part of Donetsk region damaged almost 11 thousand houses, 111 schools, 79 kindergartens and 50 medical institutions, said the head of Donetsk military-civil administration Pavlo zhebrivskyi.

According to officials, the restoration of Donbas infrastructure will need $ 20 billion (about 540 billion hryvnia). This amount is commensurate with the country’s budget for last year. Such money from the state.

– The money we have in the budget. We subsidized region. In Marinka, from 57 homes damaged or destroyed 53 buildings. The head of the 80 – 73 damaged. On the restoration of the Donetsk region has allocated 2.8 billion hryvnia, and then told to spend the money in the frontline – told in Mar military-civilian administration. 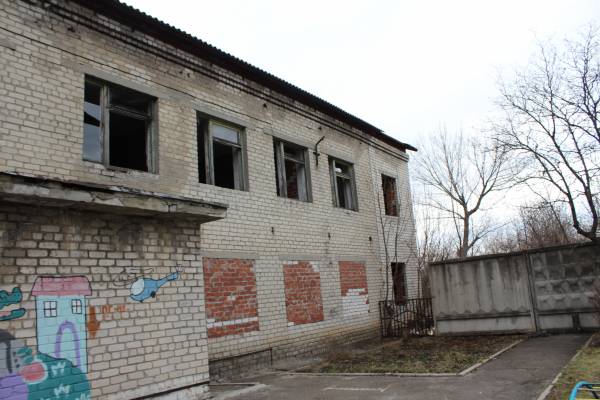 The building of the kindergarten in the frontal Mallorcan. Photo: “Today”

Militants continue to fire at the grey area, despite the announced on the first of April ceasefire. Some objects to restore at the moment impossible – repairmen can’t work under fire, and the results may, at any time to destroy the projectile.

To restore the Donbass only after the cessation of hostilities

Last year for the restoration of Donbass from the state budget allocated almost three billion hryvnia. Money should be enough to repair roads, hospitals and reconstruction of several bridges, including near Lisichansk. About the repair of residential properties at the moment are not talking.

President Petro Poroshenko has created a special Fund for the restoration of Donbass. At the expense of budget funds, the Fund will add about ten billion hryvnias. Another 50 billion will give international partners, including the group of seven countries and the UN. However, the full Fund becomes operational only after the restoration of control in the territories of the so-called “republics”. “We do, but there must be peace, restoration of the Ukrainian flag, Ukrainian sovereignty”, — quotes Poroshenko Agency “Interfax”. 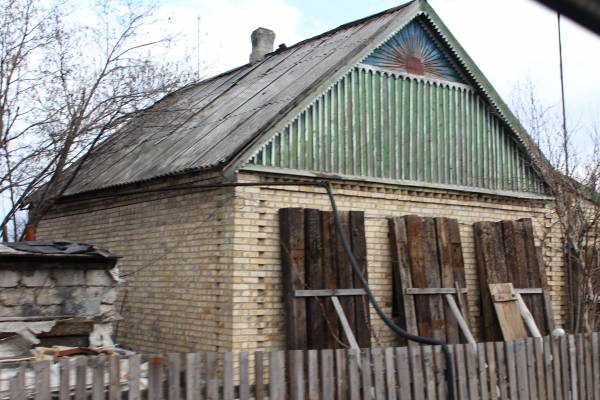 House in the Mallorcan. Photo: “Today”

In some cities in the war zone, including Marinka, buildings are repaired only at the expense of international organizations and other States. For example, as stated by the Ambassador of Japan in Ukraine Shigeki Sumi, the year Japan allocated for the restoration of the Donbass $ 15 million (405 million). The ICRC this year plans to spend for the repair of damaged objects and humanitarian assistance to the victims of the war, the Ukrainians $ 60 million (1.6 billion USD).

– But in order to rebuild the infrastructure, we need to understand that in this area there will be military action. Of course, should come serious investors, for example, the World Bank. We are unable to replace them. But we are ready to meet the needs of the people until, until the opportunity for investors, – said Mr Maurer.

– Of course, should come serious investors, for example, the World Bank. We are unable to replace them. But we are ready to meet the needs of the people until, until the opportunity for investors, – said Mr Maurer.

According to the law “On special order of local government in certain districts of Donetsk and Lugansk regions” of the country’s budget will annually allocate funds for the rehabilitation of infrastructure, industry and housing Donbass.
“The law on the State budget of Ukraine shall annually allocate the cost of the state support socially-economic development of certain regions of Donetsk and Lugansk regions. Ukraine guarantees that such costs will become guaranteed and will not be changed by reducing the approved budget expenditures”, – stated in the document, adoption of which was envisaged by the Minsk agreements.

However, according to Poroshenko, the law will come into force only after the withdrawal of Russian troops and regain control over the Ukrainian-Russian border.

– To enter into force it is only after fulfilling a number of preconditions. These include the disarmament of militants and the withdrawal of Russian troops and the restoration of control over our entire line of the Ukrainian-Russian border, and the holding of fair, free and democratic local elections. Isn’t that what we aspire to, the President said during his video message after the adoption of the law.

We will note, according to the UN during the conflict in Eastern Ukraine has killed over two thousand civilians and eight thousand of the Ukrainian military. More than 22 thousand people received injuries and disabilities.