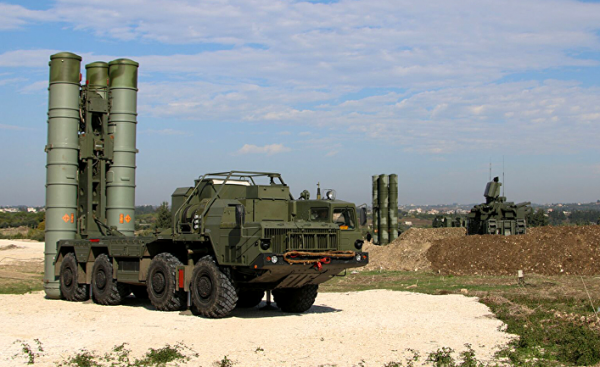 The United States launched nearly 50 Tomahawk missiles on the Syrian shayrat airfield in HOMS with the aim of destroying their existing aircraft. These missiles flying in the zone missile range Russian air defense systems s-300 and s-400, installed by Russia in Syria, and famous for its ability to destroy everything that flies in the sky.

However, missiles “Tomahawk”, which was under the scope of these systems, downed not been. Thus, the Syrian regime has lost one of the most important locations of its air forces and antiaircraft defense of the country as a whole was helpless before the American attacks, not responding to them, especially when you consider that its available air defense systems were deployed in the Soviet era.

In other words, these systems do not work, and so this situation can happen again in subsequent American strikes. The most important thing here is that all the weapons that will be used for the destruction of airports and aircraft (missiles and bombs) can be run outside of the affected area of Syrian air defense systems, and as a result, the subsequent American air operations will be a success with virtually no loss.

A US strike on Syria devalued all the propaganda efforts of Russia and undermined the reputation of its air defense systems, regardless of whether they are used or not used to protect the regime.

Russia has deployed in Syria’s anti-aircraft batteries, which are under the control of its troops in Hamima and Tartus, and in response, America sent their planes (F18) that threatens to destroy the Syrian radar and air defense systems at the Turkish base of Incirlik. In this regard, we can conclude that Russia will suspend the work of these panels, if the U.S. is serious about bombing the Assad regime and shocks “for educational purposes” will move to the more powerful attacks that undermine the very foundations of the regime, as Russia prefer not to put them into action, rather than to lead and a few minutes from the beginning of the bombing to find that her reputation is forever destroyed.

Maybe with Putin in Syria will happen the same what happened in the Bekaa valley in the summer of 1982, when Israel, during an air attack destroyed 18 Syrian batteries of the air defense system, and they constituted the basis of the entire air defense system in this region (in 1982 the IDF launched operation “mole cricket 19”, destroying 11 of the air defense in Lebanon in response to shelling by Syrian forces of a number of Israeli cities from Lebanon from the Soviet guns — approx. ed.). Over the past 33 years, the picture has not changed much, except for some technical details that have emerged thanks to the support of Putin, who sent to Syria for propaganda purposes its military. And now they are forced to make a choice — to ignore the enemy or to suffer from his defeat.

Over the past ten years the Syrian air defense system failed to repel attacks on individual sites, ranging from al-Kubra in the East, including many Israeli attack to the West of Damascus and Latakia, and HOMS province.

The air defense system of Syria is not able to repel the attacks, the immediate purpose of which is not herself, and this once again confirms that she will not be able to withstand more large-scale attacks on the infrastructure of the country. As a consequence, to achieve the collapse of the regime will be possible in just a few hours or days, if, for example, blows are applied to command posts and air defense system (orders will not be executed, and therefore, the regime will be easy to beat).

As the Assad regime might respond to Western strikes?

Air force. In the six years of the Syrian conflict had destroyed much of the aircraft of Assad, but still safely the best aircraft, used only on a small scale. It is assumed that their main aim will be to intercept the attacking planes (if they are able to respond to the kick). This is the MiG-29 and MiG-23MLD. Despite the fact that it is the best aircraft that have mode, they are unlikely to significantly affect the outcome in connection with their small amount and technical differences from modern Western aircraft (you should not expect any particular participation of Russian aircraft in combat).

As for the other planes that are still in the service of the army, such as the MiG-21, MiG-23 and the “Dry-22”, are condemned because they are generally not designed for such operations.

Regarding the means of air defense I must say that they are as helpless and not be able to repel the attack at any stage.

Ballistic missiles. Ballistic missiles may be the only military response available to the Syrian regime and which can ensure its survival. So, it is possible to launch a number of missiles “Scud” and “Fatih 110” in the direction of Saudi Arabia, Jordan and Turkey, but after a short period of time and he will be suspended in case of destruction of rocket launchers and the final collapse of the regime.