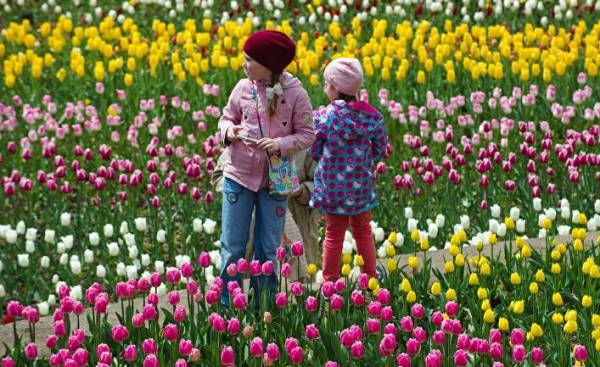 A biographer of Vladimir Putin and his entourage Mikhail Zygar wrote in her book “the Kremlin’s men”, that during negotiations with Petro Poroshenko, the Russian President advised that to fill in the Donbass in blood and money. Just as Putin has done in Chechnya. And then Donbass will love him. These words were saturated with cynicism, because the trigger in this conflict pushed Moscow and Kiev not enough money that could change, however, they provide insight into the strategy of the Kremlin not only in Chechnya but also in the Crimea. The Peninsula needs to feel how it is beneficial to be a part of Russia, and forget about their Ukrainian citizenship, which stems from international legislation.

Paul hard, who works at sanctioned Russian national commercial Bank, loves romance and Greek mythology. He lives in Moscow and may believe not all jingoistic statements, but is proud of what happened in Crimea in spring 2014. At work he deals with mitigating the effects of sanctions imposed against Russia after the annexation of the Peninsula. “I fly to Simferopol, collect a lot of bonus points for flights. I see changes taking place with your own eyes: refurbished center of Simferopol, the tube, which suggests that the construction of new roads,” he says.

Federal funds in the Peninsula poured hundreds of millions of dollars. Part of this money settles in pockets of officials, corruption scandals are brewing, soon will reveal trash and imperfections, as it was in Sochi for the 2014 Olympics. This allows for the Kremlin, importantly, to be effects. No matter how many roskredit, people need to see that Putin not only seized the territory, but also knows how to manage it. As has told in conversation with us ally of opposition leader Alexei Navalny Pavel Puchkov, a military mobilization will not last forever. Sitting watching TV Russian was easy to enthrall the success of the annexation, but this effect can speed.

Refrigerator magnets with a picture of a sad Obama saying, “Crimea was handed over”, and fun of Putin meeting “took Crimea,” will be enough. Not enough to be obtrusive propaganda and hundreds of posters (it seems that in Crimea there are more than commercial advertising) with portraits of the President and new promises. “Crimea has always been famous as the all-Union health resort. Of course, we will continue to develop,” — says one of them. “All social programs in the armed forces of the Russian Federation will be distributed to Sevastopol and the black sea fleet,” promises another. “The bridge across the Kerch Strait will be built by the end of 2018,” reports the third.

As long as people believe in it. Investments provide employment. The army signed a well-paying contracts with those who want to serve. Pensioners receive pensions that are brought to the level of Russian. Small and medium enterprises that are owned by loyal Russian citizens, begin to develop. Hope that everything is going in the right direction. Best of all, such sentiments shows the situation in the bus that we were riding from Yalta. At the entrance to the bus station of Simferopol, the car literally starts to dance, with difficulty maintaining balance to the deep ruts. View jumping to the ceiling passengers causing General merriment. In the end, one elderly woman says: “it’s probably too soon to invest, yet the station”.

Few hopes in the Crimea on the invisible hand of the market. There is, rather, expect will be some “they” will cement the entire area will pay and leave in peace. But nothing is for nothing. Putin promised low stabilization, but simultaneously demanded to withdraw from civic engagement. He undertook to conduct the operation “Sochi-2”, and together with money and concrete sent to the Crimea security officers whose job it is to follow those who are dissatisfied with the new order, primarily Crimean Tatars and longing for the Ukraine minority.

In addition, he began a policy of colonization, moved to the Peninsula the whole military family. We visited the new district of Sevastopol: decent looking house, greens, good cars at the entrance. The KGB and the army is a sort of middle class, which the authorities guarantees support. So they were comfortable, they practically live at work. The area near the Cossack Bay built in the shape of a triangle, the sides of which are contiguous with part of the marine corps, a tank polygon and the polygon of the black sea fleet.

For Kiev, the situation looks dangerous. If Putin keeps his word and will give the Crimeans a “social minimum in exchange for freedom,” the balance will tilt towards Russia. If people receive a small stabilization, they do not want to return to the Ukraine. Then to get in the polls needed result, will not need to resort to any political technologies. A famous Russian intellectual from Simferopol Andrey Malgin explained to us that the Ukraine is a weak state, free market associated with anarchy and absolute power of the oligarchs. From this point of view, Russia, which offers (this is our word), omnipresent totalitarian state, is seen as a deliverance. That burden can be very heavy.

The Kremlin can take into account a scenario in which in a few years Crimea will be one of the elements of a Grand bargain between Washington and Moscow. Russia does not conceal that it expects to conclude with the administration of the trump contract, which will be considered and Syria, and Libya, and Ukraine, and North Korea, and Western troops on the Eastern flank of NATO, and many other controversies. Such a perspective does not sleep the leaders of many countries in our region, including Poland.

As a gesture of goodwill, Putin can offer more time to hold the Crimean referendum. This time lawfully, without fraud 2014, under the supervision of the UN and the OSCE. Such a scenario would be for Kiev Shah and Mat. If Ukraine agrees to a referendum, it loses, and if not, tired of the desperate situation the West decides that she does not want a peaceful settlement, and to negotiate with the Kremlin without her. Every kilometre of new asphalt on the Crimean roads works on Russia, and every day the Russian authorities separates the Peninsula from Ukraine.