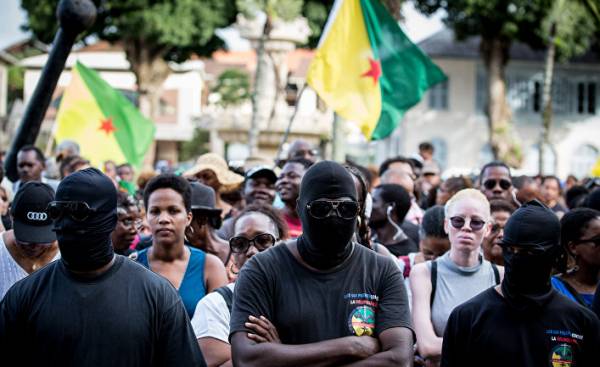 On Monday in Guyana continued the General strike, which was suspended during the weekend. Union organizers promise to completely block this overseas territory of France, blocking roads, ports and access to state institutions.

For the past three weeks life in French Guiana was stopped due to the General strike. Residents of the overseas territories are outraged by the deplorable state of the local economy, infrastructure, health and education, high unemployment and crime.

Team strikers called “For the restoration of Guiana” has blocked all highways and approaches to state institutions. On Tuesday, April 4, striking at some o’clock blocked space centre, Kourou. And last Friday, during the mass demonstrations in the administrative center of Guiana Cayenne was seriously wounded policeman. The organizers of the protest promised to remove the barricades on the weekend, but Monday, they announced their intention to block all roads, even for pedestrians.

“Today, we decided to move to more decisive action. The state is not fulfilling its promises, the government shows its contempt for the inhabitants of Guiana, so we have to keep fighting to strengthen it, collecting as many strikers that would compel the state to fulfil its obligations”, — said one of the strikers, Olivier Gude.

However, later, as reported by the special correspondent of RFI in Cayenne, pedestrians are still allowed to move, and in some places allow the use of bicycles and motorcycles. Three weeks of strikes in the major port city of Cayenne in French Guiana, where it is delivered 90% of all goods became irregular with food supply. “I call friends and they say that they have no more gas. Nothing — I say im going to cook on the fire!” — do not give up one of the participants of the strike.

In Paris, the Central authorities urged the population to remain calm and has announced the shipment to Guiana government missions for negotiations. The government has promised to find € 1 billion for the economic recovery Guiana, however, the organizers believe that it is necessary to allocate at least twice.

State aid is inadequate, says the President of the regional Council of French Guiana from a coalition of leftist parties Rodolphe Alexander:

“Care is inadequate to the scale of the Guiana reality, we have only one region of France, where population growth, the fertility index is up 4.5 per year, and that’s just on the coast. If you go to the border regions of Surinam or Brazil, it is still more than 8%. This means that demographic growth is forcing us to catch up the backlog in education, training, gosuchrezhdenijj. We have more than 25% of young people are unemployed. The challenge before us is to build by 2020, five high schools and six colleges. This means that we have a large gap in terms of output areas of isolation. In remote areas there are a number of settlements that are in the enclave, you can only access it on the cake. All this is our reality today. So one billion sounds very interesting, but completely insufficient. Especially if you remember about the condition of hospitals and the quality of service there, as nurseries, services for the protection of motherhood — all in terrible condition”.

French President Francois Hollande on Monday urged residents Guiana to end the strike and was invited to the elysée Palace a delegation of deputies from this overseas site for “friendly chat”. The deputies could come “at any moment”, said in a written appeal of the President, where it is also noted that the economy of French Guiana “can no longer suffer” from a prolonged strike. “Children must go to school, businesses need to operate, workers need a salary,” insisted Francois Hollande.

However, this protest is quite a long story, and it is related to unfulfilled promises of Francois Hollande — says the President of the regional Council of French Guiana, Rodolphe Alexander:

“You have to understand where it all began. You know that President Hollande arrived in Guiana in December 2013. After a long discussion with the local politicians and at our request, he announced the introduction of a “Marshall Plan” for Guiana. This plan was called the “Pact of the future”. By the time it approximately coincided with the case of the “Red caps” in Brittany. So, is the government prepared the project funding and description. We have received these documents after the local elections held in December 2015. We were not allocated any compensation Fund or Fund capital investment. The report of regional audit chamber and the other prepared by the expert of the Ministry of Finance, both show that subsidies from the state budget, in particular municipalities, do not take into account the unique circumstances of Guiana”.

Therefore, it is unlikely that the President calls for help to stop the protest. But can do it the locals who are already sick to walk and suffer from shortages of food. In the last days in Guyana is gaining momentum, the petition demanding the removal of barricades from the roads. It was signed for about 2 million people.