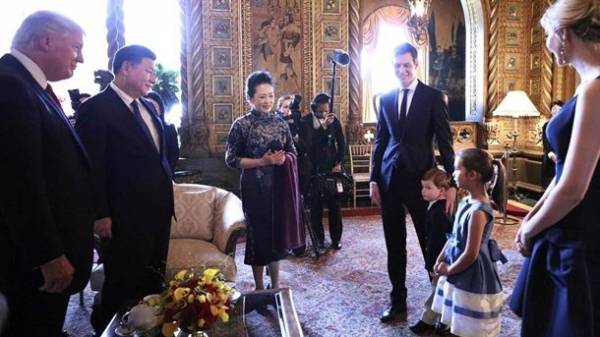 The fact that the granddaughter of the American leader speaks Chinese, some take it as a sign of the hidden sympathy of the Trumps to China, reports Корреспондент.net.

Ivanka trump has posted on Twitter the video, which her daughter Arabella singing a song to the leader of China XI Jinping and his wife in Chinese.

The video was filmed in the estate of trump’s Mar-a-Lago during the official visit of XI Jinping in the United States.

The fact that the granddaughter of the American President speaks in Chinese, some take it as a sign of the hidden sympathy of the Trumps to China, writes CNN.

Very proud of Arabella and Joseph for their performance in honor of President Xi Jinping and Madame Peng Liyuan”s official visit to the US! pic.twitter.com/fu3RIh26UO

We will remind, the President of the United States Donald trump and Chinese President XI Jinping met on 6-7 April in the U.S. state of Florida. The leaders discussed the nuclear program of North Korea, trade policy and regional issues.

As reported Корреспондент.net at the end of the meeting with trump XI Jinping said that China and the US should strengthen cooperation in the military sphere.