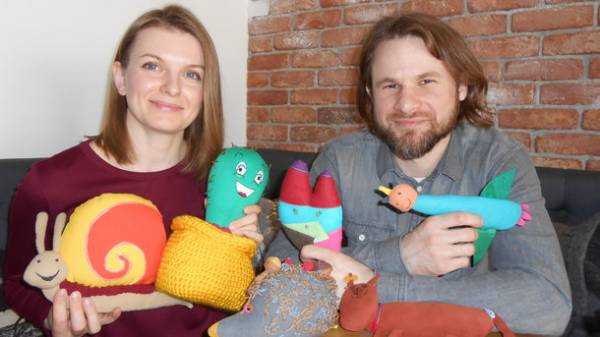 Childhood is the time when every day is open, and the brain, not uptight “adult” norms, constantly comes up with exciting worlds. These unique worlds of fantasy child throws in his drawings. These images often live for a long time: the canvas may tear in the course of the game or eventually will be unnecessary grown-up owner. But each figure has its own soul, and the images inspired by fairy tales parents and his favorite cartoons. So why not “revive” these drawings into a toy or a pillow? It is so child will be able to hug a favorite drawn character and conduct with him a lot longer than the fragile piece of paper. So thought the capital’s advertisers Irina Pigal and Mr Zhuravkin and founded a creative laboratory “Katapatan” to create exclusive toys on children’s drawings. How baby pictures have life — in our category “Special case”.

ZHILI-BYLI. The founders of “Katapola” — a little over 30. Vladimir is originally from the city of Kupyansk in Kharkiv region Irina — from New Kakhovka, Kherson region. He received an engineering degree, she chose the profession of translator. And this script was originally provided young people with modest chances to meet. But life took a turn: he and Irina moved to Kiev, decided to build a career in advertising several years ago I met at a theme party. The young people quickly found a common language and created the Agency, where they filmed the ads, clips, movie. But the working interests of Vladimir and Irina do not like to be limited, because the creative work teaches us to look for new ideas even in the home. And so was born the project “Katapatan”. “In the kitchen there was a fridge. Here sister hung pictures niece. And when he was away, he suddenly realized that the baby pictures are cute, but not forever. So why not create a real toy for these pictures? Presented itself to the children who would have received such gifts. Then felt the gentleness of a surprise, because in childhood the toy can be the most beloved, and only as an adult one realizes the deep significance of the gift,” — says Vladimir. No matter what the drawing is — unimaginable creature with horns and tail, blue giraffe spotted or purple fish with wings. “It turns out the most unusual toys in the world, but not a serial monster from the movie. And when parents give a child a toy, made in the image of his drawings, I can safely say: this friend now there’s only you and no one else in the world. The child will be happy,” — says Irina.

INSIDE out. On the development of the project, the guys left the year. The most difficult orgvoprosov turned out to be a search competent masters handmadebe that on children’s sketches were made exact copies of the toys, because the products it is important to repeat all the curves, bumps, colors and decorations. “Often adults the wizard tried to improve the krivost of the picture or offer to do the same initially, different ears. Had to remind me to keep an accurate idea of the picture. And so, by means of tests, finally managed to find craftsmen who understand the essence of children’s fantasies,” explains Irina. Rebuffed the first toy was a green dragon back in the fall of 2014. In this same company was a hedgehog, a strange-looking cactus, jumping snail and other “gibberish”. “The starting capital amounted to UAH 1,000, and this money went to sewing toys, which became presentation samples. The rest helped friends. It was a relief, so to speak, for coffee”, — says Vladimir.

Now sew master toy manually at home. Creating exceptional work requires careful selection of parts for sewing products for children: special attention is given to hypoallergenic, texture, durability of colors. “Fabrics should be natural — although, sometimes, parents are asked to sew a toy from suede or faux fur, with small beads or knitted items. And the filler is most often used synthetic. All the materials hold their shape well toys, do not cause allergies, and the product can be washed,” explains Vladimir.

Now toys and pillows to sew, and I ask the people of Ukraine, and abroad — the Czech Republic, Austria, Poland, Switzerland, Sweden, USA. “We have artists of all ages. The youngest is 9 months. Then the figure struck by the combination of colors and neat prints of the palms. Became an attractive figure. But there are adult clients 30-35 years. One girl ordered a gift for the guy who draws in a notebook comics. Sewed him a pillow,” says Irina. In General, the production of a toy or a pillow takes about two weeks, depending on the details, complexity, material selection and priority of orders. Gifts are acceptable: toy height up to 30 cm — from 400 UAH and the pillows 30×30 cm — 450 UAH.

When my mother became a toy

Often children are asked to make toys or pillows with the image of parents, Vladimir and Irina. One such story is the founders of “Cocopotamus” is particularly memorable. “An order came from the Czech Republic. Figure Nikita, a boy of 5 years, depicted his pregnant at the time, mom. She was just waiting for second son. The child drew a man, belly, inside another man. And strange red zagagulina on the face. In children’s drawings are often inaccurate, but we made a toy with all the nuances, was sent to the Czech Republic. After some time the mother asked the son: what’s that red dot? The child replied: it’s a Lollipop. They say that the mother eats the sweet that goes into her tummy to her brother. And so Nikita decided to treat the brother”, — says Irina. The story did not end there: when the light appeared younger Ilya, he became interested in the toy brother. In the end, Nikita drew another mother for Elijah. And “cocopotamus” made another toy for the brothers.