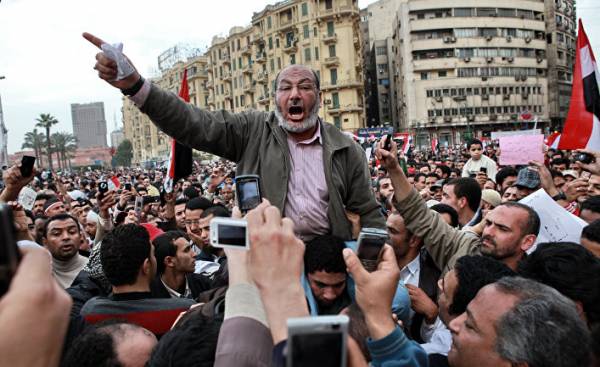 The “Arab spring” blew up the middle East and North Africa, putting to the brink of destruction many Arab countries. If the beginning vosstanii was associated with the aspirations of the people, its aspirations for freedom, justice and dignity, in the end everything turned in another direction, thanks to the efforts of various political forces. They led the revolution, intervening in the Affairs on the regional and international levels, in parallel trying to strike that served their interests. In some Arab countries, the conflict turned into a struggle for power and influence, and departed from the spirit of the peaceful popular uprisings.

After that, Arab society has passed the stage of struggle for the essence of their countries. The modern state since the post-colonial stage, is a new phenomenon, and for many forces in the Arab world it was unacceptable.

This led to the struggle for the establishment of state institutions in the middle East. However, what we want to see it? Whether it is religious or secular? What form of government is preferable: a Kingdom, a Republic, or the Jamahiriya? We in the Arab world has not reached the state when the project state can be carried out in accordance with modern concepts. Most Arab countries do not solve important questions, ignoring them. Among these similar points of democracy, pluralism, human rights, the relationship between religion and the state, issues related to social justice and development. It is the lack of attention to these issues led to a series of uprisings that we have witnessed.

When did the uprising of the Arab spring, turned a bloody struggle for power between different forces. It was followed by the collapse of financial losses, the loss of many lives and the emergence of a million homeless by the wars.

In countries dominated by authoritarianism, peaceful transformation did not happen in contrast to modes with a high degree of legitimacy and which was formed in a coup. For the latter, the process of change was slow and peaceful, such as in Jordan or Morocco, where the leaders of both countries had shown great flexibility in the interaction with people’s movements.

Few Arab research centers should investigate the reasons for the revolutions of the Arab spring has failed to implement the necessary changes. This improvement of political, economic and social conditions of life of the citizens of Arab countries. You need to understand what are the lessons to be learned from the experience that Arab countries received as a result of the failure of the “Arab spring”, so that no such uprising was not the same useless.

In my opinion, the reasons for the failure of the Arab revolutions, initially aimed at the improvement of Arab society, lies in the fact that they are unable to change the culture and thinking style of Arab citizens, and focused only on the use of violence, which, even if it was justified, was not accompanied by intellectual changes. Arab thought remained petrified, and Arab culture is weak, marred by backwardness and inherent distortion of concepts. The weakest point here is the participation of society in the changes that we need to hold in your consciousness and in the political, economic and social reality of Arab countries.

Among the negative consequences of the Arab spring, it is worth noting the numerous crises that have destroyed the institutions and infrastructure of five Arab countries, claimed the lives of people not having any rights, has aggravated social contradictions, pulling to the surface ideological differences. Millions of people were forced to leave their homes, causing a brain drain in the Arab countries. Economic losses have reached amounts in excess of a trillion dollars.

Sincere attempts of reform and change in the Arab countries ended up frustrated, and this effect will last for decades. Most of the Arab citizens, already mourning the days past, wishing that things had remained in place and unchanged.

Political, economic and social reforms in Arab countries have become in demand, you need to constantly talk about their importance. Moreover, these reforms must be accompanied by intellectual and cultural progress, as this is the basis for future sustainable success.