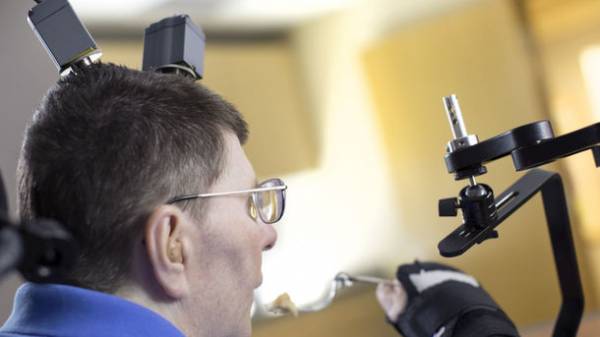 A paralyzed man for the first time in eight years was able to eat after doctors implanted in his brain a new microchip – writes “Popular Mechanics”.

Bill Kochevar was paralyzed below the shoulders after a Bicycle accident in Cleveland in 2006. To help him regain control of his body, in 2014, doctors surgically placed in his brain two tiny implant to allow brain to send signals to your hands. They are transmitted by external cables connected to the computer, which sends commands to the electrodes implanted in the muscles of the arms and hands.

Even after the first experience of practical testing bill was able to drink coffee through a straw and to taste the mashed potatoes and macaroni with a fork. After so many years of paralysis, the muscles have partially atrophied, but because the doctors had to help Kochevar and with this: it went robotechnology. A study of the history of bill published in the journal Lancet.

“We know that paralyzed people damaged spinal cord, but because the signals from the brain cannot reach the muscle, but because our system was aimed primarily at overcoming this disease,” says Bob Kirsch of Case Western Reserve in Cleveland, senior author of the study. Similar technology was previously used in order to help some paralyzed people to perform simple mechanical operations: to keep your toothbrush, move your feet, drink from the bottle, etc., but brain and muscle implants to this day has not left the limits of experimental laboratories.

Kirsch hopes that over the next few years this practice will gradually be introduced in medical institutions, but it will need some significant upgrades that will cost tens of thousands of dollars — not too big (for the market), but still a substantial amount.

Chad Bouton from the Institute for medical studies. Of Feinstein in Manhasset, new York, who worked on similar projects but was not involved in this test, says that new technology could be useful outside the sphere of the healing of paralysis, for example, for recovery after a stroke. Other experts insist that we need to improve and expand the scope of brain implants. Basically, scientists are focusing their efforts around how to convert the electric signals into nerve impulses: currently, people with such devices move very abruptly and clumsily.