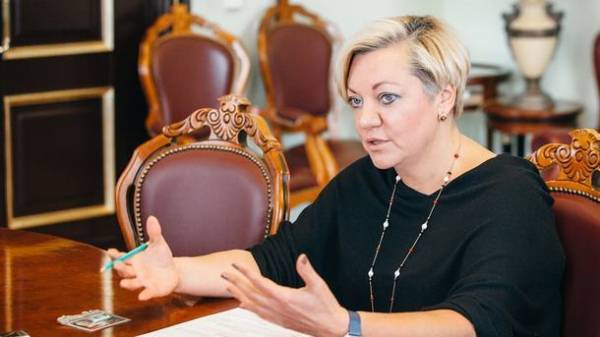 Rumors about the possible resignation of Valeria Gontareva as head of the National Bank of Ukraine again gaining strength. Despite the fact that the NBU refute this information, the experts note that this is indeed possible, but the final decision on this matter rests with the President Petro Poroshenko.

Originally Valeria Gontareva was appointed to the post of head of the NBU temporarily, told the “Today” Volodymyr Fesenko. Now, when the minimum obligation assigned to it by the President made, she spoke about the possibility to leave, he said. So, in a recent interview with “UKRINFORM” Gontareva said that the position of head of the NBU fulfilled its mission.

“I never said that I will work with the Central Bank life. I believe that his mission is completely fulfilled. First, the country moved to a flexible exchange rate and the beginning of the new monetary policy of inflation targeting. Secondly, we have cleared the banking system from insolvent banks and strengthen its sustainability for the future. And we did a complete transformation of the National Bank into a powerful modern institution, rebuilding all processes”, – said Gontareva.

Another factor that may play in favor of her departure, Fesenko considers psychological fatigue, especially in large shaft criticism and blame for the situation in the banking sector. However, as stated by the political analyst Taras Berezovets, a desire Gontareva to leave the post of head of the NBU can be regarded as an attempt to avoid responsibility for this difficult situation.

Moreover, because of dissatisfaction with the corporate and banking sector the current situation, the issue of resignation Gontareva were hearing for a long time, says ex-Deputy head of the NBU Serhiy Yaremenko.

As noted by Taras Berezovets, now very convenient time to replace the head of the NBU, as in April will take place the annual report, which will be raised and the question of financial policy.

In this case, the experts agree that the final decision about change of the Chairman of the NBU will accept the President of Ukraine Petro Poroshenko. However, while the guarantor does not show any signals about its willingness to replace Gontareva, although it has a good selection of specialists who could effectively manage the macroeconomic processes at the level of the national Bank, said Berezovets.

Who can replace Gontareva

As the political scientist Vladimir Fesenko, before Gontareva was delivered a few conditions, the main of which – Ukraine received a tranche from the IMF.

Read also: IMF Loan: when and how will change the lives of Ukrainians

Another factor that allows her to leave his post – the agreed nominee of the successor. The expert suggests that at the moment, official statements about the departure Gontareva from the post of head of the NBU no, because not resolved the question of who will replace her.

“If there is a candidate in the near future, perhaps we’ll find out about it,” – said Fesenko.

As stated hontareva, as his successor, she sees not a policy, and professional in banking. Moreover, she proposed several candidates, but their names remain unknown.

“This position has to work a real professional, banker, technocrat, not a politician. That is my vision, I have proposed several candidates of his successor. But the choice, of course, for the President,” – said Gontareva.

As noted by Sergey Yaremenko, now nobody knows who will replace Gontareva, since this candidate is not chosen from representatives of the banking sector, and on the basis of political motives. Meanwhile, in the information space have already discussed several potential successors to the head of the NBU. According to political analyst Volodymyr Fesenko, among them are the two – Chapter Independent bankers Association of Roman Shpek and Chairman of the Board of JSC “Raiffeisen Bank Aval” Vladimir Lavrenchuk.

“Bacon and Lavrenchuk has a very good reputation. I think either one of these two candidates, or a completely unexpected version“–says Fesenko.

The political scientist Taras Berezovets, in turn, relies on the candidacy of speck. “Speck close to Arseniy Yatsenyuk, has experience in senior positions, so this candidate today has objectively more likely”, – said Berezovets.

However, as I’m sure the ex-Deputy head of the NBU Yaremenko, while these discussions do not mean anything, because the candidacy of the new head of the national Bank will be selected by the President and can be very unpredictable.

Recall from the end of February in Ukraine, discussed the topic of alleged Gontareva adopted the decision to submit his resignation from the post of head of the NBU, which is ready to meet the President.

Monday, April 3, the Deputy head of the faction PPO Irina Lutsenko reported allegedly written by the head of the NBU statement of resignation. Later this information was denied by the NBU, and the head of the BPP in Parliament Artur Gerasimov said that Gontareva remains at the head of the national Bank.