According to the health Ministry, every year in Ukraine more than 110 thousand people are faced with a stroke, about forty thousand die of the disease.

A stroke is a disease associated with the violation of cerebral circulation, resulting in certain parts of the brain is reduced or completely stops blood flow. Ischemic stroke occurs when a blood vessel in the brain is blocked by plaque or a blood clot. And hemorrhagic – if a blood vessel is broken.

To date, the disease is the leading cause of death of the Ukrainians. “Today” figured out how to treatment and prevention of stroke in Kiev.

To do this, we visited the Alexander clinical hospital, one of the oldest medical institutions in the city. The hospital was founded in 1875 in the hills of Pechersk district, between the streets shelkovichny and Mechnikov. It is a budgetary institution and is subject to the Department of health KSCA. Inpatient care is carried out in 24 departments. The Department of neurosurgery is designed for the inpatient treatment of 60 patients. Here around the clock do people with ischemic and hemorrhagic strokes. Emergency treatment is provided at public expense.

In Kiev a day can sometimes be up to 150 strokes

“I thought he just didn’t want to work, faking – lamented lady, about sixty years in the lobby of the Neurosurgical ward in oleksandrivska hospital in the late evening. – Come in the room and he lies on the floor! On the floor, you know? Can’t connect two words! Fingers are almost frozen”.

Her husband had a stroke. He worked a lot, nervous, but, in General, the health and never complained until literally fall over from a stroke. The patient is prepared for surgery, time to speak with the duty doctor. Michael Leshko, PhD and neurosurgeon with 17 years of experience, carefully studying pictures of the patient and tells that this is not a lost cause.

“Now we are going to perform the operation on the skull, Presevo through a small hole in the ventricle of the brain is a special ventricular drainage medical silicone. Operation staff is vitally in order to monitor intracranial pressure and to the reorganization of the CSF. The case is not running, so the bruises will not be deleted. This morning we operated on a much more complex patient with a large hematoma to the frontal lobe. Most likely, the stroke she had developed the night before.She suffered headaches for as long as is actually loaded into a coma. The patient had to call my son, he came and called the ambulance,” says the doctor.

Operation newcomer patient takes approximately 45 minutes. She was successful in front of the family a long path of rehabilitation, but the doctors give positive forecasts.

“Generally, around Kiev can be up to 150 strokes per day. Patients arrive to us around the clock with fresh strokes both ischemic and hemorrhagic. Patients operate immediately, without any delay. To choose the right tactics of treatment, done computed tomography and magnetic resonance imaging, angiography is necessary. Good prognosis when patients bring in so-called therapeutic window of up to two hours from the onset of the disease. Of course, the highest percentage of mortality in severe bleeding with breakthrough ventricular system of the brain. Not only for us, it is a worldwide trend. If the patient is not delivered in a coma, the chances of survival are high. Now on a suspicion of a stroke the ambulance should arrive in 10 to 15 minutes, so at the first sign of symptoms I recommend you not to procrastinate,” advises the doctor. 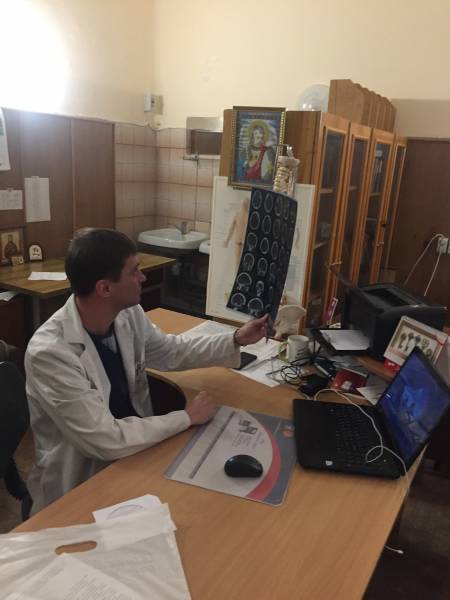 According to the doctor, strokes today, rejuvenated, and very often the disease affects young people after 35 years. The doctor advises to pay attention to severe headaches and pressure surges. Any stroke happens, usually at the races pressure when blood vessels are torn. In ischemic strokes, pulse wave hits and pulls from the plaques and clots. Treatment of stroke in our days is very expensive, but emergency surgery in Alexander are free of charge. Even in the hospital there are some drugs purchased by the state and may be obtained free of charge. For example, in ischemic stroke, the drug that dissolves the clot. One ampoule of this drug costs about five thousand hryvnia, and now he is in the hospital.

According to the doctor, today, in neurosurgery there is no such pathology that cannot be operated on and treated in Ukraine. But because of the comfort people who have money are more likely to seek abroad

“Actually, prevention is not difficult. First and foremost, you need to monitor your blood pressure. Good faith health exams, and not to buy help. And I don’t smoke and do sport, any physical activity – a good prevention of stroke,” advises the doctor.

“Actually, prevention is not difficult. First and foremost, you need to monitor your blood pressure. Good faith health exams, and not to buy help. And I don’t smoke and do sport, any physical activity – a good prevention of stroke,” advises the doctor.

By the way, in 80% of cases the cause of cerebral hemorrhage is hypertension. Simply put, high blood pressure. At risk are primarily high blood pressure – people who have often exceeds the critical pressure of 140/90 mm Hg.St. Increases the likelihood of stroke, diabetes, coronary heart disease, angina and overweight. People who are at risk, you must also adjust your diet, limiting consumption of meats, sausages, pickled vegetables, meat, salt, butter and eggs.

People who are at risk, you must also adjust your diet, limiting consumption of meats, sausages, pickled vegetables, meat, salt, butter and eggs.

The majority of patients with high blood pressure doctors say lack of exercise – too low physical activity. Therefore, for the prevention of disease physical activity 3-5 times a week for 30-60 minutes will be very useful!

Rehabilitation after a stroke in Ukraine is extremely expensive, so it’s easier to avoid disease than to treat it. “When my husband had a stroke, to rehabilitation, we spent 50 thousand hryvnia per month, and the only way he could almost fully recover. Perhaps it can be done cheaper but suitable options to us I have not found. One thing I will say: this is a disease, when the person himself does not belong. Even after almost two years, my husband was not the same. Psychologically very hard, changing the nature of that behavior. He was nervous, he started to have a tantrum on an empty place, the mood could change suddenly! If we knew just how scary that would have done anything to avoid disease,” says Anna from Kiev Skoryk.