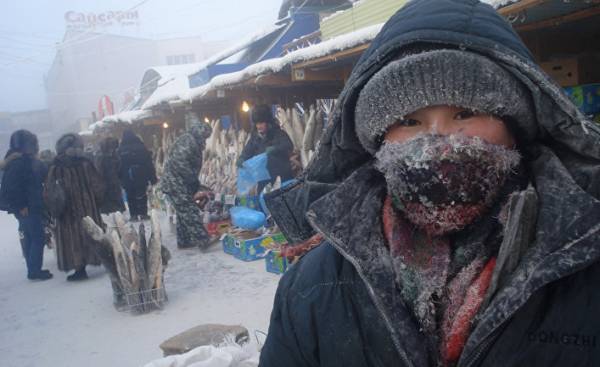 You never know what made you Siberia.

I thought about this when heading to the opposite shore of the Lena river on a spring day. I was invited to Petrovka of dogs on a bear.

I was expecting the cleared area in the middle of the forest. In its center was dozing bear. Then the plot produced a dog that started yapping and threatening to get close to the predator. The two men secured the leash on the bear so that he could not attack the dog.

It’s a competition of hunting dogs, or huskies, in which dogs compete in their courage to approach the bear. Judges sitting in the house close by and commenting on “performance”:

The bear looks tired, not surprisingly. He came out of hibernation a week ago, and now it is the morning yapping dogs. The king of the forest and snarls at the dogs, barking only when it becomes quite unbearable.

Use for pritravki dogs bear, taken from the forest as a cub and raised in captivity, in Finland it is illegal ill-treatment of animals. However, here in the air atmosphere. Dog owners come with their Pets from afar. The main award — collar cost of 1.5 thousand euros with a satellite Navigator.

Spring is a good time to bark at this large predator in April here begins the hunting season for bear.

Spring has awakened from hibernation and fishermen. Now on the ice of the Lena river fishermen engaged in catching carp and roach. Since the ice thickness of two meters, to borax have to weld an additional part.

Traditional fishing in the Yakutia “colour”. In the forest there are closed lakes, which are actually areas of permafrost, which often freeze to the bottom. The only surviving in these lakes fish species, bony, and well-fed carp, which hibernates in the mud at the bottom. Carp took out a large hole through the network, or do they rise to the surface under pressure of water.

A real bonanza for fishing is in the North, and from there bring different types of whitefish. In the squares they sell them with the internals as frozen sticks. Our favorite is the huge and tasty fish white salmon.

In different parts of Siberia, the kitchen was formed with regard to local species of fish. In the Japanese and Okhotsk seas and in the waters of Yakutia there are absolutely different fish. There are many species of salmon, giant crayfish is awfully tasty sea cucumber, which, unfortunately, is under threat of extinction.

We graze and eat cows and horses, in the North — reindeer. The Nenets even drink their raw blood.

The unifying factor in the diet of Siberian — lack of vegetables and fruits. We buy in expensive city Chinese vegetables, but local content with less. Older people remember as a child only once a year get the Apple for the New year.

Summer in the forest, fortunately, grow berries, and chives. In the XIX century the Russians brought to Yakutia agriculture, and now the village has their own potatoes and cabbage. Siberian gum — “sulfur” made of resin, larch, and best of all — chewing on roasted nuts, cedar pine.

A diet that contains a lot of fat and little carbohydrates, have caused the indigenous peoples beriberi, like ketosis, which they did, thanks to genetic modifications. These people fast metabolism, so cholesterol and fat is not increased, and the body converts fat into energy and heat. Now here eat oats, rice and sugar, and this has led to overweight and health problems.

All winter we ate deer meat shot in the nearby woods deer.

The horse meat here, of course, a special position. When participants of the local club grandmothers “Girlfriend” had set the table, the most important delights was frozen raw pieces of meat from the ribs of the foal that the colors resemble the red, the red wrapper of the Finnish Pihlaja candy.

Eat all parts of animals. Classic Yakut cuisine — sausage Haan. From the blood of the foal to receive the serum, which is mixed in the salt and cook until white. Everyday food — minced stomach of the horse and the soup from the innards, in which there is liver, kidney, stomach, diaphragm, heart, lungs and colon. In appearance the soup is like the coral.

The table “Girlfriends”, of course, decorated the jug of koumiss, which is familiar to all peoples speaking languages of the Turkic group. It is believed that the drink made from sour milk helps the horse to cope with, including, and diseases of the lungs. Mare’s milk has become my local favorite drink: he sour and fresh taste. The rest of my family is not particularly inspired.