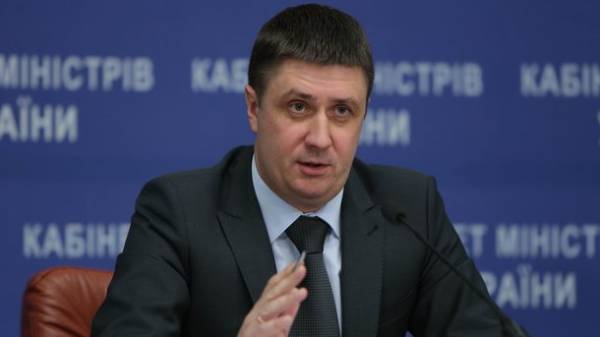 Vice Prime Minister of Ukraine Vyacheslav Kirilenko said that Russia may participate in the Eurovision song contest-2017 in Kiev, if you represent the party that do not violate Ukrainian laws, and to demand from Ukraine to violate its own law is unacceptable. This reports the press service of Deputy Prime Minister.

“I can reiterate that Russia can take part in the Eurovision song contest-2017 in Kiev, but if such party who has not violated the Ukrainian legislation. And, I think, exactly this decision was made by France, Germany, UK, Poland or any other country member of the European broadcasting Union. And to demand from Ukraine an unprecedented decisions in favor of Russia and in violation of its own laws and, by the way, international law is unprecedented and is unacceptable,” – said Kirilenko in the air of “Ukrainian radio”.

He again stressed that Ukraine adheres not only their laws but also international, as the Russian singer Yulia Samoylova violated the Ukrainian law.

Kirilenko said that if Russia will come with another participant for the contest, they, like all other delegations will be provided with security, normal reception and stay. Otherwise, Ukraine will host Eurovision for 42 countries, said Deputy Prime Minister.

We will remind, Russia has chosen to participate in the Eurovision song contest 2017 the singer Yulia Samoylova with the song “the Flame is Burning”. From childhood, she is wheelchair-bound and has a first group of disability.

On 22 March the security Service of Ukraine made the decision on a ban of 3 years of entry into the country Samoilova as illegally visited the occupied Russian Crimea, on the basis of the data on violation of the legislation of Ukraine.

March 23, EBU was invited to participate Samoilova in the Eurovision song contest on a video-link. But the Russian “First channel” rejected the proposal, saying that the organizers should ensure that the performance of the singer in accordance with the regulations.

Later edition of Oikotimes reported the letter to EBU Director General Ingrid Deltenre (Ingrid Deltenre). She allegedly said that if the situation with the participation of representatives from Russia Samoilova in the Eurovision song contest-2017 not addressed, it will jeopardize the continued participation of Ukraine in the contest. In her letter to the Prime Minister of Ukraine Volodymyr Groisman, the text of which is published by Oikotimes (letter dated 23 March and published copy – March 27) is a call to intervene in the situation with the prohibition Samoilova to enter Ukraine and to make possible her visit to Kiev in may.