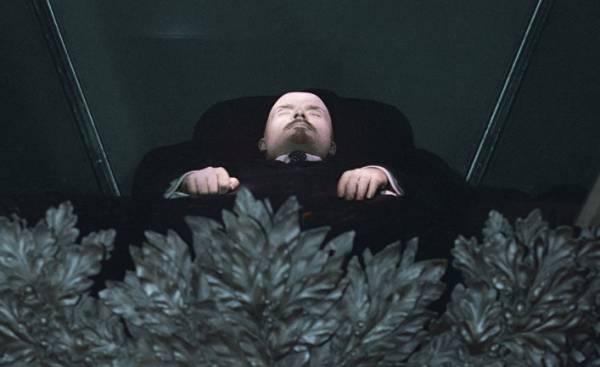 For more than 90 years the embalmed body of the founder of the Soviet Union on display in the Mausoleum on red square. The majority of Russians in favor of his burial. Putin centennial anniversary of the revolution provides an ideal opportunity to bury the last symbol of the Communist era.

In Russia there is active debate, but the result remains the same: after more than 90 years after the death of Lenin, his embalmed body is still in the open for visitors to the Mausoleum on red square in Moscow, right by the Kremlin wall. In the year that marks the centenary of the October revolution, the debate about the fate of the body of the founder of the Soviet Union erupted with new force. And with them came to the surface and ghosts, the return of which to the Russian rulers clearly not for everyone.

Whenever approaching one or the other anniversary related to the history of the Soviet Union, once again raises the question of whether to remove Lenin’s body from red square and bury him in the cemetery. This time, taking advantage of the anniversary of the Bolshevik revolution of 1917, the call was made by the Russian Orthodox Church outside of Russia (ROCOR). “One of the symbols of reconciliation of the Russian people with God could serve as the release the red square from the remains of the chief persecutor and tormentor of the XX century and devastate put a monument to him”, — reads the statement of religious organizations, published last week.

According to the TV channel RT, the request was read out during the service in all the parishes of this Church. It is not surprising that this call came from ROCOR, which was founded abroad after the 1917 revolution, the priests, escaped the Bolsheviks waged a crackdown. The resumption of relations between the Russian Orthodox Church abroad and RTSP occurred only in 2007.

Question about how to mark the centenary of the October revolution, became the main topic of discussion in most of the Russian independent media. One of the ways to enter in the current context are inconvenient for the Kremlin’s anniversary — think of it as an opportunity to “reconciliation” with the past. It in his address in fact refers to the Orthodox Church, showing its readiness to support this initiative. But this requires that the person who led the revolution that gave rise to the Soviet Union, left its current almost sacred place.

In turn, President Vladimir Putin, responding to the request of the Church and choosing this year to remove Lenin from red square, could once and for all close the topic with which he regularly faced.

The public was connected to disputes around the transfer of Lenin’s body from the Mausoleum on red square to another place in the late 1980-ies, during the reform period of perestroika. The collapse of the Soviet Union and the subsequent discrediting of the Communist party only intensified the debate. Gavriil Popov, the first mayor of Moscow in the post-Soviet era, was one of the most ardent supporters of the closure of the Mausoleum, the same opinion was held and the first leader of the Russian Federation Boris Yeltsin.

However, in contrast to Stalin, who became the personification of the violence of the Soviet regime, which was recognized by the Communist party, Lenin was able to maintain popularity in Russian society. Historian, University of Amsterdam mark Jansen in an email, told Público about the survey, indicating that 44% of Russians have a positive attitude toward Lenin. “Putin probably doesn’t want to lose [the support of] these people,” he adds.

The Minister of culture Vladimir Medinsky is one of the supporters of the “care” of Lenin from red square. “Perhaps, indeed, in our life symbolically, many things will change for the better after that,” he said in 2012, shortly after its entry into a new position. Most Russians seem to agree with him. The 2013 survey showed that more than 60% of the population support the idea of burial of the body in proper order.

However, the Mausoleum on red square continues to attract Russian and foreign tourists who every day stand in long queues to see the embalmed body of Lenin. Last year, the Russian government released information about the expenses of preserving the body, which amounted to 13 million rubles (183 thousand euros).

Meanwhile, Putin never openly supported the removal of Lenin’s body from red square, rather, he has always rejected the idea. According to Jansen, the Russian President fears the reaction of those sectors of society that still experience nostalgia for the Soviet era and Lenin, and whose voices “will not be able to count if he wants to be reelected next year with an overwhelming majority.”

The fear of the revolutionaries

Since coming to power in 2000, Putin is careful to the choice of historical events with the aim to instill in Russian society patriotism. 1990-e years is now perceived as a period of humiliation when Russia from a superpower turned into a country dwelling in permanent crisis and dependent on the good will of its former rivals. To inspire people a new pride in their homeland — in the first decade of this century was accompanied by economic boom due to the export of oil and natural gas, Putin has revived in the popular mind some of the most significant symbols of the Soviet past, especially the victory in the Second world war, known as the “Great Patriotic war”. With the arrival of Putin to the Kremlin for the celebration of Victory Day (9 may) has gained new strength.

At the same time the Russian leader has never hidden his admiration for the Imperial period, in which lie the ideological origins of nationalist sectors supporting it. “Hero Putin [Peter] Stolypin, the Prime Minister during the reign of Nicholas II, and to a much greater extent than the main characters of the 1917 revolution,” says Jansen.

In its attempt to appeal to the whole society Putin brings together the pride of the victory over Nazi Germany and the historical legacy of the tsarist regime. “Putin hopes that, by marrying the Soviet and Imperial past, we can preserve the core of the Russian Empire and avoid the fate of the monarchy,” writes the editor of The Economist Arkady Ostrovsky.

It seems that the Bolshevik revolution is here irrelevant, and in front of the Kremlin with its national narrative raises another dilemma. Putin’s power is based on stability as opposed to instability posed by popular uprisings. Putin’s biographers say that the revolution in different capitals of the countries of the former Soviet Union made him the worst enemy of the rebellion. On a more personal level, the view of the crowd gathered in front of the headquarters of the KGB in Dresden, where Putin worked in 1989, a few weeks after the fall of the Berlin wall left a deep imprint in the minds of future Russian leader.

“Putin’s regime does not like to remember the revolution,” notes Jansen. The known rejection of the Kremlin’s so-called “color revolutions” in the former Soviet Union, the last of which, held in 2014 on Independence square in Kiev led to the overthrow of President Viktor Yanukovych. Meanwhile, this hostility extends to and organized by Lenin in October 1917, the uprising against the Provisional government. In his speech in September 2014, Putin described as “complete betrayal of national interests” the Bolsheviks signed the peace Treaty with Germany and accused them that they “rocked” the country “to the fact that Russia as a state collapsed and declared itself a loser.”

Century Oct in is inconvenient for the Kremlin. The ideal solution would be to completely ignore the anniversary of one of the first in the history of “color revolutions”, but the year before the presidential election Putin does not want to alienate the voters whose votes can bring him the desired result.

To betray Lenin’s land would be a suitable way out of the situation? “There can never be certainty,” concludes mark Jansen. However one thing is certain: by removing the body of the former Soviet leader, Putin at least will give you the desire, which, according to some historians, Lenin expressed during the life: to be buried beside his mother in St. Petersburg.