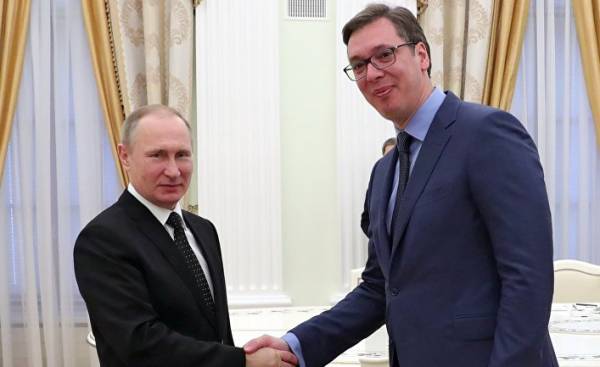 Guarantees, which are brought from the Kremlin, Prime Minister Aleksandar Vucic (we can now count on the political and military assistance from Russia in case of another turbulence in the Balkans), it is a clear message to the neighbours: in the case of attempts to transfer the conflict into our territory of Serbia, with the support of a powerful ally, I will answer adequately.

Russian President Vladimir Putin offered the assurances at a critical moment, when Pristina declared that will be engaged in the formation of the “army of Kosovo” in Macedonia when dramatic events happen, and Bosnia and Herzegovina is experiencing institutional crisis.

Russia has openly expressed concern at the growth of Albanian nationalism, which makes itself felt in Macedonia, where there are “dormant” units of the former Kosovo liberation Army. In the period of anarchy in Skopje Albanians louder saber-rattling and calling for the establishment of borders of the so-called natural Albania. The indirect impact of developments in Montenegro, which is one step away from joining NATO, and part of the territory which the Albanians also infringe.

That is, despite the opposition of NATO and the EU, Pristina still conduct secret negotiations on the purchase of weapons. In the future the Arsenal of Albanians would like to see anti-tank missiles, light artillery, and the third stage, and helicopters.

On the other hand, with a “military package”, agreed in Moscow in which six MiGs 29, 30 T-72 tanks and as many infantry fighting vehicles BRDM-2, the Serbian army will be practically the most equipped in the region and will be able to protect its territory and people.

According to our data, Putin also offered Serbia the possibility of supplying anti-aircraft missile systems “Buk” or “Tunguska” and in the event of a serious security crisis in the region and the possible delivery of s-300 systems. These weapons, according to experts in the field of security, Serbia can defend itself from most threats from the air and on the ground.

The news that Russia will help Serbia, placing military equipment in the event of a crisis in the Balkans, the former chief of the General staff of the army of Yugoslavia Branko Krga considering in the context of the fact that today Russia actually increased its support to the friendly countries, which was not in the 90-ies.

“On military equipment, especially modern such as air defense system, was negotiated before. There is no doubt that Russia wants to position itself as a global player that defends its interests abroad. It is not only military assistance but also on the full political and diplomatic support”, — said Branko Krga.

Political analyst Dejan Vuk Stankovic believes that the meeting with Putin is more important for Serbia as a state, than for Vucic that it is beneficial on the eve of presidential elections. “Putin is of course the most popular foreign politicians in Serbia, and a meeting with him adds Uucico points, but the positive in the talks that were strengthened when in the security sphere,” said Dejan Vuk Stankovic.

“Russian President Putin said he would sign a decree on the supply of military equipment. We asked that this military-technical assistance was provided on the basis of the military technical agreement, because it simplifies the procedure, and soon we will get these planes, will proceed with the repairs and modernization,” — said Tuesday the Minister of defence Zoran Djordjevic.

“Serbia will be a modern aircraft, which will be able to fully protect our skies and will guarantee the safety of all our citizens,” — said Gojevic.

In addition to aircraft, he said, also agreed on the supply of 30 T-72 tanks and the same number of infantry fighting vehicles BRDM-2.

“Both will be thoroughly modernized and renovated. We wait, when in Russia everything is ready, and it will be clear how we will deliver this equipment to Serbia”.