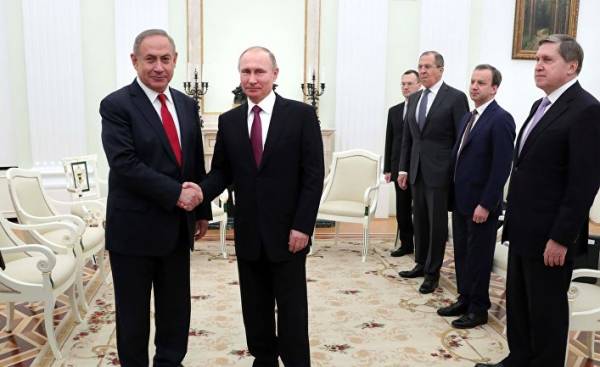 Spring guide to the Northern hemisphere offers very specific guidelines. For talks on Syria — the landing in Moscow. To develop business strategies and investment — landing in Beijing.

Earlier this month Putin met with the President of Turkey Recep Erdogan and the Prime Minister of Israel Benjamin Netanyahu. This is a clear demonstration of the return of Moscow to the middle East chess game. After the end of the cold war, the Kremlin’s influence in the region, only weakened.

Netanyahu visited the walls of the Kremlin just a day before Erdogan. Both came to Putin to Express concern about how Moscow promoted a potential peace agreement between the dictator Bashar al-Assad and a number of rebel groups will affect Syria.

Erdogan expects from Putin’s initiatives, not to allow the Syrian Kurds to strengthen their positions, as fears of separatist sentiment among the Kurdish population living in Turkey. Putting in first place the implementation of its authoritarian and nationalist political project, the Turkish President is looking for support from Moscow to prevent in their country the mutinous winds from Syrian territory.

Netanyahu also opened in the Kremlin a map of Syria. He claimed that for Israel it is unacceptable intensification in the Syrian possessions of the military position of Iran and Hezbollah, allies of Assad and supporters of the strategy still support the idea of the destruction of the Jewish state.

After hearing the demands of its guests, Putin publicly did not undertake any specific obligations. He plans to continue negotiations. However, positioning the Kremlin as the place where the fate of Syria, the Russian President in Russian and foreign media have sought to benefit from this demonstration of diplomatic and military force.

China, too, has spread the red carpet for the foreigners from the Middle East. To XI Jinping, on a visit welcomed king Salman of Saudi Arabia and Netanyahu. In the diplomatic fever the Chinese are hosted in less than a week two traditional American allies.

Saudi Arabia, in addition to the expansion of oil exports, sees China as a key partner in the process of transformation of its economy through the development of such areas as technology, and reducing dependence on the energy sector. Cooperation between Beijing and Riyadh also applies in areas such as defence, intelligence and space.

Also, the progress in Sino-Israeli partnership. Boasting ambitious investment potential, China exploring market opportunities start-UPS of the middle Eastern country, while the Israeli company is encouraging the idea of expanding access to the enormous consumer market of China.

Despite the changes, the U.S. continues to lead in the middle East, while remaining the most influential world power in the region. But they have to get used to the idea that this influence will soon share with China and Russia.