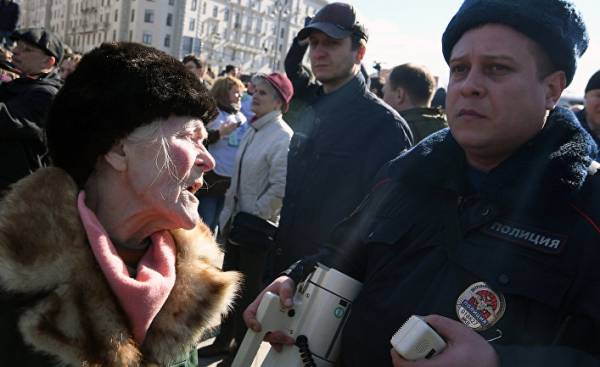 On 26 March, the Department of state on his Twitter page put a message saying “the United States condemns the detention of hundreds of peaceful protesters in #Russia today. The detention of peaceful protestors is an affront to democratic values”. This message on Twitter belonged to peaceful protest actions by the opposition against Putin’s corrupt administration, held in many cities of Russia. Russian media tried to downplay the significance of these protests, during which hundreds of protesters were arrested, including the leader of the opposition and Putin opponent Alexei Navalny.

This message Twitter the state Department is hypocritical, because he himself, and many other government departments, and officials remained silent or even joined in the suppression of the opposition, when peaceful protesters in the United States was attacked. Some users of the social network Twitter in response to the published photos of the soldiers of paramilitary police troops attacked peaceful protesters in the past few years in different parts of the United States.

“Really? It was opened more than 800 cases against unarmed protesters, against which used tear gas, water cannons, rubber bullets, etc. It was at standing Rock during a protest against the construction of the pipeline Dakota Access Pipeline”, — wrote on his Twitter page, referring to the state Department, Tara huska (Tara Houska), Director of the nonprofit organization “Honor the Earth” (Honor the Earth) and a former Advisor to Bernie Sanders. — It was not called an “affront to democratic values”, when hundreds of citizens of the United States was locked in the kennel for participating in protests against the construction of the pipeline Dakota Access Pipeline”.

Defenders of water in the place of passage through the territory of North Dakota pipeline Dakota Access Pipeline were met with water cannons in sub-zero temperatures, against them, used tear gas, rubber bullets and percussion grenades, and the guards of the pipeline was set on them their dogs, and some protesters suffered serious injuries. Some journalists, were at that time in that place had also been attacked — they were intimidated, impeded their professional work, while the local police conducted their own propaganda campaign to promote his version of the events.

Some Twitter users cited the example of protests in Ferguson, where police used military tactics to suppress and intimidate protesters, and this has led to the initiation of several criminal cases against the police who arrested, beat up the protesters and attacked them.

Republican lawmakers in some States across the country recently tried to hold a bill that restricted the civil liberties of protesters. During protests against the construction of the pipeline Dakota Access Pipeline the majority of the members of the Democratic party chose not to support its participants, but they tried to exploit a small victory for the protesters reached on 4 December last year, when the corps of engineers of the U.S. army (Army Corps of Engineers) has temporarily suspended the construction of this pipeline. When work resumed under the administration of trump, the Democrats once again disappeared from sight, despite the fact that their political opponents continued to discredit the protesters.

Link state on “democratic values” was also criticized and called hypocritical given the propensity of the Agency to conduct an interventionist policy in foreign States and approval of the sale of billions of dollars of weapons to countries such as Saudi Arabia. The Saudis then use those weapons to commit war crimes and human rights violations in Yemen.

Criticism posted on Twitter the message of the state Department do not argue with the claim that the actions of the Russian government against the peaceful protesters were undemocratic and violated human rights, but the silence of the us government is deafening in a time when police forces in the United States attack the protesters in the United States, intimidate them and suppress their statements.