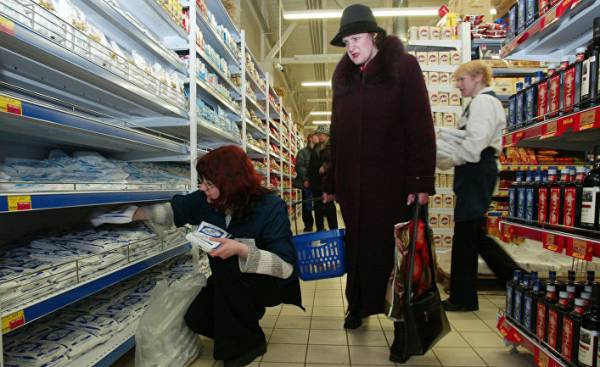 For several years from working abroad Latvians had to hear, quite frankly, strange stories, which I have long believed: the same food products, even cosmetics and household chemicals in Latvia and Western Europe differ. Coffee under the brand “X” or a washing powder called “Y” we have a worst quality than, for example, in Germany or Sweden.

And so, in the beginning of this year talking about it also, the media and politics. Oil was added to the fire investigation experts from Slovakia. By purchasing the same products in shops in Slovakia and Austria, they are the result of laboratory tests noted a significant difference in composition and quality. Thus, the existence of a European “second class” has been verified by scientific methods. Moreover, based on my personal experience, I can say that there is also Europe “third grade.” Such is the Ukraine sold there international brands as coffee or tea is very high quality.

This sort of people, to the Europeans the “first” and “second” class after almost 30 years after the fall of Communist regimes and the collapse of the Soviet Union, at least, it seems to me insulting and dishonest. Naturally, coffee or washing powder produced by the government of Germany or Sweden, are large corporations who own brand name products. However, that same thinking prevails in the minds of not only entrepreneurs, but also politicians in Western Europe indicate an increasingly loud talk of a “Europe of two speeds”. This is supported by Belgium, France, Italy, Luxembourg, the Netherlands, and especially those now in power in German politics. The essence of the idea — deepening integration among a few select States the “core of Europe”.

In reality, this will mean that in Europe is something similar to the “ruling center” and “periphery obedient”, which buys goods of inferior quality, delivers the “center” of such a valuable work force and in addition to this, paradoxically, takes care of its safety. A good example is the most rich state of the EU and NATO in Luxembourg. There gross domestic product per capita is around 100 thousand US dollars, which is approximately four times more than Latvia. In turn, defense Luxembourg spends only 0.4% of its GDP, a percentage that is almost four times less than Latvia (1.5% of GDP). One of the authors of this policy is the current President of the European Commission Jean-Claude Juncker, who from 1995 to 2013 was the Prime Minister of Luxembourg. The costs of defense of Belgium, the Netherlands and especially Germany in percent of GDP is several times lower than in Latvia, which is much poorer. The only located in continental Europe, the countries-members of NATO, sacrificing defense 2% of GDP, are on the “periphery” — Greece, Estonia and Poland. By the way, this unpleasant truth German Chancellor Angela Merkel said during a recent meeting, the U.S. President Donald trump.

The game is rigged, and it is also observed in other areas. While Latvia is struggling with the flight from taxes and limits the provision of paid permit, Italy has just announced the tax status of the oasis and on the issuance of Schengen (and, therefore, Latvia) visas to anyone who invests in the government 1 million euros.

I hope that the politicians “periphery” have the courage to slow down the project of Europe of “two speeds”. Returning to the quality of food: the best response to international concerns on their manufactured “especially for us” products — a range of local Latvian products. We do often claim that they are the greenest, most delicious, most useful, and therefore — the best. The time has come more consistently carry out a policy of purchases in everyday life, so to speak “to beat the Euro”. Those for whom the most important profit, the other does not understand the language.