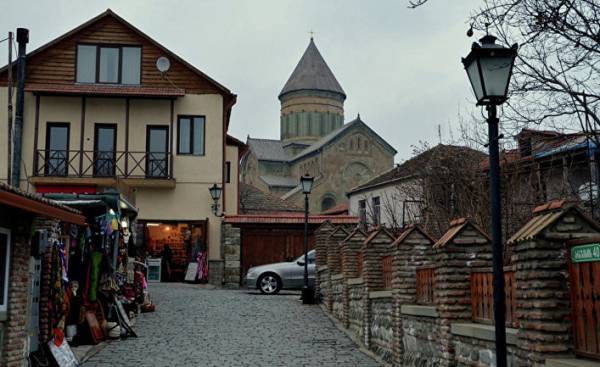 Georgia has always been a multinational country. And such it remains today, despite the ravages of war, which was painted only as an ethnic and, respectively, also presented to the world community. But today is not about wars, but about the lives of ethnic minorities, about their problems. Questions on the “Georgia online” answers Sophia, Shamanidi, Advisor to the President of Georgia on issues of ethnic minorities.

The “Georgia online”: You Recently met with students who represent ethnic minorities of Georgia. What problems are they most concerned about?

Sofia, Shamanidi: the problem of ethnic youth Affairs of Georgia similar to those that are concerned about youth in General, and most important — employment. Unfortunately, unemployment is a very serious problem for our entire society.

— We often hear that among ethnic minority and the rest of the population of Georgia there are certain alienation and this is because they are not integrated into our society. What students think about this?

— After the project “1+4” began to act in all our universities, significantly increased the number of students from ethnic minorities, which itself is a positive phenomenon. Through this project, young people increasingly remain in Georgia and to higher education, not leaving to other countries, such as Russia, Armenia, Azerbaijan only because they do not know the Georgian language. This is a step towards integration. In addition, in our universities involved in various projects promoting integration, for example, one of the projects funded by the Presidential Fund, works at the University of Samtskhe-Javakheti (region of Georgia, where most of the populations are ethnic Armenians — approx. edition), although this is not enough. I think the students themselves must take more initiative, actively participate in student life and in different University activities.

— Maybe lack of awareness is one of the causes of weak integration, as was noted Ucha Nanuashvili, the protector on human rights of Georgia…

— Of course, this is one of those factors that would harm integration. Despite the fact that the Charter of the Public television written (and they are obliged to do according to the plan of action of charity and civic integration) that a certain percentage of broadcasts should reflect the problems of ethnic minorities in the languages they can understand, the only news program “Moambe” reports the news in those languages, and that very briefly, because time limited. Moreover, TV channels do not cover the regions inhabited by ethnic minorities and main source of information for them are Russian TV channels. Despite the constant talk around this issue, changes are still there, and the so-called reform of Public broadcasting, as can be seen, even more will alienate viewers from the television.

— At what level is the training of the Georgian language in those regions and if they have the desire to learn the state language?

— I can’t say that the problem is solved, despite the fact that it was predprinyata many steps in this direction. Earlier, I spoke about the program “1+4”, in addition, several projects by the Ministry of education and science of Georgia. You will not find a school where no teacher of the Georgian language, although the problem is not the number of programs and the quality and proper methodology. But you can definitely say one thing — never before, work in this direction has not been as intense as today. In addition to these projects, the third year of the functioning of the presidential program “Learn Georgian”, which covers 75 villages throughout Georgia (except the occupied Georgian regions — Abkhazia and Samachablo, which is attended by 5 thousand 800 people. The program differs from similar fact that training are not in regional centers and in the most remote villages, where professors teach, state University and Samtskhe-Javakheti universities, specifically for the project was written in the textbooks. Of course, courses are free. In 2016, together with the training of the Georgian language, visitors get acquainted with the Constitution of Georgia.

As for the desire to learn Georgian language before the beginning of the project we have studied the situation, but then there was obviously so many people who so we with skepticism attitude to the pilot, but the demand was so high that we had to open additional groups. I think the ethnic minorities were aware that without knowledge of the state language is difficult to integrate into society.

— What textbooks they study — write them in Georgia or in the neighboring countries and then imported?

— Unfortunately, the problem still is not solved, therefore, the textbooks came from Armenia and Azerbaijan.

— As far as our ethnic minorities are interested in the European choice of Georgia conducted meetings and conversations about the pros and the benefits of cooperation with the EU, which can positively affect their well-being?

— After the signing of the Association Agreement with the EU, various governmental agencies, local and international NGOs have intensively started to work with the population of Georgia, explaining what it means for us an Agreement, why is it important rapprochement with Europe, etc. In this process, special attention is paid to regions with ethnic minorities, several projects in this direction was carried out and the presidential administration.

Media and non-governmental organizations (NGOs) have consistently expressed concern that in some regions, parents marry 12-14 year old daughters, ignoring the Georgian legislation that prohibits such. How do you see the problem?

— It is necessary to work not only with youth but also with parents and the Ministers of religious organizations. In 2016, in the villages of densely populated by Azerbaijanis, we launched a pilot program to raise consciousness on this issue. This year, in collaboration with UNICEF and NGOs, “szapary”, we plan to continue working in the Kartli region. Should be created a precedent, when a person who cohabits with a minor, is punished. The law should be involved.