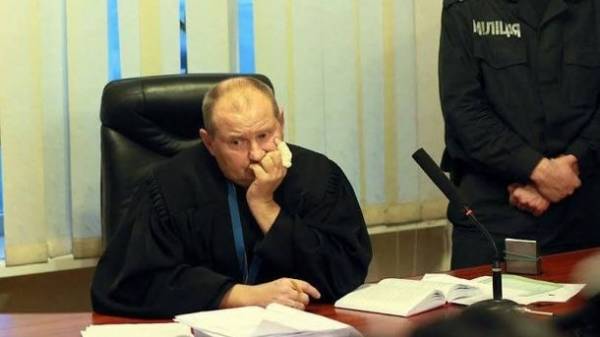 The appellate court of Kiev left the custody as a preventive measure against a judge of the Dnieper district court of the capital Nicholas Chaus, who is hiding from the Ukrainian justice in Moldova, but abolished the right to bail.

This was reported today press service of the Kyiv court of Appeals.

Yesterday, March 23, the court considered the appeal filed in the interests of the suspect Chaus, the determination of the investigating judge of the solomiansky district court of Kyiv on 18 January 2017, which is applied in respect of Leadership of the measure of restraint in form of detention with the purpose of Deposit in the amount of 3.7 million UAH.

“By results of appeal consideration by the panel of judges on the court of criminal Appeal court of Kyiv decided… the definition of the investigative judge of Solomyansky district court of Kyiv from 18 January 2017 – to cancel; to approve a new definition, which the motion of the senior investigator of the National anticorruption Bureau of Ukraine on the use of remand in custody against the suspect Chaus N.. – partially satisfy; to elect the suspected Chaus N.. the measure of restraint in form of detention”, – is spoken in the message.

As reported, on 1 March, the staff of Prosecutor’s office of Moldova detained in his country, Nicholas Chaus, who surrendered to law enforcement.

Recall that on September 6 Verkhovna Rada of Ukraine gave the consent to the arrest and prosecution of judges of the Dnieper district court of Kyiv Nikolay Chaus, who is suspected of corrupt activities. The corresponding resolution was signed by speaker Andriy Parubiy.

As earlier reported, Chaus was not in the GPU for presenting him with suspicion. The judge exposed on a bribe in 150 thousand dollars. The money he kept in glass jars.
On November 11, Chaus was put by the Interpol on the international wanted list.