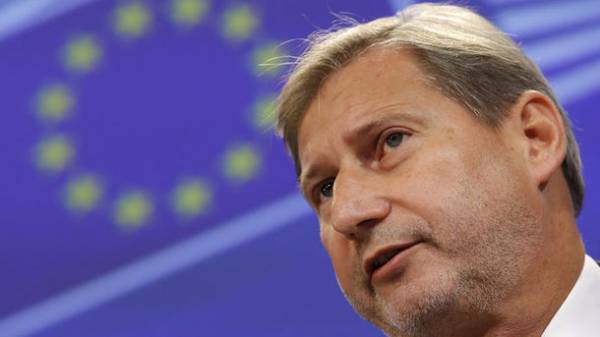 European Commissioner for European neighbourhood policy and enlargement Johannes Khan during a meeting with Deputy Prime Minister for European integration of Ukraine Ivanna klympush-Tsintsadze condemned, made by the Verkhovna Rada of Ukraine on Thursday, amendments to the law on electronic Declaration.

“Good exchange of views with VPM (Vice-Prime Minister – ed.) klympush-Tsintsadze on the complex challenges facing Ukraine and the impressive achievements in the reform process (+ongoing)… Changes in the law on e-Declaration is a step back, not forward, and should be revised,” wrote Khan on his page on Twitter on Friday evening.

Commenting on the situation with the law on e-Declaration, Khan noted that a key role in the fight against corruption anti-corruption play a public organization.

“E-Declaration must be focused on corruption in the public administration, not to obstruct the work of civil society,” he wrote.

As reported, the Verkhovna Rada 268 votes Thursday approved the law No. 6172, which freed troops, NCOs, petty officers and squads, Junior officers from the obligation to file e-Declaration, and ordered them to serve “fighters” (leaders, or members of the management body of public associations that carry out activities on anti-corruption), members of the public councils under state bodies, candidates for elected office.

During the consideration of the second reading and adoption of the draft law the Parliament adopted a large number of amendments, some of which the authors changed the voice. Thus, currently the final text of the adopted document is not known.

The head of the Committee on prevention of corruption Yegor Sobolev said that is not going to sign the adopted on Thursday. “I will not sign the law if it would be contrary to law, and its provisions will exclude each other,” he said, adding that the Parliament adopted the law is not in the wording which was approved at the meeting of the Committee.

On the same day at the U.S. Embassy in Ukraine stated that amendments to the legislation, expands the list of persons who are obliged to file electronic declarations of their assets and income by public officials, is a step backwards in the reform process in Ukraine. “E-Declaration for senior government officials is a strong step forward in the promotion of reforms in Ukraine. Members of civil society play a vital role in ensuring transparency; to make their target – take a step back”, – stated in the message of Embassy, posted on the social network Twitter on Thursday evening.

People’s deputies of Ukraine from the faction “Samopomich” Sobolev and Roman semenukha proposed to repeal the law, registering for the draft resolution No. 6172-P cancellation of results of voting. In the explanatory note, the authors pointed out that when considering the law has been violated some provisions of the Regulations of the Verkhovna Rada, in particular, “a number of amendments not related to the fact, the name of the draft law and went beyond the text of the law adopted by the Verkhovna Rada as a basis”.

However, on Friday, the Rada has not supported this suggestion, giving him only 46 votes. Not supporting the draft resolution on the abolition of the law, the deputies opened the opportunity for the Chairman of the Verkhovna Rada to sign the law.