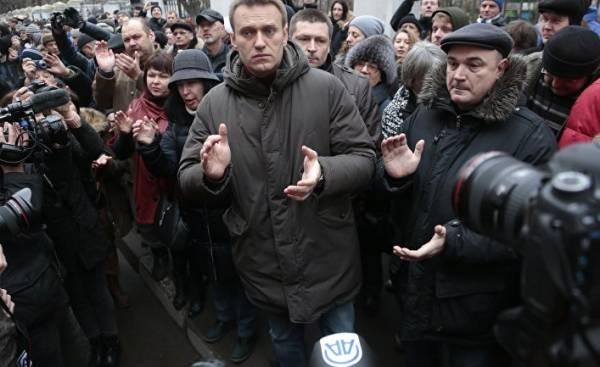 Opposition activist Alexei Navalny has again become a stone in the Shoe of President Putin. Navalny is going to run for the presidential elections to be held next spring, and travels across Russia, opening offices for the campaign.

The symbol of the demonstrations against the election of Putin as President in 2012 and the most known blogger of Russia called for anti-corruption demonstrations on March 26. In his opinion, they held on, despite the prohibitions of the authorities.

The beginning of the campaign was not without trouble. March 19 remaining in the Siberian city of Barnaul, unknown persons threw brilliant green in the face Bulk.

This trick didn’t stop Alexis. The leader of the opposition published in the Internet video, where jokingly called himself Shrek or avatar. Watched the video about a million people.

The doctor and researcher Alexander Institute Jussi Lassila (Lassila Jussi), studying populism in Russia, believes that being a skilled politician and a skilled populist, Navalny was able to exploit the situation for their own purposes.

“He even managed to organize flash mobs in which opposition-minded young people began to paint the face in green”.

Alexei Navalny is known for its blog, in which he has more than 10 years, criticizes the government and denounces cases of corruption.

The election campaign Navalny immediately made a lot of noise. In early March, his “Fund of struggle against corruption” published an investigation about the presence of a huge property at Prime Minister Dmitry Medvedev.
The materials of the investigation indicated that the Prime Minister owns several estates, two pleasure yachts and vineyards in Tuscany. The Kremlin considered the investigation fiction and TV channels practically did not raise this issue.

The video investigation is still viewed by 10 million people. According to the researcher Lassila, Navalny became even more famous thanks to new revelations.

Lassila describes Navalny as a populist new sample that reveals corruption among those in power and stands on the side of the people.

“In his articles Bulk emphasizes that all ordinary Russian citizens support him, if even a little think”.

Opposes the construction of mosques in Moscow

Navalny was at the head of the Grand demonstrations of 2011 and 2012 that were directed against election fraud. In his blog, he called the ruling party “United Russia” “party of crooks and thieves”.

In 2013, Navalny announced his candidacy for mayor of Moscow. He organized a wide network of volunteers and collected more than a quarter of the vote.

“Navalny showed the other members of the opposition that they just can’t organize the broad masses,” says Lassila.

One of the reasons for the success Bulk is fanned them campaign against migrants.

“He says that the city is no place for mosques and Tajiks. Navalny spends almost the same campaign, such as Geert Wilders (Geert Wilders) in the Netherlands”, — says Lassila.

Such ideas were expressed Bulk before. In 2007 he was expelled from the liberal party “Yabloko” with the phrase “nationalist activities”.

Confuse the plans of the Kremlin

To date, the Russian authorities put pressure on Navalny mainly through arrests and trials. Twice he was accused of economic crimes, but convictions have been replaced by a conditional.

Officially, Navalny has no right to stand as a candidate in the presidential election as long as the sentences have power. Navalny appealed against the sentences.

Education Navalny is a lawyer. According to Lassila, he was able to demonstrate the arbitrariness of the justice system and to show that he is acting fully within the law.

“Now he has a halo charismatic leader, because he gives the impression of a man struggling with power, not sparing their own lives”.

The Kremlin would be happy to voters blessed the continuation of the current policy in the upcoming presidential elections next spring. It seems that the Bulk confuses these plans.

“Elections of the mayor of Moscow has shown that in open elections, Navalny is dangerous to the Kremlin. But too much has to happen, that he won the presidential elections”, — said Lassila.