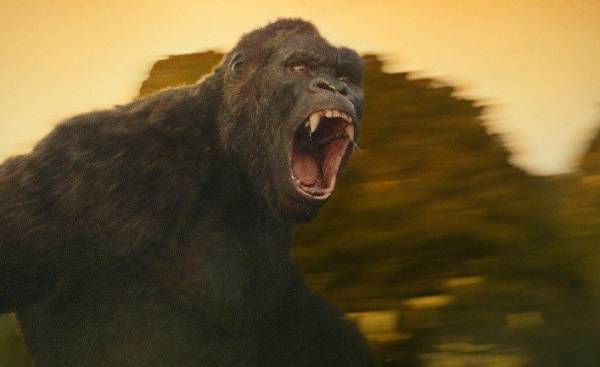 Imagine that you travel by helicopter to the unexplored island waiting to be trapped in a giant APE-like creatures with a height over one hundred feet and a weight of 158 tons. With fierce force your opponent launches a tree trunk directly into the helicopter, then proceeds to destroy and trample everything in its path, with a wild roar as it rushed through your friends — and so for the next two hours. So it looks like the film “Kong: skull Island”, a new take on the media franchise 80 years ago, based on the notorious king Kong.

Note the “Skull Island” does not pretend to scientific accuracy. But we could not resist the question: how could even dwell on our planet creature, comparable in size with this walking skyscraper? Enough power to crush the helicopters in their own legs, or he would have simply collapsed, unable to bear the weight of his own body?

For a start, explain the possibility that somewhere on Earth lives no one knows king Kong and other giant APE, are excluded. “King Kong as he is depicted in the film, in all probability, is not physically viable organism,” says Jonathan Payne (Jonathan Payne), paleobiology from Stanford University, spent an extensive study of how body size evolved in the course of historical development of life on Earth. Main reasons: gravity and biomechanics.

If you take any animal and increase it in size, according to the laws of mathematics, its mass should build in CC, However, when the same ratio of increase the size of the width of his body, and consequently bones and muscles will grow only in the square, says Payne. “As you become bigger, you need to give greater body weight to the bones, to create a foothold,” he says.

That is why we do not observe in nature, larger representatives such creatures, such as spider-dolgonogi — those arachnids are not more than inch size, which sometimes appear in the bathroom. “Their legs would buckled under the weight of the body,” says Payne. (Goosebumps).

Due to these laws, to take a typical 350-pound Western gorilla and just increase it 20 times it would be physically impossible; the skeleton and muscles of the creatures can not withstand its weight. Larger animals need more massive and thick limbs that would support them, says paleoecology of the University of new Mexico Smith, Felisa (Felisa Smith), and that’s why our planet is barely lived creatures, the weight of which would exceed one hundred tons.

“Poor king Kong was not even able to roll from side to side, says Smith — not to mention the fact to attack people and helicopters.”

It is therefore not surprising that the largest land animals on the planet — elephants — today, much less king Kong. So, African elephants can reach about 13 feet tall and weigh up to 7.5 tons. However, in the past the animal world could boast of a more impressive size of the species: dinosaurs like titanosaurus, weighed nearly 80 tons, ten times more weight to today’s African elephants, but to the fictional king Kong, they were still far away.

The reason is that dinosaurs were reptiles, and today we are living in the epoch of the mammals. To maintain a higher body temperature of warm-blooded mammals spend metabolism is about ten times more energy than cold-blooded reptiles. This is the energy that mammals are unable to direct the increase in the size of your body. Therefore, says Smith, it is logical that the largest of the known mammals are about ten times smaller than the largest discovered human reptiles.

How about a blue whale the biggest animal ever existed on Earth, weighing more than 200 tons? In the water are subject to different laws. The lifting force of the water helps to support the bodies of marine creatures, taking some of the strain with their muscles and skeletons. According to Smith, in theory blue whales can be more than they are now, but, according to biologists, the main limitation stands relatively short for such large animals the period of gestation is only 11 months.

(Similarly, we can assume that the planet with lower than Earth gravity, like Mars, earth creatures, are less burdened by their weight, will be able to reach large sizes).

Meanwhile, there is another key limiting factor: food. 158-ton monkey to sustain the necessary large quantities of food, and the island of the Skull is hardly so much food, of course, if there won’t be regularly dropping helicopters full of delicious people.

According to Smith, usually need to produce more food means access to a proportionately much larger territory. In search of krill, the blue whales swim within a radius of thousands of miles, but African elephants can cover distances up to 80 miles a day to get a plant food. Large animals living on Islands tend to become smaller in size to compensate for the limited number of potential food sources, says Payne. Example — extinct species of dwarf elephants that once lived on Islands in the Mediterranean sea. So king Kong should rather resemble the dwarf gorilla, not the giant.

What evolutionary factors provide advantages for larger animals, given all the obvious drawbacks? “To increase the size there should be some selective advantage,” says Smith. Example: not to be eaten. Since small animals are predators more easy prey, in the course of natural selection a species can become larger to better protect themselves. However, here we can talk about a kind of compromise, since large animals tend to move much slower than smaller (see the above lesson on biomechanics).

To be much larger than the other means the ability to get much more food, says Payne. A classic example is the giraffe, which is an impressive growth allows to reach the plants, not accessible to other animals. Likewise, blue whales using the baleen can filter large amounts of water, which allows them to capture the day to eight thousand pounds of plankton, where every shrimp can be the size of a finger.

Let’s face it: from a scientific point of view, king Kong can be in the same flight of fantasy as the Hollywood. But Payne is not willing to completely exclude the possibility that once on the Ground there was indeed such a big life form. “In these cases, I do not like to say “never,” he admits. — Whenever you think life is something not capable, she often finds ways to do it… Life never ceases to surprise us”.