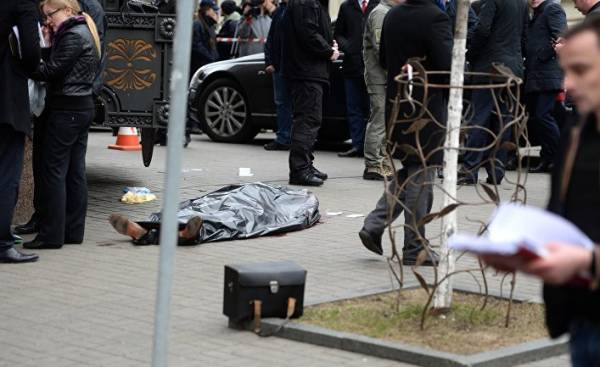 In February ex-MP Sodomy Minister Denis Voronenkov, who was killed Thursday, March 23, explained why the Kremlin irritation took its flight to Ukraine: he believed that the authorities will show on its example that you can’t do that.

A month ago, the journalists NV met with former state Duma Deputy Denis by Voronenkova in the hotel “Premier Palace”, near which he was killed today. Only then became aware that he had received Ukrainian citizenship.

In the press and social networks are actively discussed, for what services he received the Ukrainian passport, as this is related to the fact that Voronenkov is evidence against the former President Yanukovych in the Ukrainian court and what he actually political views. He claimed that he left Russia because he feels a threat to its security.

Then, in February, HB met Voronenkova to ask him about the internal political kitchen of Russia, to know what is really going on in the building called the state Duma, where he spent the last five years and how the functions built by the Kremlin’s vertical of power. In the same interview he explained why the Kremlin writhed in hysterics, as he put it, in connection with his departure. He believed that in his example, the Kremlin will show the Russians that Ukraine is a taboo for them.

“The work of information and propaganda machine against me, called a warning. A warning to everyone else, so they don’t think like me, to go to Ukraine, or generally even look in this direction”, — he said in this interview.

We publish it again to show why he could kill Boronenkov and what mesedzh from his mouth might have been afraid in the Kremlin.

“New times”: How did you get in Ukraine? It was an escape or is it just moving?

Denis Boronenkov: I’m not running. I am a free man, independent, have no commitment and choose their place of residence where I’m comfortable. To politicize this whole situation, I would not, because the political Exodus suggests, perhaps, some political implementation in the future.

The situation in Russia is tense to the limit. Of course, today it is a state of double standards. People say one thing, think another, do the third. It is a police state, repressive, authoritarian. Therefore, to Express their point of view is very dangerous. The government does not accept any criticism, especially if you are a public person, have a certain reputation. My coming here was dictated, first and foremost, desire to live and work in Ukraine — peacefully, in a free country, with a family to raise children. To do what has become impossible in the current Russian Federation.

Now among scientists there is such a point of view that your visit to Ukraine — the so-called Russian political migration. And it may soon in Kiev worth the wait and many other officials and politicians from Russia. What do you think?

Everywhere there are divisions. What does the Ukraine have the political solidity? We see the same thing — there are a huge number of political forces, torn to pieces. If there was a single elite, it probably would have happened to economic developments and reforms. In any country this happens. Russia, in particular, is no exception. Of course, Russia is more monolithic. But it is a Colossus with feet of clay. Everything rests mainly on fatal fear. The fear of losing their jobs, freedom and other things.

— Why your leaving caused such a scandal?

— I don’t know why the Russian authorities in such hysterics huddled why the media goes on a week, and I’m being a national traitor. The work of information and propaganda machine against me, called a warning. A warning to everyone else, so they don’t think like me, to go to Ukraine, or even to look in that direction. That is, the government thereby gives the signal for the intellectual thinking part of society that you can go to any country in the world, and we never do never say, won’t you subjected to any reprisals. But only if you leave the Ukraine.

— The authorities are very painful to any person who goes inside the system. I was not an open opposition in Russia. In contrast, maybe Ilya Ponomarev, Dmitry Gudkov, who have always openly opposed the authority. I’m not trying here to imagine now that I was a. No. Do I inside the system tried to do something, I differed from her, were never all in the same boat. Unfortunately, I did not succeed. I overestimated their strength, I realized that now threaten my life, my freedom. Therefore, as a person informed, who previously worked in special services, I decided to leave.

— What you told the Ukrainian investigation? Is it true that the testimony you somehow have contributed to the citizenship?

— I gave evidence against Yanukovych. This is a public trial where everything will be known. The time will come when all will become clear.