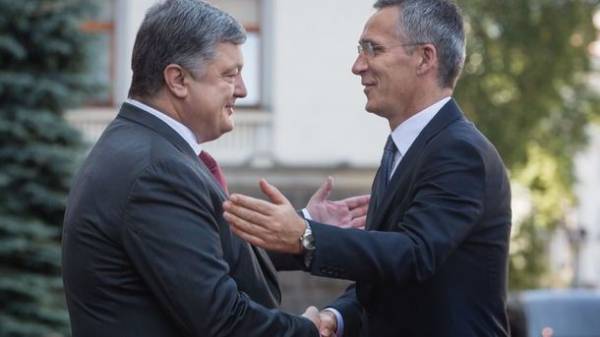 The North Atlantic Treaty organization (NATO) will continue to maintain relations with Ukraine in defense matters and reforms. About it today in Kiev, said the Secretary General of the Alliance Jens Stoltenberg.

“Today we celebrate the 20th anniversary of the signing of the Charter on a distinctive partnership between NATO and Ukraine”, – said the Secretary General.

Stoltenberg also noted Ukraine’s contribution to the cause of NATO and expressed support for Ukraine.

“We sincerely appreciate the many contributions of Ukraine to the Alliance over the past two decades. Ukraine is the only country-partner of NATO that participates in all missions and NATO, including Afghanistan and Kosovo. We are also here to demonstrate the solidarity of NATO with Ukraine, as well as our firm support for the sovereignty and territorial integrity. Russia continues its aggressive actions against Ukraine, but NATO and NATO countries stand by your side,” – said Stoltenberg.

According to him, NATO countries “do not recognize and will never recognize the illegitimate and illegal annexation of Crimea by Russia”. The Alliance is also concerned about the situation in the Donbas.

“We are concerned about the situation in the East of Ukraine, which has claimed thousands of lives. Minsk agreement must be fully implemented. The observation mission of the OSCE should get a full safe and unhindered access to the whole Ukraine. From 2014, the year NATO is significantly increasing its support to Ukraine. At the summit in Warsaw a year ago, NATO agreed a comprehensive package of assistance to Ukraine to help Ukraine to ensure its security and assist in the implementation of large-scale reforms in the security sector and defense”, – said the Secretary General.

Stoltenberg said that NATO will continue to support ambitious, according to him, the program of Ukrainian reforms.

“We welcome Ukraine’s progress in implementing these reforms, despite extremely difficult circumstances, and encourage you to continue on this path. NATO is a friend of Ukraine. Also, as Ukraine is one of NATO”, – he said.

“We believe that an independent, sovereign and stable Ukraine, sincerely devoted to democracy and the rule of law is key to Euro-Atlantic security. We welcome the opportunity to continue and strengthen our friendship and partnership with Ukraine,” said Stoltenberg.

Recall, NATO Secretary General arrived in Kyiv, including to attend the meeting of the Commission Ukraine-NATO with the participation of the President of Ukraine Petro Poroshenko.