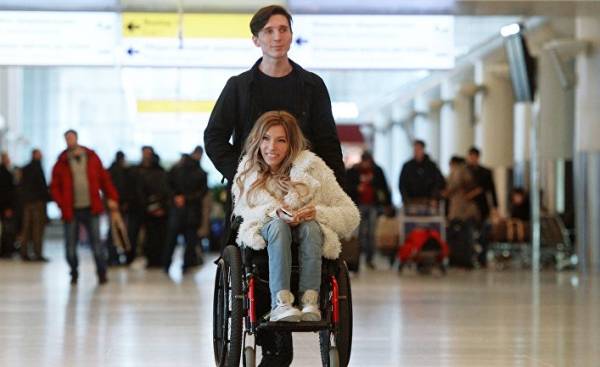 To represent Russia at “Eurovision-2017” was 27-year-old singer Yulia Samoylova, who with 13 years of wheelchair. However, the security Service of Ukraine made Samoylova in the list of persons whose entry into Ukraine, forbid

In the summer of 2015, Samoilova acted in the Crimea, entered the Peninsula with Russia. SBU considers Crimea occupied territory, and all who visited it without going through Ukrainian customs without a special permit — violators of the law.


The European broadcasting Union, the organizer of the song contest, expressed his disappointment with the decision of the Ukrainian authorities, but noted that the laws of the host party should be respected. However, the organizers will try to persuade Kiev to change its decision. For this outcome of a conflict situation and I hope in the Kremlin.

“We also believe this decision is extremely unfortunate, and in fact, we would certainly expect that the decision to contest will be reviewed and the Russian participant will be able to participate in this competition”, — said the press Secretary of the President of Russia Dmitry Peskov. In his opinion, “the decision of the Ukrainian side seriously devalues the upcoming competition, this is a blow to the prestige of “Eurovision”.

The decision of the SBU about the ban on entry to Ukraine of Yulia Samoilova does not mean a ban on the participation of Russia in “Eurovision”. Russian First channel, which is authorized to engage in the selection of participants for this competition may name another person to represent the country. For example, recently British singer Robbie Williams has expressed a desire to represent Russia at “Eurovision”

Now in the Russian media widely discussed the scenarios, and many are inclined to believe that Russia needs to go on principle — to refuse to participate in the contest this year if the decision for Samoilova is not revised, and do not broadcast the contest on the Russian channels.

For example, Philip believes that “Russia should not take part in the competition until that moment, until everyone responsible for this decision did not leave the posts, and the competition will not return to what was intended”.

Producer Joseph Prigozhin is suggested not to risk the members of the Russian delegation on site, “where we’re not wanted”.

“I think now we should direct all shop letters to Western artists, the Western media and tell the whole world that they have a tolerant attitude should be not only to bearded women, but to people with disabilities. I know that Europe is particularly anxious about this, then they need to stand up and present all sorts of claims, and we — if the European broadcasting Union will take place like this “Eurovision”, we should refuse to participate fully in the near future” — said Prigogine in comments to RIA “Novosti”.

Music critic Dmitry Shavyrin believes that Russia should refuse to participate in Eurovision “once and forever”.

“Still there will be provocations against Julia, still Europe will vote against it. Do we need to forget about this contest once and for all, it has outlived its usefulness, the time has passed ABBA,” said saverin in comments to RIA “Novosti”.

March 22, TV channel “Russia” announced that in 2017 the “Eurovision” the Russian Federation will not be represented, as decided not to look for a replacement Yulia Samoilova. The girl will represent her country at Eurovision in 2018. It was also stated that all Russian TV channels in protest, refused to broadcast “Eurovision” in Kiev.

However, the administration of the First channel that should broadcast “Eurovision-2017”, the correspondent Газеты.Ru not confirmed their intention to withdraw from the show competition.

Russia should act in the second semifinal on may 11. In this semi-final will act as the representative of the Belarus group Navi. The final will take place on may 13.