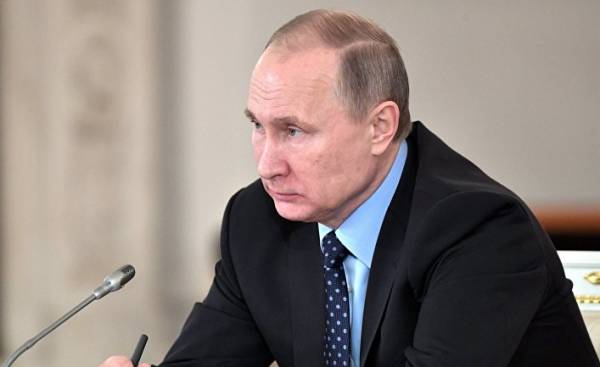 Two years ago when Garry Kasparov, the chess champion, now a political dissident, warned that Vladimir Putin sought to undermine liberal democracy — not only in Russia’s neighboring countries, but throughout the West — many found these statements strange. Now that Russia has managed to hack the servers of the National Committee of the democratic party and began to spread false news on an industrial scale, his words starting to look prophetic.

However, the apparent scale of what is happening only in the last week, thanks to the journalists who published dozens of materials about Russia’s intervention in the democratic processes.

The American press understandably focuses primarily on the strange relationships between the Kremlin and the White house of Donald trump. So here rarely notice that Russia, in addition:

— Actively supports the far-right populist marine Le Pen (Marine Le Pen), where victory in the upcoming presidential elections in France will threaten the very existence of the European Union.

— Establishes close relationships with “Alternative for Germany” anti-Muslim and anti-American party, sometimes with an interest in Nazi legacy. (“The big problem is that Hitler depict absolute evil,” — said in a recent Wall Street Journal one of its representatives.)

— Trying to frame the authorities of the European countries that accepted large number of refugees, spreading fabrications about the crimes committed by the newcomers, and even offered troubled youth in the Stockholm suburb of money for the riots “on camera”.

— Provide assistance to any parties who are ready to fulfill the will of Moscow. For example, in Italy, Putin’s party, United Russia signed a cooperation agreement with the far-right “Northern League” and at the same time began negotiating the same agreement with the formally leftist movement “Five stars”.

“Russian officials are shocked that their plan is to delegitimize Western democracies is much faster than expected,” he joked recently Onion. The joke was really funny. However, the frightening reality is that Russia does not confuse their own success. On the contrary, they encourage it. After the impressive victory in the United States, Moscow has redoubled its efforts to undermine democracy all the way from Canada to Croatia and from Greece to Sweden.

In all this there is something amazing. During the cold war the Kremlin had a deep ideological reason to believe that the United States struggle with the Soviet Union for world domination. The theory of scientific socialism, which is formally based in the Soviet society, predicted that communism must conquer the Earth. Accordingly, if the proletarians of all countries have not demonstrated a thrust to connect, that questioned the very legitimacy of the Soviet Union. In addition to export communism existed practical reasons. Since the capitalist and the Communist countries almost did not trade with each other, the transition in the Communist camp of the technologically advanced countries — such as France or Italy would provide the Soviet Union the large economic advantages.

On the contrary, the causes of the current clashes are much less deep. The legitimacy of Putin’s rule does not depend on the export of Putin’s corrupt type of capitalism in other countries. The economic benefits of regime change in other countries, too, Putin does not. Moreover, while it respected the sovereignty of neighbouring countries, Germany and the United States quite willingly traded with Russia, despite the fact that Putin’s regime became more and more kleptocratic.

Thus, Putin’s seemingly little reason to spend diminishing resources of his country to the world, the struggle with liberal democracy. In this regard, there is the temptation to find his antics just a desperate bluff. But to think so would be a mistake. Whatever ridiculous it may look, this pattern is reproduced in the mind of the Russian leader’s ideological confrontation between the East and the West, Putin seems, in fact, is convinced that Russia can prosper only in the case that liberal democracy will fail.

It is not only that Putin, like many, believes the collapse of the Soviet Union “the greatest geopolitical catastrophe” of the 20th century. And not even that, as he wrote Joshua Keating (Joshua Keating), he was very offended by the West and now seeks revenge. More important than those broad conclusions he makes from these two assumptions.

In his opinion, Russia can regain its former strength, only by creating a reliable and extensive sphere of influence, which is impossible, while neighboring States — such as Georgia and Ukraine — can decide their fate. In addition, he is confident that Russia will not enjoy genuine respect from other countries if it will remain autocratic anomaly surrounded by democratic countries.

Accordingly, the answer to the question of how Putin acts rationally, depends on what we consider rational. If we assume that he just wants to consolidate his power and the Russian economy, its actions will look foolish. But if we understand that he is trying to turn Russia into the paramount power, fearsome enemies and serving the vassals subject to follow, we will see that he plays te mediocre cards that he received in the distribution.

So, what can a liberal democracy, to defend against the coordinated attacks, which started with Moscow?

The first step assumes that Western democratic countries should start to treat the threat posed to them a new, secret form of war, more serious than they used to. Particularly revealing example of shameful complacency in this context, look us lawmakers-Republicans, posing as “hawks” in matters of national security, but ignoring the scale of intervention by foreign powers in last year’s presidential election.

However, other countries are close to this left. For example, in Germany, few people know that the servers of the Bundestag has already been hacked and in anticipation of the upcoming national elections this fall, the country can also wait the information “leaks”. Partly it is because of this ignorance attempts to strengthen the German cyber defence is advancing very slowly.

The second step is to close all the legitimate channels through which foreign powers can influence Western policies. The United States long has stringent laws prohibiting foreigners to give money to American parties and candidates. For example, I while this month has not received American citizenship, had no right to donate to political campaigns.

It’s hard to believe, but in European countries such as Germany and France, such laws are not. As a result, Russia on a legal basis may provide financial support to local populists — left and right, is ready to cooperate with it. To close this loophole, requires only political will, but so far it has not been shown.

As a third step, we must recognize that to successfully confront the new forms of misinformation we need to engage teachers and artists, and not just politicians and corporations. During the cold war, the countries of North America and Western Europe responded to abandoned liberal democracy ideological challenges of investing real money in civic education. They tried to explain to people the value of our political systems. Schools and universities understand that an important part of their mission is to educate citizens who understand political issues and ready to defend their freedom.

Now this understanding is eroded. Most schools and universities focus too much on preparing students for a successful career and because of that forgot about the larger goal of nurturing responsible citizens. Almost ten years ago pointed out Congressman Lee Hamilton (Lee Hamilton) and Supreme court justice Sandra day O’connor (Sandra Day O’connor), “civic education continues to decline due to the increased importance of final papers and exams because of the emphasis that the school reforms in literacy and mathematics. Too many young people now simply do not understand how our political system.”

The fourth is associated with the third — step demands from writers and scientists to rethink their role in society. Us has long liked to consider themselves as critical intellectuals, whose main task is to specify the surrounding of injustice and deconstruct the foundational narratives of Enlightenment values and the genius of the founding Fathers. Of course, the criticism remains an important thing. Makes no sense to deny that the reality of liberal democracies in different countries of the world are often not consistent with enlightened values that underpin liberal-democratic polity. However, in our dangerous time writers and intellectuals no longer have the right to surrender pseudoradicular the posturing and limit criticism of global injustice. On the contrary a real intellectual courage requires us to look up words, able to explain why liberal democracy deserves and how to correct its shortcomings.

This is not the first time the Kremlin is trying to destabilize Western democracy. In 1946, George Kennan (George Kennan) predicted in the “Long telegram” that Moscow will use the radical political parties for “pressure on the governments of the capitalist countries in the Soviet interests” and at the same time will deal “a merciless struggle” against the moderate leaders.

In those days, the moderate leaders believed that freedom needs to be protected and worked tirelessly to protect their country from Soviet encroachments. However, in addition, they were able to achieve even more important results. They provide their fellow citizens a tangible increase in living standards and hope for the future. In the postwar era, the economy grew rapidly, wide circles of the population enjoying the fruits of progress and people thought that very soon will be reached even greater prosperity. Due to this, the vast majority of citizens have developed a deep commitment to democratic institutions. In the end, organized by a Kremlin campaign of infiltration and misinformation were unsuccessful.
To prevent the next Kremlin’s attempts to undermine democracy, political leaders must be aware of the risks specific to the 21st century. However, even in this new era, it is extremely useful to study the old recipes for success. To protect our freedom we need to learn better to explain why liberal democracy is worth it to save her. In addition, we should also recognise that a more fair distribution of the fruits of economic growth is required not only for social justice but also for political stability.