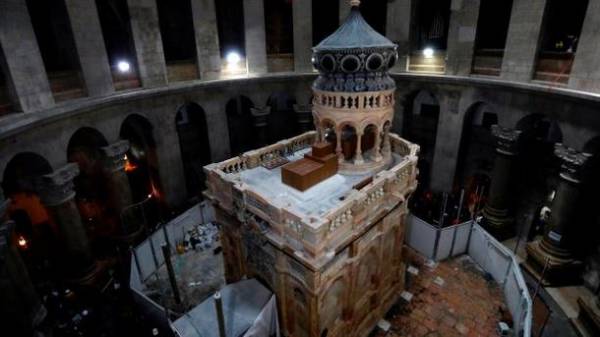 Scientists have completed the restoration work of the Holy Sepulcher in Jerusalem, and now, March 22, the scheduled opening of the chapel, reports the Associated Press.

It is noted that the Greek team of restorers completed the update of the Edicule. So, after the restoration of the disappeared metal cage, which was built around the temple in 1947 to strengthen the walls, no more black soot on the stone facade of the Church from the candles of the pilgrims

Recall, 27 Oct 2016 was raised marble slab that covered the tomb of Jesus Christ in the Church of the Holy Sepulchre in Jerusalem. It moved for the first time since 1555.

According to Christian belief, Jesus Christ’s body rested on a stone funerary Bed in the limestone cave after the crucifixion by the Romans in 30 or 33. The sepulchre is enclosed in the Edicule — the chapel dome of yellow-pink marble in the center of the Rotunda of the Church of the Resurrection with an area of six by eight metres. Because of the earthquake of 1927 preserved only part of the walls of the cave and the entrance, so outside you will also strengthen steel beams and ties.