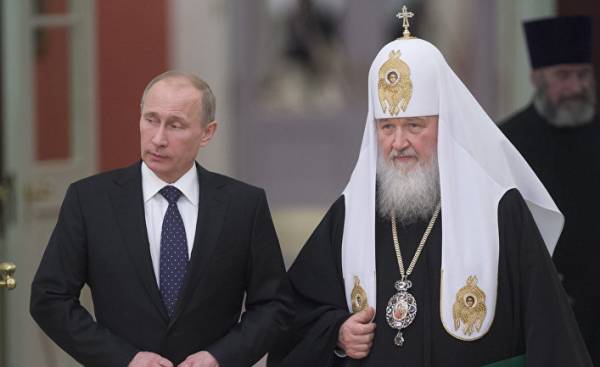 The Orthodox Church has strengthened its position in Russia today, but at the same time it is obliged to fully support the policy of Vladimir Putin.

“Putin uses the Church, but at the same time, it is important that the power of the Church as an independent institution has grown,” — said the researcher of the Moscow Carnegie Center Alexander Baunov.

Baunov believes that the Kremlin has succeeded in its goals. In his opinion, the Church has turned Putin’s Ministry of tradition, which makes religious diplomacy dictated by the government, and is responsible for international external rituals of the state.

According to Baunova, a good example of how the Orthodox Church has acted as the errand boy of the Russian leadership — a historic meeting between Patriarch Kirill and Pope Francis last year.

The initiative of the Patriarch of the Russian Orthodox Church and the Pope, it seems, belonged to Putin, who wanted to weaken Russia’s isolation from the Western world.

For the Patriarch, this meeting was a losing move. In the religious circles of the country, an unexpected convergence of religions, warring with each other for a thousand years, was not approved.

According to Baunova, support of Patriarch Kirill believers in Russia fell.

The place of the Church out of politics

“In practice, the Patriarch fully supports the policy of President Putin,” — said Filatov.

He recalled that because of the immaturity of civil society, the Church in Russia plays quite a big role.

The weak position of trade unions and the lack of real political parties leave the Church the opportunity to act and increase their influence out of politics.

The Church demands the return of his property

As payment for the support of the political leadership, the Church hopes to get back the property, which in Soviet times she took.

On the other hand, the return of property in Russia caused a wave of protests. This topic covers the dispute about the affiliation of St. Isaac’s Cathedral in St. Petersburg.

The Governor of St. Petersburg Georgy Poltavchenko in January, has promised that, under the current Museum Isaac will be transferred to the Church.

This caused in St. Petersburg indignation. In the Northern capital, held demonstrations, which require you to reconsider this decision.

The Kremlin, in turn, washed his hands and put the responsibility on the Governor Poltavchenko.

However, the Church hopes not only to return property, but the return of religious values.

The Orthodox Church is promoting in schools, religious education and Church history. It also seeks to strengthen its position in the army, hospitals and prisons.

Researcher at the Carnegie Center Alexander Baunov is predicting the Orthodox Church a speedy victory in the Russian society, which was secularized during the Soviet era. He recalls that Church services regularly visit only 2% of the population of Russia.

Using religion the President is looking for supporters

President Putin now emphasizes religious virtues, and gives to understand that Russian thinking is based on Orthodoxy.

Explorer Alexander Baunov believes the increasing role of the Orthodox way to draw the attention of pensioners and uneducated segments of the population.

Putin began to look for new supporters with conservative values once in 2011-2012 the liberal residents of major cities spoke out against Putin and carried out demonstrations.