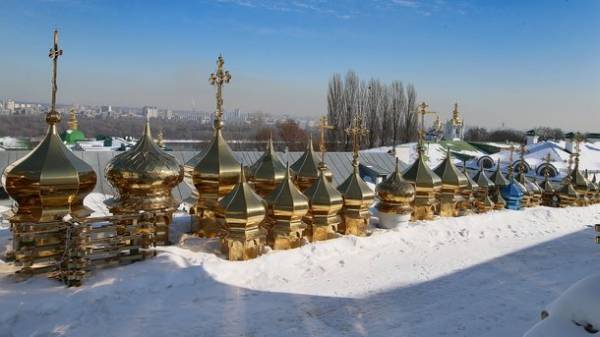 Orthodox churches and cathedrals, not in vain is considered one of the most beautiful in the world because of the two differences from the temples of other religions: they have Golden domes and bell-ringing, which is not anywhere else. As he sang Vladimir Vysotsky, who was a frequent visitor to Kiev, the domes we have croutes pure gold, “so often the Lord noticed”. This applies both to the world famous temples of Kiev-Pechersk, Pochayiv, Svyatogorsk laurels, and small churches in towns and villages. “Today,” visited the Studio where they make large and small Church “domes” and found out that you need for a melodic bell chime.

We are in the room, where are the blanks for future domes, gold leaf, steel pipe, rods, which in skilled hands of masters a couple of weeks can turn into a graceful finial of the Church. As it turned out, classical copper domes gilt now a little book — very expensive. Glittering gold in the sun domes of the Church now made of stainless steel sheets, coated with titanium nitride, which are called “Bulat”.

Capture the procurement masters are not allowed, they say, bad luck can happen in the marriage. But it looks like the inside of the finished dome, showed us. Cutting of thin sheets of steel multiround artfully assembled on the frame-the cage that is welded to the Central tube passing through the whole dome. Top it is inserted into a steel cross, covered with sheets of steel.

“The real master is the one with the dome turns smoothly, without corners and sharp transitions, says kapolsek Michael, a tall, blond bearded man in his forties with a strong hand. — We make a dome for 8 years. Long time looking for a lost technology of the old masters, but has its own know-how, such as the seam connecting the petals of the dome. Under such a joint will not leak rain water. Guarantee that the dome will last at least 70 years.”

But before, as say, the dome was done on wooden pieces, but the tree for so many years will not stand, even if his handle means against rotting and fungus. 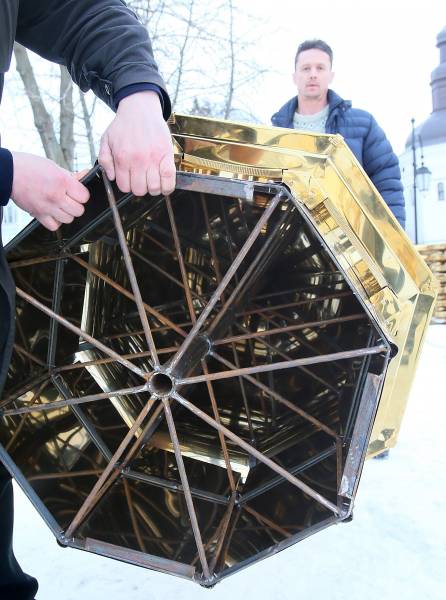 From the inside out. The frame will allow the dome to stand for at least 70 years 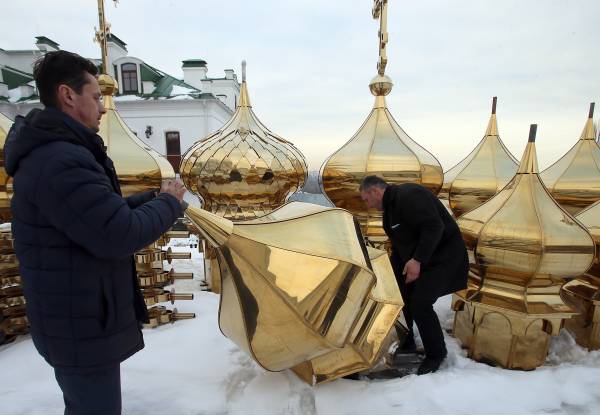 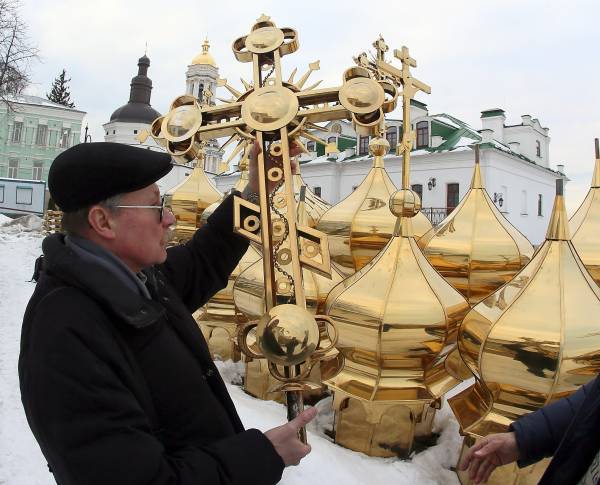 A symbol of faith. Such a cross is called “trilobal”

In addition to classic domes, consisting of 6-8 parts of the master also do more complex scales. They look nice, but are much more expensive (20-30 thousand UAH and more, depending on the diameter) and weigh a lot more. If the most popular with customers “bulb” with a diameter of 1 m weighs 20-22 kg, still the same, but assembled from hundreds of diamond-scales pull on 117 to 120 kg. 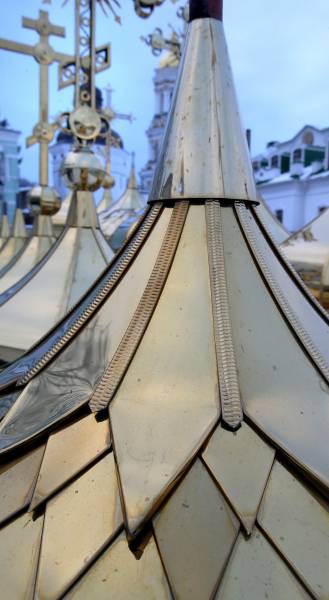 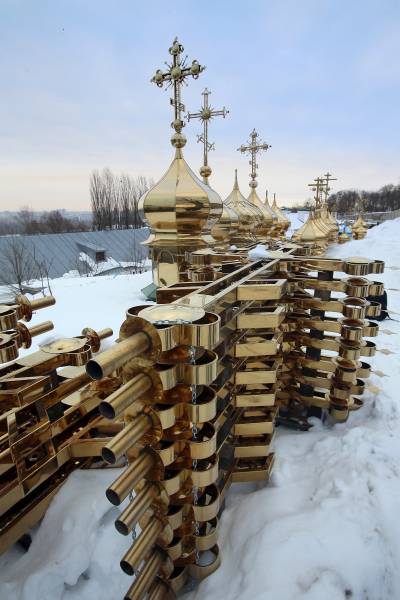 Insurance. The chain on the crosses of the thieves will not be superfluous

THE IDEA WAS INSPIRED BY THE BELL

Went from tradition to ring the bell and why the temples were topped with domes, we told the superior of the Kyiv-Pechersk Lavra Metropolitan Paul: “According to legend, St. Ambrose of Milan, who lived in the fourth century of our era, saw a wonderful dream: he goes on the field, strewn with flowers, and see the bluebells bend over and make enchanting sounds. Waking up, Ambrose commanded the masters to make a bell flower shape to attach to it a “language” and began to call. The sound of bells calling people to prayer, reminds us of one thing: on divine love and divine mercy that man must meet his Maker. Installation of the dome symbolizes the residual completion of the temple, and he is crowned with a cross, testifying that the temple of God and it is prayer. The cross is the symbol of our salvation, and under him the people are protected by God’s grace, and have the opportunity to pray.” 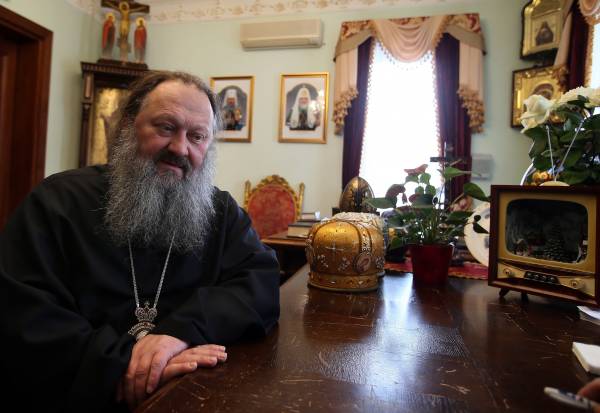 Below the finial of the temple could look good, there are canons of the manufacturing domes.

“It is wrong to make the cross higher and larger in scale than the dome itself, their ratio should be approximately the same, told us of master Alexander. — If you distort the proportions of the dome, for example, is too high to make the “skirt” (as slang masters referred to as the lower, rounded part of the product. — Ed.) or too stretched in the width of the “barrel” (the upper part of the dome. — Ed.) bottom dome will look like a squat, flattened. Crosses up to 1.5 meters in span can be set without cables-stretch marks, holding them in a strong wind, but for larger have additional fixing, otherwise, the cross could fall from-for a strong wind along with the dome.”

According to Alexander, it is technically possible to make a “bulb” of any size, but in practice it is limited by the height of highway overpasses — 4 M. the Dome more than 3 m in diameter and the same height of the domes, are loaded on the trailer, do not pass under the bridges, so they are transported in parts. A few years ago Michael and Alexander were the case, when the firm booked a dome with a diameter of 6 m. It was transported disassembled and directly next to the Church gathered a huge design of six petals. Then tap the dome was set in place. And the little “bulbs” are 30 cm in diameter, they are ordered to chapels. Among the many ready-made domes, one particularly attracted the attention of an unusual bright blue color.

“This so-called mother of God — for the churches in honor of the blessed virgin, her colors blue and light blue. Blue is obtained if the stainless steel coating nitride, and titanium oxide,” explained Michael. 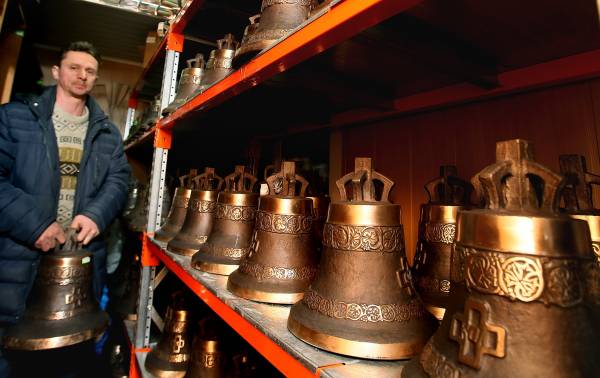 Do, re, mi… less Than a bell weight and size, the higher the sound and Vice versa 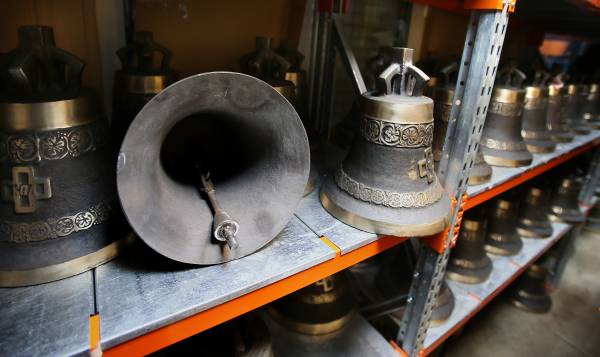 The tongue and ears. Bell beater made from steel, and hang for 4 lug RINGERS WORK WITH MY HANDS AND FEET

In the Church shop of the Kyiv-Pechersk Lavra, we saw the bell from 7 to 250 kg. Trying to raise a small “bell” with a height of 40 centimeters, and hardly tear it from the shelf.

“It’s not easy? But this is just the average of the bell, the so-called Pozsony, which is used as an auxiliary, weighing 38 kg, — the seller smiles Alexander. A cubic inch of bronze weighs 8.6 g, she is almost 9 times heavier than water. Therefore, given the modest size of the bell is massive. But the sound! There are still small bells with high tones. The main bell — evangelists — they are the heaviest, between 100 kg or more, and “voice” them basses”.

Together with the seller we barely budged this bell, but it “growth” just above the knee and only half a meter in diameter. And the Evangelist height in human growth weighs about three tons. By the way, Ukraine’s largest bell was installed in 2008 in the bell tower of Holy Transfiguration Cathedral in Odessa. The giant weighs 14.2 tons, and his language is 250 kg. the largest bell of Kiev Pechersk Lavra on the main bell tower pulled 13 tons, and its “voice” heard for 10-15 km around. 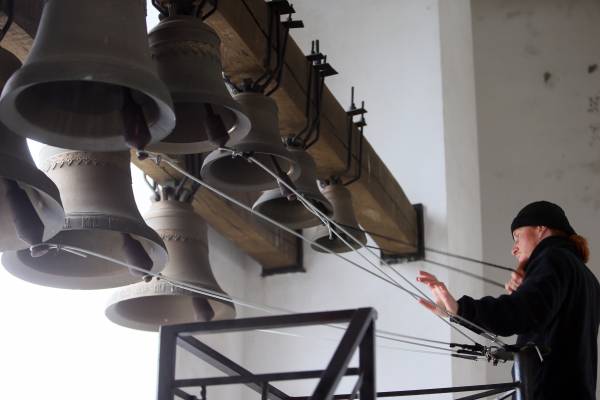 NICE, BUT EXPENSIVE. Church bells is an integral part of Orthodox worship, requiring not only the skill of the ringers, but also expensive, since even a minimal set of five high-quality bells, giving the jingle, costs about 70 thousand UAH, without delivery and installation. The average price of $12-13 per kilo of weight, you can find cheaper, but, according to experts, these bells can be a bad sound because there is less than it should be, expensive more cheap tin and copper. A classic recipe of bell bronze — 78-80% copper and 20-22% tin.

“Small selection, which can produce all the required the Charter of the Church bells, of the bells weight is 7 kg (salt sharp, 3rd octave), 18 kg (mi 3rd octave), 25 kg (si 2nd octave), 42 kg (La 2nd octave) and 100 kg (mi 2nd octave) — the Director of one of the firms specializing in casting bells, Mr Anisin. They picked up on the basic colors and harmonious sound in the chord”.

CRIMSON RING. As we told the bell-ringer of the Kiev Church of St. Michael, father Andrew, Church bell ringing is divided into two main types: the bells and ringing.

“Blagovest — dimensional strikes the large bell that called the faithful to worship, says father Andrew. — He is called so because the good is proclaimed the good news of the beginning of the service. Also, in case of trouble, he beat the alarm by frequent strikes. Peal — a three-fold break with the ringing of all the bells, expressing Christian joy, celebration. Chime — repeated chime into each bell one at a time or several blows, starting with large and small companies. Finally, bust — a slow ringing into each bell once, but, on the contrary, from small to largest, then hit all the bells together at once, and so I repeat many times.”

According to father Andrei, the ringer can be not only a monk or a priest, but he must be a believer and have an ear for music. When, for example, Easter ringing of the large temple, where bells 12 or more, then they beat not one, but several ringers, and work not only with two hands, but also feet pressing on the pedals. On the bell tower make a special remote where converges many cords and ropes.

Guide to the filming locations of “Game of thrones”