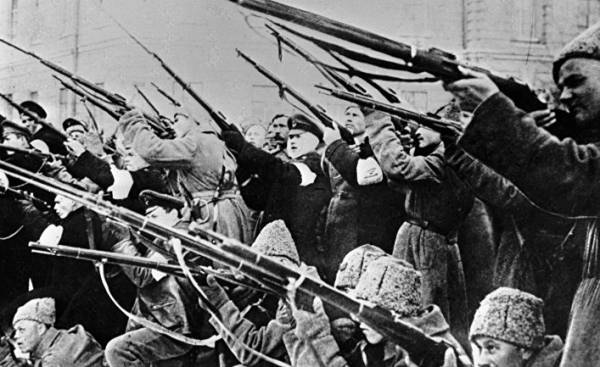 Last week marked 100 years since the day that the Romanov dynasty had ceased to rule Russia after almost three centuries in power. These events could be purely domestic in nature—, provided that at all possible to talk about any internal Affairs of ordinary country in the whole continent, which is Russia — if not for the abdication of Tsar Nicholas II (March 15), which became the historical harbinger of endless whirlpool. Already the revolution took place on 23 February, a raging insurgency, whose members — as it is logical to assume in a country of nobles and serfs — was intended to make everyone equal citizens. But history was not enough. Pala Royal power, and a few months later occurred the October revolution, radically changed the world. To associate the revolution with the names of months can be useful as a reminder of how intoxicating to us, a confluence of social and historical circumstances. Want another example? It would seem, in 1991 — the dissolution of the USSR — was only yesterday, and we calmly look back on decades of communism.

Last week in Le Monde I read an article stating that the Russian President ordered to arrange celebrations in honor of the Romanovs (Tsar Nicholas II, his wife and children were murdered in July 1918). Vladimir Putin takes the old Russia, Imperial and Orthodox, without abandoning the Communist Russia, during which he, the KGB, lived. Starting with Ivan IV, before the Romanovs, Catherine II and ending with the Bolshevik Vladimir Ilyich Lenin — all the same struggle! The majority of a century marked by these great historical figures, in the interests of Russia. Yes, and our too — when you consider the greatness that Russia has for many centuries preserved in the world and especially in Europe.

Meanwhile, 1917 stands out here is so that, in speaking of him, we always put it in quotation marks: “1917”, that special year. The most incredible ideas and tragic events. 1917 is a worthy heir of Ivan the terrible and Catherine the great. The rampant barbarism and lies. It is possible to tell the same thing about the Empress Catherine (who ruled from 1762 to 1796). When she traveled around the country, governors hastily erected sham villages and were driven to the peasants that greeted her on the roads to show how modern Russia was. Manipulation of statistics of the Soviet five-year plans may have been just a tribute to tradition…

However, in today’s Russia, blinded by the cynicism of Vladimir Putin, there is a private initiative, proof of which are some cases the celebration of the centennial anniversary. In the country, which today managed to earn himself the best reputation due to excessive activity on the Internet — thanks to the work of Putin’s spies and the infamous Edward Snowden — also have an independent website that tells us about the past era (in Russian and English). It’s called “1917: a free story.”

Historians, journalists and ordinary netizens placed here, sometimes in the form of tweets, testimonies of thousands of characters who lived in that era — the information taken from documents and Newspapers of vrasene. Le Monde quotes one wonderful quote that pertains to Maxim Gorky, writer the companion of the Bolshevik party, (overwhelmed with doubt) a member of the revolution: “I would Like to tell us something joyful, no nothing!”

Then Moscow became the capital of the Comintern and tried (and often only pretended) to export 1917. And he has survived three wars (the end of the First world war, Second world war and the cold war), has become a date that marked our life, whether we like it or not. We, the Portuguese, must also be personal stories that we are special, only we tend intonation could say “1917”. It is not necessarily about this particular year or near to it decade (the famous reporter Reinaldo Ferreira (Reinaldo Ferreira) claimed that in 1925 he traveled to Russia, although in reality it is not). However, the consequences of this historic earthquake and tsunami, reached these limits, deserve many interesting stories. Our historical lack of taste and the desire to appeal to the memories and the literature, direct evidence should add here one particular fact: our Communists, people who were dealing with the legacy of 1917, was raised in the underground. What a sad loss — a reluctance to talk about those events in a more detailed and complete form.

There is one French book in the noble sense of the word (of those that teach us to enjoy reading). Fortunately, its volume is more than 700 pages, and it’s called “the incorrigible optimists Club” (Club des Incorrigibles Optimiste) Jean-Michel of Genessee. This novel in 2009, won the Prix Goncourt of high school students, a small analogue of the famous literary award, created to attract young people to the literature. It tells the story of a boy living in Paris, the most cosmopolitan city of the era, in the late 1950’s — early 60-ies, when the tsunami that began in 1917, has finally lost its power.

Members of the club of incorrigible optimists gathered in the back room of a cafe in the square Denfert-Rochereau, where he played chess and were the talk of the world, especially those countries where each of them ran. It was the poles, Hungarians, Czechs, Russians, one Greek — all former Communists, Paul, Sasha, Leonid, Igor, or Imre, immigrants who illegally came here for ideological reasons. They believed, and their faith followed them closely.

The life of each one of them has gone downhill. As for his personal life… they All suspected that it exists, but has persisted, in order not to contradict themselves in that they lived for something else. Optimists — because it’s impossible to deny his own life, incorrigible — because there was nothing he could fix. A terrible lesson, because that’s life. French boy, the narrator, lived next door with this story.

A few years later — a novel beyond time square Denfert-Rochereau square witnessed red flags may 1968. It was the death rattle of 1917 — and the main characters, incorrigible optimist, would not have been hiding in the back of the cafe. Oddly enough, those, may, quickly became pessimists.