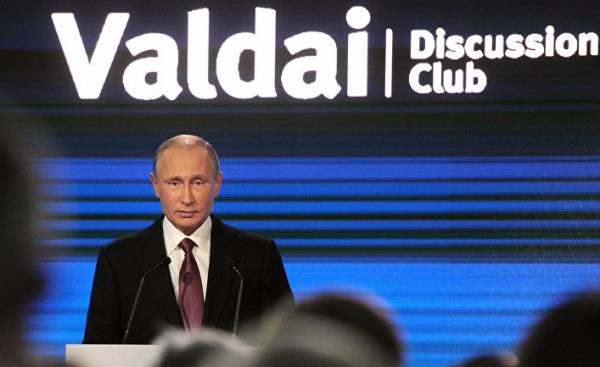 “In a world of many places where conflicts and wars last for millenia. But the middle East is indisputable, stands out even in General, very disturbing background. It is difficult to find regions with such long-standing conflicts and with a long tradition of participation of countless players of different calibre, from small, almost marginal groups to the strongest world powers. So began his speech Andrey Bystritsky, a Russian scientist and the Chairman of the discussion club “Valdai”, which ended in Moscow. The theme of the conference: “the middle East: when tomorrow comes?” This question reflects the scale of the problem, which is one year after the completion of the previous conference, the discussion club “Valdai” has undergone significant transformation, primarily in regard to the international situation. Changed the balance of power in the region and the world, and the basic rules of the international game. According to the Russian scientist, we must admit that “nothing desorientiert when a reputable scientist suddenly admits that he is not only unable to describe what’s happening in the world, but even about himself and his convictions he says is uncertain and inconsistent whisper”.

Valday is the name of the lake in the Novgorod region, which in 2004 was held the first conference of the club. The club bears the name of the lake is no coincidence. It was chosen not to use the terms of the ideology which dominated Russia for a century. For the sixth time “Valdai” took a middle East conference, the sponsors of which are the largest Russian banks. They Fund and some other forums, such as “Eurasia”, “Euro-Atlantic”, “World revolution”. Especially promising that the conference does not answer the questions and put them. This marks a radical change in Russian scientific thought, which in the last century suffered from the so-called “ideological vacuum”.

The opening session at the Moscow conference — “the Changing global order and the middle East.” It was made by the Deputy Minister of foreign Affairs Mikhail Bogdanov, one of the most active of the Russian diplomats in the region, as well as two well-known Arab journalist: Ragida Dergham (Lebanon) and Jamal Khashoggi (Saudi Arabia). In addition to them, the words took Shaukat Aziz (former Prime Minister of Pakistan), former Israeli defense Minister Moshe ya’alon. Participation in the conference was also attended by scientists from Abu Dhabi, Teheran, Ankara and Washington. The conference focused on international conflicts, international terrorism, refugee flows, as well as contemporary political and socio-economic problems in some countries of the West, burdened with feelings of insecurity and powerlessness. In these countries, exacerbated the frustration in the “old” elites, which, in the opinion of many, lost touch with reality. At the same time unhappy and the new “elites” those who are just trying to find his place.

“Valdai” does not follow recent changes in the relationship of Putin and trump, he is trying to identify those changes that affect their position on a particular issue. While LIH (banned in Russia — approx. ed.) is not considered as the most important issue. To understand what is happening in the region “need to see a tangle of problems, to build a kind of a multidimensional matrix to see the diversity of relationships between phenomena”. One of the main conclusions of the conference — all that is happening in the region is somehow related to global social processes.

At the Valdai club discussed the problems of Syria and Iraq, Yemen and Libya, the region’s economy and even possible problems in relations between Iran and Saudi Arabia, which “mainly control the agenda in the region.” Was heard of the proposal present at the conference of politicians, among them AMR Moussa (former Secretary General of the League of Arab States), Ali Nasser Mohammed (former President of South Yemen), Abdullah al-Dardari (former Prime Minister of Syria), Nabil Fahmy (former Minister of foreign Affairs of Egypt), Ismail Walad Al-Sheikh Ahmad (UN envoy in Yemen).

Arab proverb says: “If Mohammed cannot go to the mountain, then the mountain must come to Mohammed”. Also the club “Valdai” in the beginning of the month moved from Moscow to the capital of Armenia — Yerevan, a week earlier session was held in London. The names, locations and context of the events changed, remains unchanged idea. In Yerevan the topic of discussion was “Time for change: peace in a time of global unpredictability”, and in London — “Global rebellion and the global order”.

26 years of free trade: the gains and losses of Ukraine