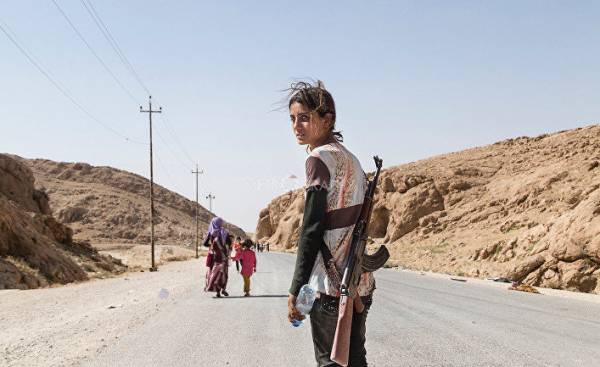 Baghdad — After in a Christian town near Mosul was an armed conflict, activists have accused the forces of “forces of the people’s mobilization” (coalition of Shiite, Yazidi and Christian militias fighting on the side of the Iraqi government against ISIS banned in Russia — approx. ed.) of inciting hatred between Christians by supporting the warring factions.

Christian activist Khait Allegedly said that “the conflict erupted in the town of Bakhdida South of Mosul between two groups of Christians. The training and weapons provided the management of “the people’s mobilization.” This conflict led to the arrest of one of the commanders of grouping “hawks of Assyria” (armed group representing the interests of the Assyrian communities in Iraq’s Nineveh province — approx. ed.), Salvan Maurici.

He added that the struggle for influence in the Christian areas has reached the limit. Group “Babylon” led by Ryan Kaldani and with the support of the “people’s mobilization Forces” attacked the headquarters of the party “Assyrian Union”, was arrested commander of the faction “Assyrian hawks” Salvan Yumiko and took him away in an unknown direction (the Assyrians — the people, ascending to the ancient population of Asia, adopted Christianity in the first century — approx. ed.).

Meanwhile, a state of extreme discontent prevails in the city of Bakhdida on the background of constant conflict between the Christian factions who were trained and armed troops “forces of the people’s mobilization.”

Writer césar Hormuz appealed to the heads of the Christian churches to develop a common position in connection with this “confusion” that arose between the Christians of Iraq in light of recent events that led to the widespread use of weapons and kidnapping.

The comments in the media and in their social networks of Hormuz emphasizes that “the continuation of the policy of arms and ammunition will lead to the fact that the Iraqi Christians will have to wait for more serious consequences, beyond the harm of militants of the Islamic state”.

He noted that in the region of Nineveh daily formed new factions and armed Christian groups, including “Black Babylon”, “Babylon Troops”, “Troops of the Assyrian sons,” “the Assyrian hawks”. Hermus added that most of the members of these groups have been trained under the leadership of “the people’s mobilization” in the near camp Taji near Baghdad.

According to the blogger Haytham Hanna, you should take precautions in the issue of cooperation between Christian groups and the “Forces of the people’s mobilization.” He believes that, if they wanted the best for Christians, then coached them as a monolithic force, which would include all Christian denominations. However, they are armed and supported by only competing factions, between which there is no semblance of understanding or harmony.

In his comments on the page “Assyrian Council” in Facebook he noted that the preparation of these warring factions, intervention in favor of one or another party has a policy aimed at getting young people from the Christian groups become puppets in the hands of other people and means to implement plans and ideas by the “Forces of the people’s mobilization.”

Moreover, the Iraqi party, “the Assyrian democratic Union” put on “the forces of popular mobilization” responsible for the attack on headquarters and the arrest of a young barbaric leader of Salvan Maurici.

According to their statement, this kind of detention is a gross violation of human rights and unacceptable interference in the Affairs of the region. Representatives of the party expressed their grief and condemned this cowardly terrorist act which violates the rights and freedoms of the inhabitants of this ancient Assyrian city.

The party urged the Iraqi government to intervene and instruct the relevant authorities a concern about the release of the young leader, warning of the conspiracy, the purpose of which is to reach out to all Christians.

The leader “brigades of Babylon” Rian al-Kaldani close to the leadership “of the forces of national mobilization”, had previously opposed the Louis Raphael Sako, head of the Chaldean Catholic Church in Iraq. He accused him of politicizing the religion, and that all of his statements paid for.

The statements of al-Kaldani against the head of the Chaldean Church observers believe the beginning of a future feud between Christian religious leaders in Iraq and leaders of the Christian armed groups loyal to the “Forces of the people’s mobilization.”