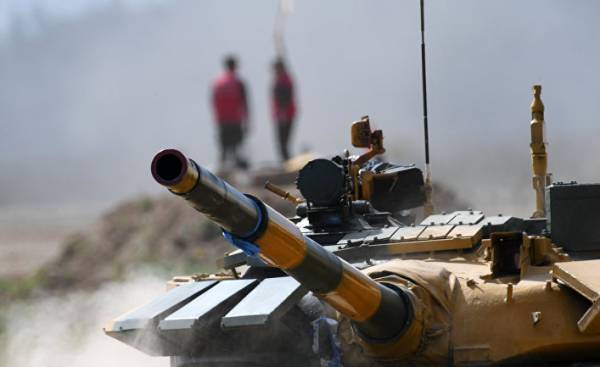 Over the dark blue curtain separating economy class from the officers ‘ cabin, lights inscription: “Buckle up!”. It is in vain. Rare aircraft Tupolev Tu-134 UBL modifications are not equipped with seat belts. Why? Aircraft with long, sharp nose is used for training crews of strategic bombers engaged in long-haul flights, and only sometimes on these flights carry passengers.

Tupolev takes off quickly and leaves the Moscow airport. The plane headed South, in the Astrakhan region, which in Russia is famous for its watermelons, fishing on the Volga and missile ranges. One of them, in Ashuluk, near the border with the Central Asian Kazakhstan, took place the final competitions of calculations anti-aircraft missile troops in the International military games.

Czech in the desert is not a foreigner

“There are aliens?” — asks a Russian officer with a dark brown skin, darkened from the scorching sun mercilessly burns the Astrakhan steppe and soldiers running around on her. “There is. I’m from the Czech Republic,” I said. “From The Czech Republic? Yes, what is abroad,” replied the major good-naturedly and laughed. “Yes, I’d like to look at old Europe. But they can’t service,” he explains and makes a face as if dreaming of a cold Czech beer. In the sun — more than 40 degrees.

Green minibus GROOVE 15 minute rides on the tarmac and stopped at the site. Despite the fact that it is located a few dozen kilometers from the nearest town, the stands gradually filled with people. Spectators arrived by special buses to see the live firing of anti-aircraft missile systems s-300 Russian-made.

On the horizon in the sky look launch containers with missiles. Nearby are barely visible vehicles with dual radars. High in the sky appear to be a target that simulates an enemy aircraft or ballistic missile, anti-aircraft missile calculations shall as soon as possible to detect and shoot down.

Rocket in the sky

“It’s hard work. The s-300 is a collective weapon and all depends on the coordination calculation,” said major-General Sergei Babakov, head of the anti-aircraft missile troops Russian air force.

For the title of best fighting crew anti-aircraft missile troops fought soldiers from Russia, Belarus, China and Kazakhstan. According to Babakova, to participate in the competition wanted and Iran, but in the end changed my mind. It’s likely that its armed forces were not ready to demonstrate their skills.

Tehran has a complex of s-300 for less than a year. After the epic, when Moscow first imposed an embargo on arms, and then to spite the United States it was cancelled, Iran received Russian anti-aircraft missile systems s-300 last fall. With their help, the Iranians, especially, want to protect their nuclear facilities.

The contest has started. Somewhere in the blue sky flying goal — a rocket. Suddenly above the starting container is shown a rocket. For half a second she remains hanging in the air. Then there is the flame of the engine, and the rocket flies swiftly to the goal. A minute later she disappears from sight, leaving a gray smoke at first, and then high above the hot ground there is a white stripe. After the first rocket allowed the following. And suddenly in the sky flies a cloud: the target is affected.

After a few cycles, the winner is already decided: Russia with great advantage around the competition.

“It was worth it. We came here all the way from Astrakhan to his own eyes to look at the rocket. It’s fantastic,” says Igor. He sits in the shade of the bleachers, drinking a brew and watching what is happening in the sky. “I take it as a show and especially don’t focus on the fact that it’s a weapon. But our army is by far the strongest in Europe,” said the spectator, which is about 40.

And again hellishly hot vans. On the way back to the airfield at them more closely. Colleagues did not panic and bought up all the watermelons, which were sold in a small tent on the ground. And only Belarusian journalists prefer dried fish.

With this additional cargo Tupolev detached from Astrakhan concrete runways and sent to Siberia. This time way longer. Melons and berries, folded into the back of the plane is to blame. Without landing, the aircraft can fly a maximum of two thousand kilometers, so we make a stop in the Ural city of Perm.

We sat in the dark and taxied to the most remote edge of the airfield. Sharp nose sprinkled with fine rain. Most of the passengers took advantage of a pause to smoke. A colleague from an unknown international Agency located under the wing and catching the signal sent pictures of anti-aircraft missiles to Moscow.

Tyumen, officially the oldest Russian city in Siberia and the purpose of our trip took us through a couple more hours. There was a calm. Night idyll provincial metropolis violated three dozen shaven young men. They stood at the intersection and was clearly looking for something fun. “Nothing to worry about. They are members of our Orthodox singing of the choir of the engineering forces”, very seriously said a local officer. Apparently, the good part.

Morning. In the distance over the green trees into the sky up orange flaming torch of the refinery. On the obstacle course with a water-filled ditch, improvised minefield and sandy embankments already prepared technique. At the head of each column is an armored personnel carrier with a flag of participant countries: Russia, Belarus, Uzbekistan and Armenia.

Competition engineering troops may seem awfully boring. On the ground explosions. Soldiers initially disarmed booby traps. Then when it comes to bridging systems, which suggest crossing over the obstacle. Armored bulldozer, Tarot, passing over the bridge and confidently compares with the ground-foot embankment. Then in the case entered the construction equipment, which is to “play Tetris” with logs, and after their laying asleep burning fire. Then all the equipment is built into the column heading.

Show everyone likes, and the audience loved it. “We are not local and came for my son who wanted to look at the competition,” the young mother shows the baby who clings to the stroller. He allegedly like explosions.

The first was again the Russian team. A fierce struggle broke out for the third place. Soldiers from Armenia have not coped with the grapple, and they were not able to put logs in the hole. Shortly before the finish they spared the team from Uzbekistan. For engineering troops from the Central Asian Republic it was an incredible success.

In honor of the winners was given a salvo of self-propelled howitzers. Finally it was the turn of an Orthodox choir. I must say that in uniform, its members looked far more peaceful than in civilian clothes.

“All the teams are adequately prepared. Competition has passed at high level, even despite the fact that we used the new Russian equipment, which is not at all of the participating countries. Foreign soldiers had to learn to manage it and to use it to perform tasks. Perhaps after using it here, in the future they will want to buy it,” said Yuri Stavitsky, head of engineering troops of Armed Forces of the Russian Federation.

Of Russia’s international Military games are not only non-traditional sports and entertainment for viewers, but also soft power, which Moscow wants to demonstrate, in particular, their weapons and their equipment. In a spectacular and special form Russia conducts test-drive for existing and future customers to the Russian military-industrial complex maintained its position in the global market.

At the airport was waiting for our Tu-134. We bought Souvenirs (could not resist just before the chips are made of reindeer meat) and flew to Moscow. Again we made an interim stop — this time in the industrial capital of the Urals Yekaterinburg. Gradually the setting sun reflected in the body of the aircraft. Tupolev slowly absorbed HL kerosene. Ahead was only darkness and the Russian capital.