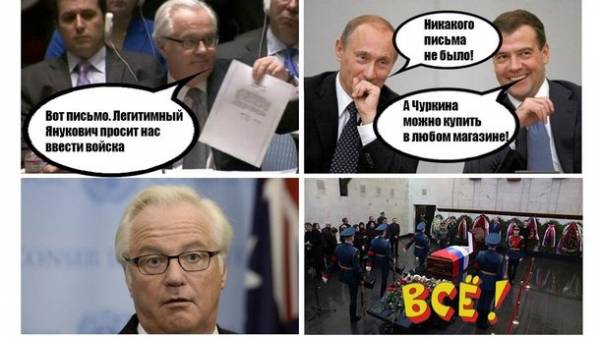 Users of social networks are actively discussing the statement of the press Secretary of Russian President Dmitry Peskov that the administration of the President of Russia has not received a letter to Yanukovych with a request to send troops to Ukraine.

The observation that the late permanent representative of Russia to UN Vitaly Churkin showed this document at a meeting of the UN security Council in March 2014, Peskov said: “this is something I can’t explain, I don’t know. I can say the situation de facto and de jure”.

See also: Why he died Churkin and that threatens Yanukovych: the expert explained the importance of the letter of troops in Ukraine

As reported, Churkin was appointed Russia’s Ambassador to the UN in April 2006. He died suddenly on 20 February 2017, the day before your 65th birthday.

Yesterday, March 16, at the Ministry of foreign Affairs of the Russian Federation said that the death of Russia’s permanent representative to the UN Vitaly Churkin came by natural causes. This was at the briefing in Moscow said the official speaker of the foreign Ministry of Russia Maria Zakharova.

Peskov called the cause of the murder Churkin. pic.twitter.com/FYW1rj2CYO

URGENT! Peskov acknowledged that Putin and Churkin lied about the letter to Yanukovych with a request to send troops to Ukraine pic.twitter.com/wUuItFSqqQ

We have never concealed that such a citizen.. as you say.. Churkin?.. Never had he in state structures did not work pic.twitter.com/cm4D4El6Q0

The Kremlin said that he had not received a letter of Yanukovych to send troops. This appeal Churkin read out at the UN

The most Churkin read at the UN.

Interestingly it turns out, February 20, dies Churkin, and 22 Yanukovych gives a great interview in which he declares that he has not asked Putin to send troops pic.twitter.com/W5h9Ofdqef

Churkin read out the appeal of Yanukovych to Putin, which Putin never got pic.twitter.com/gur7okh0Pl

Was the treatment of Yanuca to send troops or not?
And Churkin and Sands are known to be very honest people.
Don’t even know whom not to believe…

The incredible adventures Churkin at the UN pic.twitter.com/0T5ncycYLZ

Here you joked-joked that Churkin can be purchased at any px and here it is. The mustachioed Secretary Peskov confirmed it

They say that the letter Yanukovych Churkin received from Givi, one from Motorola and one from Eugene Zilina. Zilina and he was handed over to Viktor Yanukovych Junior.

Maria Zakharova at the briefing urged the media and the public not to speculate on the murder of Russia’s permanent envoy to the UN Churkin.

Putin, Churkin, Peskov and the Kremlin’s brethren use such a base lie that even somehow uncomfortable for them.

There was no letter. Let Churkin confirmed that it was. Yes, and Churkin was not. Where do you see Churkin? No Churkin! And no court no.

Of course, Churkin could ever answer, who let him read in the UN of a non-existent letter from Yanukovych. But… the heart…

WE did NOT HAVE ANY CHURKIN pic.twitter.com/FU47MW64Vn

In honor of the distinguished diplomat and patriot, I would call sudden death from unknown causes of the high officials of syndrome Churkin.

We will remind, on a press-conferences in Rostov-on-don in November 2016 Yanukovych confirmed the fact of appeal to Vladimir Putin about Russian troops in Ukraine and called it an emotional decision.

March 4, 2014 at an extraordinary meeting of the UN security Council, Churkin said that Yanukovych had sent a written request to Putin to use Russian armed forces “to protect the population of Ukraine”. “…appeal to the President of Russia Vladimir Vladimirovich Putin to use the armed forces of the Russian Federation to restore legality, peace, law and order, stability and protection of the population of Ukraine. Victor Yanukovych. March 1, 2014”, – quoted Churkin a letter of Yanukovych. “Russia’s actions in Ukraine entirely appropriate and legitimate,” – said Churkin.

March 9, 2017, the General Prosecutor of Ukraine Yury Lutsenko unveiled received from the Prosecutor General’s office letter, which says that neither the administration of the President of the Russian Federation, nor the Federation Council had not received any complaints of Yanukovych on the use of Russian troops on the territory of Ukraine. Also in the Prosecutor General’s office claimed that any statements Yanukovych was not the reason for the appeal of Putin to the Federation Council for permission to use Russian troops in Ukraine.

March 14 at the briefing in the Kremlin, Putin’s press Secretary promised to find out about the letter of Yanukovych. “Tomorrow we will come back to this. If early, I will report”, – said Peskov.

15 Mar Sands for the third time were undecided about the letter from Yanukovich to Putin. “You got me right, still failed (to find out about the letter). I confess, I’ll find out” he said and promised on March 16 to answer this question.