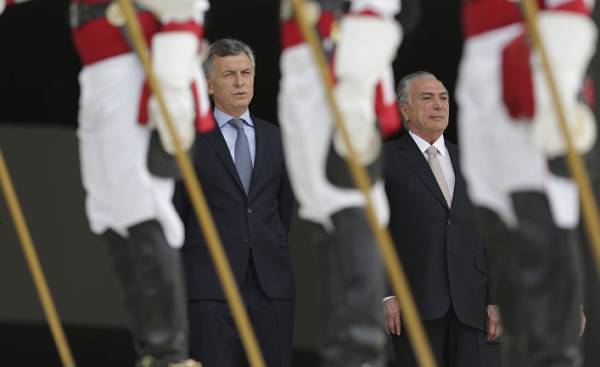 Countries to which still stands the alternative — for example, Ecuador, where a second round of elections — do not need to look into your past and compare it with the present. A glance at the disaster that caused the government Mauricio Macri and Michel Temer, to assess the risks of the restoration of the neoliberal model. Remember the worst crisis in the history of Argentina, which erupted in the beginning of this century, when the neo-liberal model shattered, and a brilliant reconstruction of the country, conducted by Nestor and Cristina Kirchner, contrary to neoliberal prescriptions. To remember what was Brazil, the most unequal country in the most unequal continent in the world, before it began to control Lula and Dilma, and huge successes when they’ve made the country.

Meanwhile, at present, neither Argentina nor Brazil can not boast of any positive economic indicator. In these countries everything happens exactly the opposite, including in the social plan, although came to power, the government promised quick and positive results. In both countries there has been a sharp decline in the same areas because they are pursuing a similar economic policy based on austerity and cuts in funding.

The light again pulled the hackneyed thesis that the problem is in too high state expenditures. On the basis of such incorrect diagnosis can only be made incorrect action.

They had to diagnose a deep economic crisis, which was not. But he needed them to re-appear as saviors, offering an exit from the disastrous situation caused by excessive public spending. In Argentina Macri from the beginning of his reign, pursued a blatant policy in the interests of the rich. The tariffs for water, electricity and gas rose more than 400%. The cost of transport has doubled. Speaking about the need to reduce public spending, they reduced the tax rate on the rich under the pretext that in this way stimulates the flow of investment that never do. But this is not confirmed by reality.

Similarly, in Brazil the government acts in the interests of the banks, reinforcing the economic recession and unemployment, freezing resources on social policy, but continuing to grant privileges to financial capital in the payment of debts to the state.

In both countries, is not observed the slightest signs of recovery in economic growth as the only policy of these governments is to reduce costs, which in any country in the world has led to the recovery of economic growth. On the contrary.

Therefore, social movements in Latin America made manifest with the eloquent title: “the People of Ecuador, Ecuadorian’t choose Makri or Temer!”. Unlike some intellectuals of Ecuador or other Latin American countries, these movements are not against alternative versions of the second round of elections in Ecuador.

Analyzing the consequences of the change of government in Argentina and Brazil, they say: Dear people of Ecuador don’t get caught in the trap of choosing the banker, as I don’t have time to repent. Political error will have to pay their labor. These movements no doubt support the candidate Lenin Moreno (Lenin Moreno), not to allow a repeat in Ecuador of the ills caused by neoliberal conservation in Argentina and Brazil, and to stop once and for all the right-wing offensive on the continent.