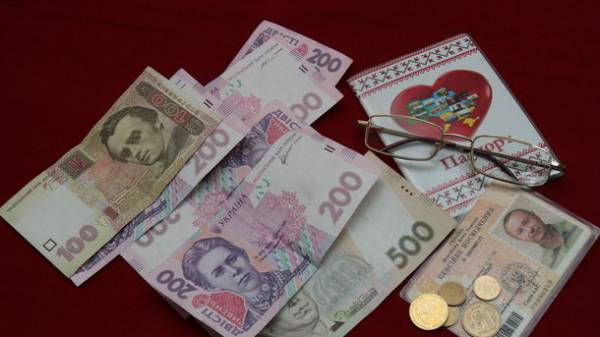 2018 must earn a second level of pension provision — introduction of personal savings accounts of employees. This issue seriously attended as the deputies of the profile Committee of the Verkhovna Rada and the Cabinet of Ministers, presented yesterday the project of pension reform.

I HAVE. As told during presentations of Analytical research center “Institute of Gorshenin” the Deputy head of the Verkhovna Rada Committee on economic policy Yuri Soloviev, today, of the nearly 12 million pensioners receiving pension through the solidarity system (common pot), 78% have a pension up to 2 thousand UAH a month, 17% — 2-4 thousand, and only 3% — more than 4 thousand UAH. Their incretory touches, but if it does not start, then future retirees payments will be even less.

“When one solidary system of pension in relation to wages, which paid contributions in Pensfond, will continue to decline due to demographic pressure (population ages. — Ed.) says the Nightingale. The 10 workers have 11 seniors, and a few years will be 13-15, which in turn deprives workers and employers the incentive to pay the single social contribution (ERU) and the legalization of wages, as pensions will still be miserable. Therefore, the introduction of a system of personal savings is necessary. Moreover, it is “long” (in contrast to short-term deposits) the money that will work for the economy.”

WHAT’S ON OFFER. So from January 2018 an additional 2% of salary employee employer will be transferred to his personal Pinscher. Each year for five years, employer contributions will increase by 1% (in 2019 — 3%, in 2020 — 4%, etc.) until they reach 7%. Such payments will be mandatory for those who are less than 35 years. And for senior citizens voluntary. Upon reaching the retirement age of the employees is to receive a monthly sum equal parts previously accumulated (only expected that the pension will be 60% of the joint system, and 30% personal and 10% from non-state pensato). If the pensioner dies, then the rest on his own pescato money to be inherited (under the solidarity system paid two pensions for burial. — Ed.). It is also envisaged that in severe disease the entire amount or part of it can be spent on treatment, but, of course, possiblity will then be less.

As explained by Vice-Premier of the Cabinet of Ministers Pavlo Rozenko, to increase the current ERUs (22%) do not plan, as the tax on income of natural persons (18%). Revenues in the newly created Cumulative pensfond (NPF) will go due to cuts in revenue to the joint system, reduce employers tax on profit transfers and other revenues of the state budget. It is expected that they will continue to grow and over the years 2018-2028 reached 420 billion. To protect against inflation savings offer to invest in bonds of domestic Treasury bonds (t-bills), promising returns of at least inflation in the current year.

WHAT TO DO. So as the second level began to work, the deputies it is necessary to cancel norm of the law “On compulsory openstreamonfile”, providing for its introduction only when a balanced budget. According to Rozenko, the agreement with the IMF about it finally achieved.

“Not the deficit grew PF, it is necessary to reduce the income tax by amending the Tax code, and due to this increase of the SST, where the money goes in PF, believes independent panexpert Viktor Kolbun (ex-Deputy head of PF). — With regard to the insertion of money from the Fund in government securities, this measure is temporary, for it is impossible indefinitely to issue bonds. But the plus of this idea is that it will reduce inflation, because to provide 13-15% per annum on government bonds difficult, so the government will become tougher to control the growth of prices.”

Other experts doubt that the authorities will have time to run the plan. “You need at least a year and a half: in addition to changing existing laws, it is necessary to develop a lot of secondary legislation: regulation on NPF, monitoring of collected funds on pensketch, etc.” — said CEO of the Ukrainian Association of investment business Andrey Rybalchenko.