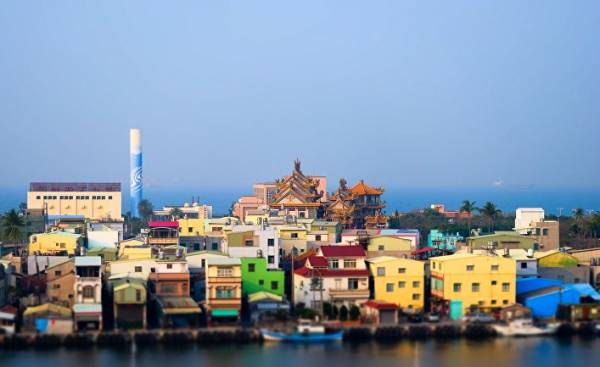 The majestic Buddhist temple of Zhang FEI in China today is in a great location on the banks of the Yangtze. But when this fine building was built during the song dynasty (960-1279 gg.), and then restored in 1870 at the same place after the flood, it looked completely different.

This temple in memory of the legendary warlord Zhang FEI, who lived in the turbulent times of the three kingdoms era, was originally built in Unane province, Chongqing, and he stood on a steep hill, leaving the facade to the river. The beauty of the temple had fully combined with the beautiful landscape of the area.

But in 2000, the temple was moved to 32 kilometers spent on this operation more than $ 12 million, as reported by state TV channel CCTV. During the construction of the Three gorges dam, which began in 1994, the temple moved to the foot of the mountain, Feifan.

The temple of Zhang FEI is not the only historical monument in China, which changed his place of residence. In recent years, the practice of disassembling inconveniently located historic buildings and their subsequent Assembly in another place has become a national tradition, and now the country has a branch, commit such engineering feats.

Some companies move the building to a new location on the tracks. Others completely dismantled their tiles to the Foundation, and then gather on a different continent.

Over the past half century, the Chinese landscape has completely changed. According to the National Bureau of statistics of this country, in the period from 1995 to 2015, the urban population in China increased from 352 to 771 million. Now there are 14 cities with a population of over five million people. Only in 2016, China has built a skyscraper 84, as indicated by the Council on tall buildings and urban habitat. Aggressive urbanization spread all over the country, and in the process have been lost, tens of thousands of historical sites. The transfer of the buildings was a preferable alternative to demolition, because the precedent already existed.

In 1964 the ancient Egyptian temples of Abu Simbel, the 3 stood for more than 200 years, were moved to 200 meters, so they were able to build the dam the Aswan dam.

This project paved the way for other countries, such as China, which began to alter the cultural landscape. About this CNN said the Professor, Hong Kong University of Hoyin Lee (Hoyin Lee), specializing in the preservation of architectural monuments. “The shift in Egypt has strengthened people thought that can do so. But we are talking about irreplaceable artifacts,” said Lee.

According to Li, China in a large scale started moving the monument “the Millennium”. In 2001, Assembly hall, jinlun southern metropolis of Guangzhou was one of China’s first buildings, which was fully transferred to the new location. This building, built in the 1700’s during the reign of the Qing dynasty, moved to 80.4 meters to pave the road connecting the Northern and southern districts of Liwan.

In 2003, the same fate befell the concert hall in Shanghai. This building Dating from the 1930s was removed, in its place to build an elevated road Anyang. First, the house is raised half a meter and set it on the sled with a length of 66.4 meters. Then it moved and lifted again to 1.88 meters, erecting under it a new Foundation.

Meanwhile, the warehouse in Wuzhou, Guangxi Zhuang Autonomous region, in 2014, got into the Guinness book of records as the hardest of displaced buildings. This six-story house in the Western style, designed and built in 1935 by the British architect George Wilson (George Wilson), had moved to 38 meters, to make room for new construction.

And in 2011, all the media started talking about the building of the fire Association Hankou Jun, built 100 years ago by volunteers from among the firefighters and is considered a historical monument of the city of Wuhan, Hubei province. This building was moved 90 metres along the rails.

The land on which it stood was bought by the developers, as reported by the China Association of Department of civil engineering. “China is experiencing a period of strong development, and on this background there are contradictions between the need to preserve historic buildings and to ensure economic growth, told CNN Professor at the faculty of architecture and urban planning of Guangzhou University tan Gaavah (Tang Guo-wah). — As a result we see not treated properly with buildings, demolishing them or moving to another place.”

One of the most dramatic projects of transfer of the buildings was carried out on two continents.

Yin Yu Tang, with its beautifully carved façade, and the magnificent reception rooms were typical of an ancestral home of a family of Chinese traders. But in the late 1990-ies the Peabody Museum in Essex moved him from Huizhou, Anhui province, who, to his in Massachusetts, a veritable logistical feat.

Nancy Berliner (Nancy Berliner), now working as a curator of Chinese art at the Museum of fine arts in Boston, came across a building Yin Yu Tang in 1996, when I worked in the Peabody Museum and studied at the Chinese national architecture and furniture.

“A neighbor opened my door and allowed to go,” she told CNN. It turned out that owning a house family wants to sell it. The Peabody Museum acquired the building for an undisclosed sum. “If the house is not moved to the Peabody Museum, it would probably dismantled and sold piecemeal, said Berliner. The tree and the bricks went to other local construction sites, and the carved decorative elements of wood could sell in antique shops as decoration. In some cases, the transfer of the building helps to preserve the historical heritage”.

Before “slowly and carefully to dismantle the house”, the experts did architectural drawings, shot sizes and all photographed — from the shingles on the roof to the Foundation stones. Then the details of the house Packed up and sent to the United States.

During disassembly tongue and groove joints between the wooden parts were found of the original legend characters as well as small charms and coins.

“The transfer of the building, Yin Yu Tang gave us a rare opportunity to literally dissect an architectural masterpiece, says Berliner. Very often we see only the surface of the building, but when you know this house, we were able to learn a lot about how it was built”.

As it stand the buildings?

“Before you raise a building, set the top and bottom platform (to support buildings) in order to package it and prepare for the movement, told CNN the founder of the Shanghai company on the transfer of the buildings Evolution Shift DOE Uji (Lan Wuji). — The movement is different. Sometimes the building smoothly move along the rails, and sometimes his pull mechanisms like trucks”.

Evolution Shift undertook a project on transfer of buildings such as the old British Embassy in Beijing (moved in the early 2000s) and now working in Agricultural and industrial Bank of China, which moved in 2008 to 50 meters below in its place to build an office building of vsekitajsky meeting of national representatives.

According to LAN, half of the building that carries his firm, are historical monuments. Before he established his own company in 2004, he oversaw the transfer of the Shanghai concert hall.

“The transfer has several advantages compared to demolition and reconstruction, told CNN’s lien. Is cheaper, the building is better preserved, less harm to the environment, and saves time.”

“Thanks to the rapid pace of urban construction, China has taken a leading place in the world for the transfer of the buildings,” he said, adding that the country has dozens of companies such as his own.

According to LAN, it is difficult to say how much is the transfer of a building, as costs can be very different. But the postponement of the concert hall in Shanghai, which weighs 5 650 tons, at a cost of 8.7 million dollars.

Most experts agree that the transfer is better than demolition, however, they note that the historic buildings are very often tied to their location.

The Murray house in Hong Kong, built in 1844 as a home for army officers was dismantled in 1982 and then moved to another place. Originally it stood in the heart of the financial district of the city, where today is the headquarters of the Bank of China. But it was dismantled and sent to the warehouse.

In 2002, the House of Murray officially opened the new location on the waterfront near Stanley. It is 15 kilometers from the former place. Now it is a shopping and entertainment complex.

“Centuries will pass and people will ask themselves the question: “Why this building is here?” says Hojin Lee. — No advantage in transferring there. It completely destroys the original intention of the builders”.

Berliner agree that the transfer is not always appropriate: “In any country where there is no choice but demolition, the historic monument transfer is definitely better than destruction. But ideally it is better to find other solutions to keep the monument in its original context.”

The pace of economic development in China start to slow down, and the process of urbanization as a result losing momentum. There are the first signs that are relevant to the conservation of historic buildings is changing.

They could be given legal status under Chinese law on the protection of historical and cultural heritage, where directly addresses the issue of transfer of “immovable cultural relics”. But this just isn’t happening.

However, in 2015, the government adopted a document entitled “Emergency notice on strict prohibition on the transfer of traditional buildings and the enforcement of the laws about theft of components”, which indicates a toughening of his position. “Emergency notification is not a law, but a clarification on the application of existing laws aimed at preventing illegal demolitions and theft of cultural heritage, what happens when entire buildings and their decorative elements bought by private collectors or foreign museums”, — said Lee.

This notification stricter rules on transfer of buildings in connection with the increase in damage to cultural relics. However, to implement this resolution on the ground will be difficult.

“As national monuments to protect and preserve them much easier, since it attracted the authorities’ attention. And the memorials to local scale decisions of local authorities,” explains Lee.

“The actions of local authorities for the protection of cultural heritage are regulated by the law on preservation of monuments, — says Chang Qing (Qing Chang), head of the Department of architecture in Tongji University. — Any transfer, any actions in respect of historic buildings in China will be strictly controlled, and such unfortunate cases will be less”.

But perhaps the loudest alarm about the impending changes were made in the end of 2016, when Chinese society of cultural relics and Architectural society of China has published a list of the architectural heritage of the country during the 20th century, which marked the 98 buildings in need of preservation.

This list was made iconic places such as the monument to the people’s heroes in Beijing, and buildings in Western style, like the Cathedral of St. Sophia in Northern Heilongjiang province. Buildings were selected on such criteria as their significance for Chinese history and architectural value.

This list does not provide legal protection of historic buildings, but it shows that the government is thinking of the architectural heritage.

In the last decade, experts have continually called for the protection of cultural heritage, and China is beginning to realize the value of its historical monuments, says tan. “There’s an old Chinese proverb: “Cultural relics restore in times of prosperity”. To restore cultural relics can be when there is money, he said. — When economic development has reached a certain level, people begin to look around and say, “What have we lost? Where is our story?”