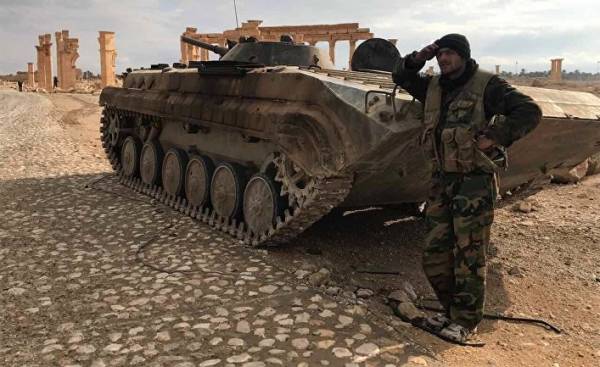 Palmyra occupies an important strategic position and is the intersection of all the major Syrian routes. Being located in the border triangle, which borders Syria, Iraq and Jordan, Palmyra is in the way of corridor leading to Northern Syria towards Aleppo, in the North-East of Syria in the city of Hasaka, and to the borders of Turkey. Palmyra is also an important economic area in connection with the presence of oil deposits in its vicinity. Its location determines the appearance of the line Deir ez Zor — Palmyra — Damascus: Palmyra is located across the desert on the road to HOMS and on the way to Damascus through the Eastern area of Kalamun.

The above circumstances caused the “Islamic state” (banned in Russia — approx. ed.) to put control of the city at the head of their interests. That is why both times the decision to enter and occupy the city does not have been in doubt. In turn the Syrian leadership, who is well aware of the importance and prestige of the city, especially from a military point of view, was also not hesitated in raising forces for the liberation of the city. They twice managed to defeat the ISIL terrorists in Palmyra and return to the city under the protection of the state, but the last time the operation was more confident.

The first time ISIS troops entered the city in may 2015, the second — 11 December 2016. Despite the fact that the last time the occupation lasted no more than two months, this short time was enough to destroy the most important historical monuments of the city.

Release operation Palmyra the second time was a lot shorter and easier than the first operation in 2015. From the point of view of Finance it also was less costly. Why?

Local sources told Al-Ahed parts of the day when “Islamic state” occupied the Palmyra a second time, and also about the operation of her release. According to them, “the city of Palmyra attacked around 1,500 Islamic State fighters, most of whom were mobilized in raqqa and Mosul. Base was in the town of Sukhna, which is located 70 kilometers from Palmyra. There was also organized the mobilization and equipping troops and was the headquarters of the leadership, which conducted the operation, ended up swift and sudden, even to the leaders of ISIS. The source added that the attacking ISIS forces moved deeper into 90 miles meters to the walls of the T4 military airport in the desert East of HOMS. In the future, was the dispersion of troops in a large desert, and it became impossible to establish the exact number of militants. Despite the fact that their number was sufficient to capture Palmyra, they are unable to overcome the vast spaces of the desert through which they had to go a few days.

Local sources reported that in order to repel the attacks of the army of the Islamic state, the Syrian army, in cooperation with its allies formed a military line of defence from the airport T4. Force troops and the allies arrived promptly. Also at the airport there arrived the Deputy chief of staff of the Syrian army, which is the delegate of the Syrian President, with orders not to retreat a single step. At this time Russian and Syrian air force began an active bombing against ISIL targets. Began surrounded Palmyra with the goal of a counter-offensive. It was decided that to go to Palmyra’s only the Syrian army, the allies will just cover up and keep fighting on other fronts. Soon the defense line of the airport began reconnaissance attacks against ISIL targets. It was monitored the communications of insurgents with the guidance on which it became clear that among the leadership there is no unanimity or clarity about the goals of the operation: they were concerned about to begin the battle in the East of Mosul. Turkey, taking advantage of the presence of elite forces ISIS in Palmyra, decides quickly to carry out the attack in the town of al-Bab near Aleppo. Began a massive offensive by the Turkish troops and military formations of the “Shield of the Euphrates” on the positions of ISIS in al-Bab. The source also added that one of the ISIS militants, a Saudi nationality, is in the hands of the Syrian army. He confirmed the conviction of the ISIS militants and the inability to get to the airport T4 and noted that the military command of ISIS has lost the ability to organize forces at the fronts and, consequently, battle in the desert, Palmyra is lost. He also said that they asked their guidance regarding further action once they reach the airport T4. However, the response they received in connection with the great schism, which took place in the leadership of ISIS in the battles in Mosul and al-Bab and the retreat of ISIS in Iraq, particularly in Mosul.

Local sources confirmed that the decision on the return of Palmyra was made by Russian and Syrian sides quickly. The plan was to head towards the city and take control of the main height, and then enter a direct route to the city, not closer to the surrounding villages. The calculation was that the liberation of Palmyra will automatically lead to the surrender of the neighboring points. The sources explained that the leaders of ISIL suddenly mobilized most of their troops in the direction of al-Bab and Mosul, which eventually had a decisive role in the defeat of ISIS. They left the rest of the army scattered across the desert of Palmyra to those made when you begin the actual attack. The attacking forces of the Syrian army was faced with not one United front, and with several disparate fronts. At this time, the forces of ISIS passed Palmyra and the remaining militants retreated in the direction of the city Sukhna. Ultimately, the forces of the Syrian army triumphantly entered the city on the ashes of the “Islamic state”.