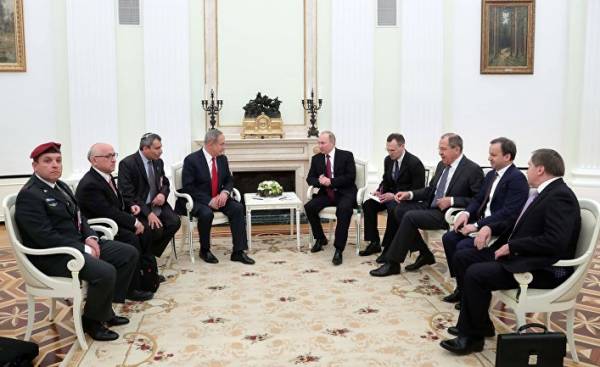 The last visit of Prime Minister of Israel Benjamin Netanyahu to Moscow differs from all previous ones: the dialogues are held tete-a-tete and affect Syrian policy. Tel Aviv is ready to expand international relations with the aim of reducing the pressure on Israel.

During the meeting of the Council of Ministers, Netanyahu left no doubt about the objectives of his visit. He explained that “to Express disagreement about the possibility of the military involvement of Iran in resolving the conflict in Syria and its attempt gradual deployment of the front before us (Israel) in the Golan heights (a disputed territory between Israel and Syria, now controlled by Israel — approx. ed.)”. In addition, agreements were reached on the possible collision of the Russian and Israeli forces.

Thanks to the victories of the Syrian army and its allies had recovered control of Aleppo. Israel has granted political security on the Northern borders, though it was not in his plans.

The most serious for Israel in this situation is a diminishing window of opportunity to radically change the course of events in the region, and thus do not fulfill their commitments to the armed and terrorist groups. No doubt these issues are on the agenda in the public security authorities in tel Aviv. They also relate to strategic threats emanating from the centre of resistance on its internal territories (Palestine), the extension of the “belt Hezbollah” in the North and East of Lebanon, and to strengthen links between the centres of resistance.

In turn, changes in the situation are pushing tel Aviv to search for an alternative. At least Israel should try to mitigate the consequences of the victory of the resistance forces on its national security system.

Since the beginning of events in Syria, tel Aviv has become increasingly aware that he is sinking into the Syrian quagmire. We can say that Israeli analysts in the security field, carefully studied the scenario of Libya, was able to “find” the regional agreement, which will allow you to control the conflict in Syria. That is why they are striving to avoid any “sharp corners” that occurs when you try to reignite conflict. Thus, Israel is trying to be pragmatic and using all means and techniques in order to confront Hezbollah in Lebanon.

The decision to restrict the use of the armed forces does not allow Israel to carry out large-scale military action. This prompted tel Aviv to bet on the effectiveness of international and regional decisions of the most influential countries. However, the decline of the US role in Syria in particular and the region in General and the entry of Russia in this conflict have been shown to influence the situation in Syria is impossible without direct participation in the conflict.

It should be noted that relations between tel Aviv and Moscow there are some difficulties. Both sides seek to strengthen relations on all levels, but the choice of allies each country contradicts the interests of the other party. In the case of Syria, the position of Russia contributed to the strengthening of relations between the parties are more than jeopardized the national security of Israel. The result is that both countries are interested in coordination and collaboration, consistent with the objectives and priorities of each of them.

The Israeli “deal” follows from a particular vision of Russian-Iranian relations. Herzi Ha-Levi — major General, head of the intelligence Directorate of the General staff — spoke to the Committee on foreign Affairs and defense: “Hezbollah and Iran are strategic partners of Russia, they are just a tool to achieve her own goals.” In this statement lies the essence of the Israeli “deal”. The differences between the parties may increase, including in the light of a possible victory of the resistance, which will necessarily affect the activities of Israel. All these issues will be discussed during the meeting with President Vladimir Putin.

Israel’s problem is that his aspirations and desires do not match what is happening in this area. And emerging political agreements limit the possibility of direct or indirect influence of tel Aviv on the course of events. Despite the fact that Russia is an important and main factor in resolving the conflict in Syria, she does not have absolute power. The reason for this is that there are a number of key partners, thanks to whom the victory was won. However, they also have serious conflicts and contradictions.

Thanks to the agreement governing the situation in Syria, you can understand that there is a gap between the minimum, which meets the demands of Israel and the high, which can provide Russia. However, there is a place for alternatives, which can be seen in tel Aviv and beyond. What at first may disagree with the Israeli leadership, then “adapted” and was adopted because of the limited options, fear of them or out of simple haste. Israel can become a member of what up until now he tried to avoid.

It remains to note the fact that Israel came to a standstill in the negotiations with Moscow. The authorities believe that a military intervention in order to influence the conflict in Syria will not bring any radical changes, even after winning the election and appointment of the new US President Donald trump.