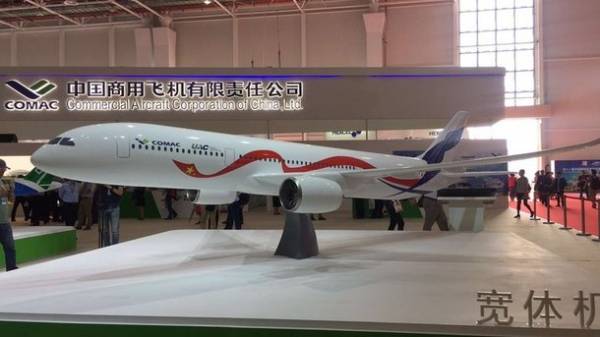 A preliminary agreement on the development of Russian-Chinese airliner, which has index C929, was signed in 2014 and the main contract a year ago. According to preliminary estimates, the aircraft is designed to carry up to 280 passengers for a distance of 12 thousand kilometers. It will be equipped with two turbofan jet engines with a thrust of about 345 kilonewtons of thrust, which at first can be American General Electric and Pratt & Whitney, and then the Russian PD-35.

It is reported that thus, the KLA and COMAC are counting on the competition with popular wide-body passenger aircraft Boeing 777 and Airbus A330. The first is capable to contain from 305 to 550 passengers and has a range from 9100 to 17500 kilometers and the second from 246 to 300 passengers and can travel up to 13500 km. At least 50% of the aircraft will be made of modern composite materials.

It is noted that Russian designers will develop the project a composite wing and its mechanization, the suspension system of the engines and main landing gear. The Chinese experts responsible for the development of the fuselage, horizontal and vertical stabilizers, nose cone and nose gear. However, the parties did not identify the name of the prospective Russian-Chinese aircraft, so designates it as COMAC C929, and KLA — how SFDMS (wide-body long-haul aircraft).