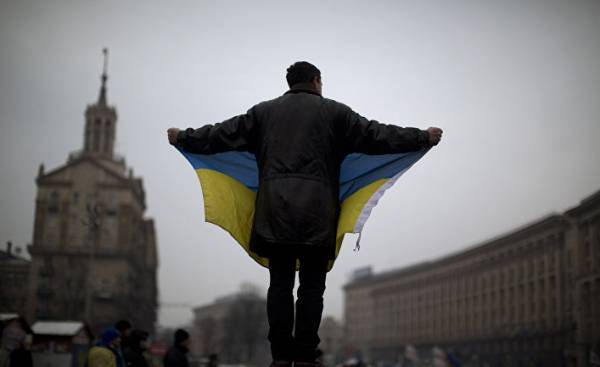 “Three years ago,” it starts with a considerable part of the resonant texts published in 2017. Today Ukraine remembers and interprets the historical events of three years ago: revolutionary opposition in Kiev, the victory of the Maidan, Russian annexation of Crimea.

Mentally traveling in time, we try to draw lessons from the experience. But perhaps the main lesson to Ukraine, linked with the concept of “time”. All we had to see how it is relative, and how much may have changed its quality characteristics.

In the first 22 years of Ukrainian independence remained blurred and stretched — it was measured even years, but decades. The time reserves seemed inexhaustible, it did not seem a great value, and his loss of the country treated philosophically.

Failed to reform Ukraine after the Orange revolution? Yes, it’s a shame, but we will have other opportunities.

Not received a membership action plan at the Bucharest NATO summit? Nothing else will join the Alliance, will he not go anywhere.

The presidential elections were won by the odious Viktor Yanukovych? Okay, wait five years and then pick someone better…

Euromaidan and the hybrid aggression tore the country from the usual temporal rhythm.

Ukrainian time suddenly accelerated and tightened to the limit, forcing us to appreciate every day and moment. From the first peaceful tea party in the capital until the first battles in the Donbass was less than five months and in this period of fit events, which would be enough for a history book.

Not gone through the shock after the unprecedented for Ukraine crackdown on protesters, followed by a shocking death on the Grushevsky street.

Did not have time in Kiev to celebrate the flight of Yanukovych in Crimea were Russian special forces.

No time to recover after the annexation of the Peninsula, in the East of the country began a bloody war with tanks and “Grad”.

The contrast between the former time and the new reality completely demoralized Ukrainian citizen. For millions of our citizens happening was a disaster. However, the active part of society adapted to the new temporal format quickly and willingly.

Mad dynamics of events stunned, but at the same time reassuring us. Many thought that Gordian knot, tying with incredible speed, going as fast split.

If the Crimea was cut off in a few weeks, and the return of the Peninsula will not take much time.

If the Yanukovych regime fell after three months of street protests, and Putin’s regime is about to fall under the Western onslaught.

If the volunteers and the volunteers were able to quickly create a new army from scratch, and all Ukrainian state will be transformed in the blink of an eye. In 2014, time is condensed so that even a promise to end anti-terrorist operation “for the watch” didn’t look fantastic.

Historical scenery frantically followed each other, and active Ukraine was looking forward to the denouement — but do not wait.

Worth it to get used to the extremely compressed time as it began to liquefy, become viscous, depriving us the opportunity to make quick decisions. It turned out that the hostile Putin’s Russia will not collapse from day to day. Hybrid confrontation with the Kremlin and the return of the seized territories is the game in the long. What country at war has to be reformed step by step, his teeth, overcoming the inertia of the political elites and lay masses.

Time has not lost its values, acquired in 2014, and each day is still precious and important for Ukraine, but there are thousands of important days. And take it all in was much harder than to adapt to the crazy pace of three years ago.

The year 2014 became for Ukraine a sprint, requiring from companies a tremendous effort. Domestic passionaries coped with this challenge. And then replace the sprint came the marathon is less severe, but spans across years and requires additional qualities.

Enough to sprint ahead: the need to balance their power with distance. Not enough to be energetic: you need to be tough. A little courage and determination: we need perseverance and endurance. But, in the role of sprinters, many of us were never able to become a good marathon.

A significant part of society is not ready for years to maneuver in the international arena and to fight for the conviction of each of the high — ranking corrupt, without respite and without hope for a quick victory.

Ideal for thousands of movers remains temporary rhythm, set in 2014. Extremely accelerated time revealed their potential, made them the creators of history, has rewarded their efforts and sacrifices an anticipation of the interchange. And now they want one — at any price to return to this compacted time.

In Ukraine announced a lot of recipes, supposedly allowing you to boost tarried an old story. To go on the offensive in the Donbas. To officially withdraw from the occupied territories.

To push hard ultimatum to the Western allies. To radicalize internal humanitarian policy. Immediately to arrange the third Maidan. And so on and so forth.

Often populist initiatives contradict each other, but unites them one thing — they are designed to create the illusion of accelerated time. Alas, this illusion will only exist in our imagination and the time that the current around us, will remain unchanged.

Trying unilaterally to turn the marathon into a sprint, Ukraine will squander its limited resources are exhausted and will collapse long before the finish. Not everyone can or want to understand it.

Three years hybrid war taught Ukrainians a lot. But most importantly, what remains to learn is to work with historical time. The ability to feel its capricious rhythm.

To understand when it requires us to wait-and-see strategy, and when urgent action. With equal readiness to meet his jumps and slowing down, not being late and not ahead of the event.

It is pointless to argue about is whether the time in Ukraine or against us. Because time always plays someone who goes up with him, — whatever bizarre metamorphosis it has undergone.