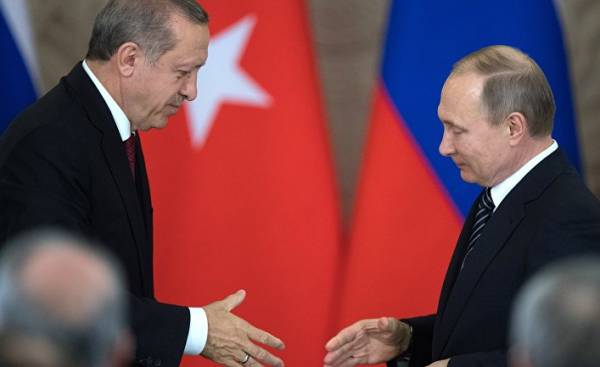 On March 10, 2017 in Moscow, finally took place the meeting of Russian-Turkish cooperation Council of the highest level, which after the destruction of Turkey Russian aircraft 24 Nov 2015 couldn’t manage to spend.

President Erdogan at a joint press conference with President Putin following the summit noted with satisfaction that “the stage of normalization of relations left behind,” and bilateral cooperation back to the good old days.

Putin, though he was not as optimistic, still positively noted that “Russian-Turkish relations is very quick to recover”.

But is this really so? In my opinion, not at all. I don’t agree with either Erdogan or Putin.

Of course, in bilateral relations, there is a definite movement forward. But small. And quite difficult.

Neither the word “quickly,” said the Russian President nor the thesis of President erdoğan that “relations are fully normalized and returned to its former state” does not reflect reality.

What is left of the summit?

In an article published in yesterday’s issue of the newspaper “Kommersant”, our Russian colleague named Andrei Kolesnikov ironically about the fact that Putin’s statement about “the abolition of work visas for employees of Turkish companies” was countered by some inspired Turkish journalists as “historic”.

And Kolesnikov could not agree more.

The main outcome of the summit is “a slight improvement” on the issue of visas and work permit?

Or is it decisions, many of which have been voiced previously and/or was considered a gesture of goodwill, dictated by prudence? (The summit had adopted a number of decisions from the intergovernmental agreement on the medium-term trade-economic, scientific-technical and cultural cooperation in 2017-2020 years before the announcement of 2019 cross-year of culture and tourism of Russia and Turkey, from the establishment of a joint investment Fund between the two countries prior to the signing of the cooperation agreement between the Anadolu Ajansı and TASS).

Well, but was overcome the obstacles facing bilateral trade? Moscow has demonstrated its intention to fully lift the sanctions? No!

How can you be so calm about the purpose of “bilateral trade turnover to 100 billion dollars”, which is already so fed up over the years?

Turnover in 2008 reached $ 38 billion, in the future could come close to this level. And in recent years it generally has been steadily falling (the incident with the “destruction of the aircraft” is not the only factor here). Last year turnover fell by 32% compared to the previous year, to $ 17 billion. In these circumstances, isn’t it strange that people still continue to say: “We will reach 100 billion”?

Moscow allowed the import of some agricultural products. But not the most important. “The problem of tomatoes” continues to be one of the obstacles to the development of trade relations.

Tourism reigns Supreme are relatively optimistic atmosphere. Many of those who this year expects a record growth in the number of Russian tourists.

But this and other areas actually are under the influence of a single question: Turkish-Russian cooperation in Syria.

Yes, military-political cooperation, which began to develop surprisingly quickly after Ankara apologized to Moscow, Syria has been important progress has been made. Between the two countries that support the forces on the various fronts of the war was achieved due to successful coordination. Turkey has achieved advanced positions in Syria, where she entered after obtaining the permission of Russia. Became one of the most important participants of the Astana process.

But this is a dangerous game. The sparks of war at times confronted the two sides with each other or the forces that supported these two parties (the Free Syrian army and the armed forces of the Damascus).

Turkey is acting like all is not going to get out of Syria.

Russia ultimately wants to end the civil war in Syria, the rule of the Assad administration throughout the country, and guarantees its political and military presence there.

This does not fit with the plans of Ankara in the region, and its anti-Kurdish policy.

Erdogan once again demanded “the closure of the office of the Party “Democratic Union” in Moscow.”

But could not get a positive response.

Interestingly, while the emergence of PYD insignia on the sleeves of the Russian military in Manbij shortly before the summit was the signal? Ankara is constrained in the interpretation of the signals from Moscow? Moreover, the United States is also concerned about the projects of Turkey in relation to the region and her desire to fight with the Kurds.

In these conditions, can occur dangerous events. These events may push Ankara with Moscow and Washington. Relations with Russia who are trying to restore, may again deteriorate. The early withdrawal of the Turkish armed forces from Syria will be the most favorable decision from all points of view. Otherwise, we have a bloody, risky, dangerous path.

The Kremlin, perhaps also seeing this situation, “deliberately trying to slow down” the process of returning the relations with Turkey to its former state. At every step in this direction, he is trying to get from Ankara concessions.

Moscow is not slow only in those issues that meet its own interests, such as the gas pipeline “Turkish stream”, NPP “Akkuyu”, talks about missile systems s-400…

I too pessimistic? I don’t think.

Turkish-Russian relations have been overcome dangerous tensions which arose after the incident, “November 24,” and included even the risk of military conflict. They continue to evolve, albeit slowly.

But this situation, as, in particular, showed the Moscow summit, doesn’t change the fact that bilateral relations are almost entirely in the shadow of military cooperation in Syria.

As soon as possible to make relations between Russia and Turkey ceased to be focused on Syria.