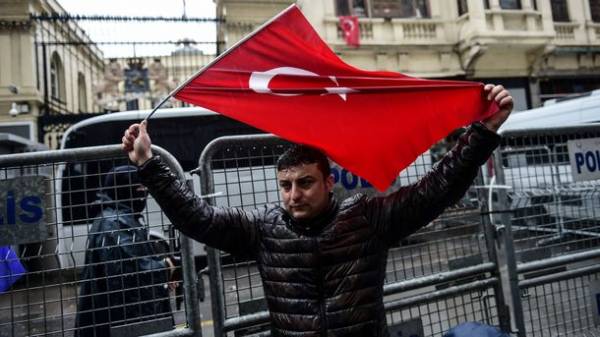 The demonstrators hoisted on Sunday the Turkish flag at the Dutch Consulate in Istanbul to the place of the flag of the Netherlands. On it informs Agency AFP.

Earlier it was reported that Turkish police blocked the entrances and exits to buildings of the Istanbul embassies of the Netherlands, for security reasons.

On Saturday, the Minister of family and social policy of Turkey Fatma Betul saillant Kaya arrived in Rotterdam by car from Germany to hold a campaign rally to bypass the decisions of local authorities. Law enforcement authorities denied her the opportunity to speak to the demonstrators and also blockaded the entrance to the Consulate building. The Dutch authorities declared her an undesirable alien. Kaya, accompanied by Dutch police and were deported to Germany, where he returned to Turkey.