Six-month-old baby on the roadside. Infants found the residents of Kramatorsk. Lying next to the mother in an unconscious state. Was the woman drunk. And such behavior is negligent mother – the norm.

Six months he found neighbors. The boy lay in an upside-down wheelchair on the side of a rural road. Nearby in the grass sleeping drunk mother. The police were summoned by passersby.

Mother’s six-month-old babies 28 years. In binges regularly, say the neighbors. May 9 was another reason. To celebrate went, taking with him his son. But to walk home. Ekaterina Markovna – grandmother and negligent mother. Recognized about the baby granddaughter didn’t care.

For little Sasha walk over fear and light scratches, doctors say children’s hospital. Bruises and fractures no. The boy is completely healthy.

To return the child to the mother the police are not in a hurry. Relatives don’t mind. The woman after the incident does not appear.

Police are now preparing documents for their transfer to the service for children. While the boy’s mother faces a fine. But after the woman, most likely, will deprive of the parental rights. 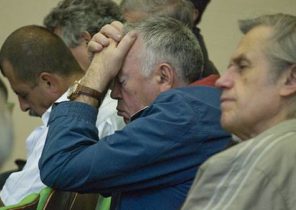